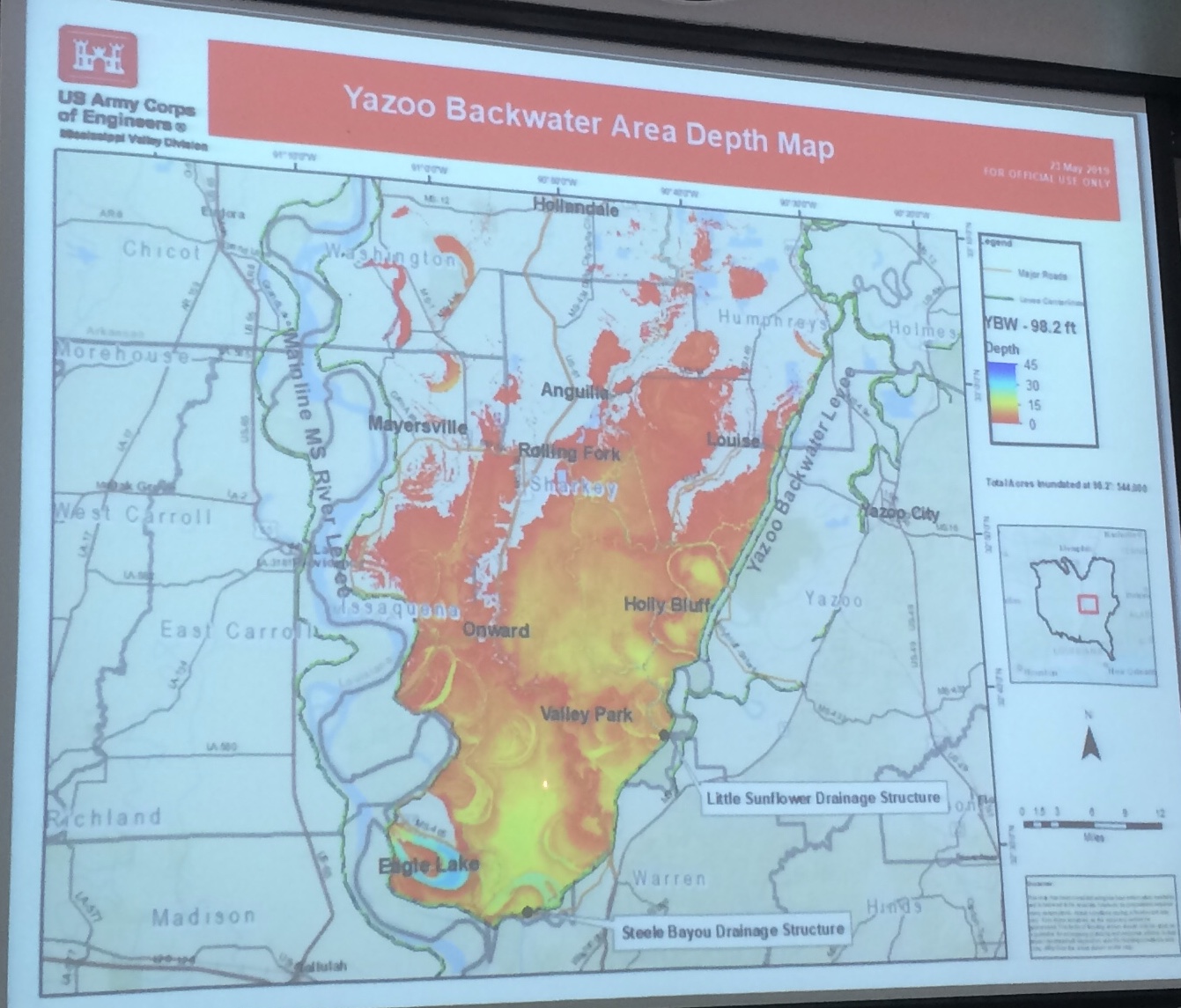 The controversial Yazoo Backwater Area pump project in the lower Mississippi Delta is again being advanced by the Army Corps of Engineers and the State of Mississippi. Much weight is given to a single new piece of Corps-sponsored research on soil moisture that the agency uses to conclude that a large pumping plant will not cause present wetland areas to change to non-wetland classification. The Corps's justification of the pumps on these wetland effects is presented in a new Supplemental EIS that could open the door for the Environmental Protection Agency to revisit and rescind its 2008 veto of the project under the Clean Water Act.

The Vicksburg Army Corps of Engineers District held a virtual public meeting November 10th to present data and take comments on the new Yazoo Backwater Area pump proposal, or the “Yazoo Pumps”. Colonel Robert Hilliard revealed that the Corps looks at it as a new project compared to the 2007 version of the pumps because of some supplemental water wells that have been added to the design. However this is the same size of pumping station as described in 2007 and it would be used the same way- to push water from the sump area of the Yazoo River basin into the Mississippi River when the Mississippi River is in major flood and the Yazoo Basin is walled off by levees and flood gates and its collected water can’t drain into the Mississippi River by gravity. The Corps meeting provided live answers to questions submitted on Facebook or via email. It remains clear that the Corps wants to design and build the Yazoo pumps.

‍
The Corps made some changes in response to the 2007 Environmental Impact Statement that showed harm to 67,000 acres of wetlands in the Yazoo Backwater Area (YBA), and was the subject of an EPA Clean Water Act veto that stopped the project. An updated 2020 draft Supplemental Environmental impact Statement (SEIS) for the Yazoo Backwater Pumps is on public notice until November 30th in the Federal Register. In the new SEIS, the Corps moved the pumps to a new location on Deer Creek, east of the old site, and used a 2019 wetland soil study, some new digital elevation methodology, and a different period of record (time frame shift). The Draft SEIS re-examines the re-located pump plant’s effect on the extent of YBA flooding and the impact to wetlands. The 2007 EPA veto that stopped the pump project was mainly justified on the large amount of altered wetland habitat (making wetland soils drier) that pumping would cause.

‍
Compared to 189,000 acres of flood impacts identified in 2007, the Army Corps is now claiming that only 82,981 acres will be flooded for more than 5% of the growing season. Finding new ridges (high spots) that they didn’t have the technology to detect in 2007 gave the Corps the ability to find 52,000 fewer acres that fit in the category of land flooding more than 5% of the growing season.

‍
Added to these “accounting” changes for affected acreage are conclusions pulled from  a Corps-sponsored forestry soil moisture study from 2019 (Berkowitz et. al) that sampled some limited areas in the Delta National Forest for wetland soil characteristics. This study concludes that the contribution of rainfall is more important to soil moisture levels in existing YBA wetlands than is flooding from rivers and streams. In other words, precipitation maintains more acres of wetlands than does overbank flooding. This conclusion, pulled from a single research paper, seems to be an important launch point for the Army Corps to again advance the Yazoo pump project. The paper was introduced this past summer, in the Notice of Intent published by the Corps ahead of the Yazoo Pumps Supplemental EIS. The Corps is relying on this one paper’s finding as a lynchpin to support the idea that installing pumps in the Yazoo Backwater Area won’t hurt the wetlands there if their soil moisture is maintained to a greater degree by precipitation than by overbank flooding. The majority of the SEIS hinges on the reliability and predictive power of this single paper’s finding. The research problem the paper was designed to answer was confined to limited sampling areas within the much larger Yazoo Backwater Area, but that hasn’t stopped the Corps’ SEIS from extending the results to the entire YBA.

‍
In the Corps’ 2007 Yazoo Pumps EIS, 67,000 acres of wetlands were predicted with modeling to shift to a drier condition and degrade in function if pumps were built. The main federal agencies, EPA, USFWS and the Corps were not in agreement among themselves about the modeled extent of the 2007 wetland impact. Now in 2020, the Army Corps has introduced new modeling, a new pump location, along with different acreage totals for projected wetland impacts. The Corps, using the new elevation mapping and research assumptions from the 2019 Berkowitz study, conclude now that a total of only 38,774 wetland acres will be similarly affected. So, the threat of drying (and degrading) wetlands due to changed flood duration, has been reduced from 104 square miles (67,000 ac.) to 59 square miles (38,774 ac.) which is still a big wetland impact from the pumps. At the public meeting, Corps staff offered some guarded language: “pump operation won’t convert wetland areas to non-wetland areas” which avoids having to say anything about secondary or indirect effects from pumping. The new modeling and its assumptions will again be examined by experts and there will likely be disputes about the extent of affected acreage.

‍
All one needs to do to see what happens when wetlands in farm country become drier is fly from Jackson, Mississippi to De Moines, Iowa. Over Mississippi, Arkansas, Missouri, Illinois and Iowa, on a clear day, the observer can see actively worked farm fields imposed over the outlines of creeks, ponds, oxbow lakes and river swamp margins that have been drained and planted in corn and soybeans. If the Army Corps builds pumps and the land undergoes long-term drying in the lower Yazoo River basin, it is clear what will happen to places that were formerly too wet to develop and cultivate. Broadly speaking, wetland acreage in all the states of the Mississippi River Basin continues a long-term retreat – sometimes hastened by projects like this one. The Army Corps of Engineers and Congress acknowledge a “no net loss” directive for wetlands, and yet conceive and advance projects like this that almost unavoidably deliver the opposite result, despite compensatory wetland mitigation.
‍

The Corps of Engineers stated in the summer of 2019, in the midst of the 2018-2019 flooding, that 68% of the Yazoo Backwater Area land that was under water in the long 2019 Mississippi River flood would still flood, even with the Yazoo Backwater pumps in place. Residents and farmers in five Counties in the lower Mississippi Delta have endured decades of problems from flooding. In the last ten years, the misery and economic hardship from the 2011 floods and the 2018-2019 floods are fresh in their memories, and problematic flooding happened in other years too. Farmers could not plow, plant or harvest their existing fields and an economic drag effect worked its way through the Lower Delta’s communities as a result. The area’s recreational economy felt the pinch too as private hunting leases and public land for deer and duck hunting were adversely affected.

The flood relief that all the property owners and residents in the YBA need and seem to want will take years to arrive if the pumps move ahead, but they won’t solve all the flooding problems. Colonel Hilliard’s opinion at the public meeting was that if the pumps are approved with no bumps or roadblocks, residents of the lower Delta will still have “four or five more seasons without pumps”. This agricultural way of measuring years gives a nod to farmers in the YBA who have much to gain from the pumps. The local governments, towns and residents could deal with more wet years in the Mississippi and Yazoo Basins, and more flooding while waiting for pump funding and construction. In the wake of the 2019 floods there has not been much local, state or federal emphasis on non-structural solutions to flooding, for example, elevating or flood-proofing roads, infrastructure, homes or businesses using post disaster grant funds from FEMA or other federal sources. Pumping its way out, at 100% federal cost, is what Mississippi seems to want.

Congress funds projects in the national interest, and Mississippi over almost 70 years, hasn’t been able to convince Congress to fund the Yazoo pumps. The state, with the help of the Army Corps, is again making its case for the pumps, and it remains to be seen if a project that solves only 32% of the flooding problem in a year like 2019, and still impacts 59 square miles of wetlands represents enough of a change for EPA to remove its 2008 veto and give the Army Corps and the residents and farmers in the Yazoo Backwater Area what they want.

Andrew Whitehurst is Healthy Gulf's water program director and covers wetlands and water quality in Mississippi and on the Northshore of Lake Pontchartrain.