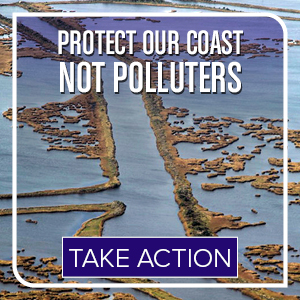 The Louisiana state Senate could vote as soon as today on legislation that would take away parishes’ ability to defend our wetlands - take action now!

The Louisiana state Senate could vote as soon as today on legislation that would take away parishes’ ability to defend our wetlands - take action now!

Louisiana’s state legislature reconvened this month, and oil & gas lobbyists have sprung into action to defend the interests of their industry, even at the expense of our coastal wetlands and the communities who depend on them. The legislature is considering at least two pieces of the legislation that would make it harder to hold the oil and gas industry accountable:

Don’t let industry lobbyists push through their agenda at the expense of our land, wildlife and communities - take action today!

Our southern parishes have filed suit for good reason: industry activities have directly contributed to the destruction of Louisiana’s wetlands and it will take immense financial resources to restore our state’s fragile coastal ecosystems. Moving forward, coastal restoration and water management will continue to be major employers in Louisiana and the success of coastal restoration is a life or death struggle for many of the communities in southern Louisiana.

In September 2019, after a five year push, mining giant Freeport-McMoRan Inc settled the first of these suits with a Baton Rouge firm representing coastal parishes. This was a groundbreaking deal that will result in the corporation paying out $100 million in cash and environmental credits that will be used to fund coastal restoration efforts. But this legislation could jeopardize that deal and make it much harder to hold other companies accountable.

Tell the Louisiana Senate to vote NO on SCR7 and SB359.