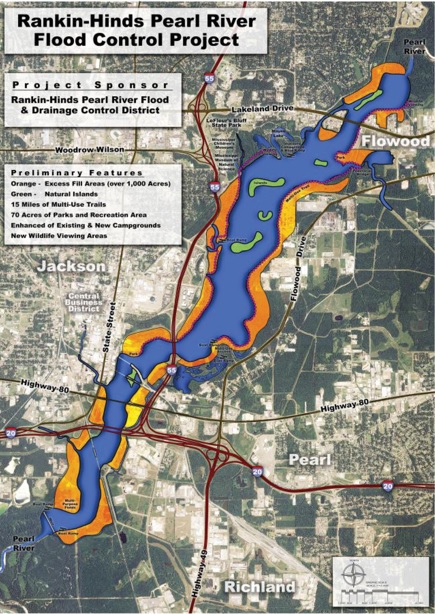 One Lake Update Summer 2021 Blog Part 1:After three years of waiting, a completed draft Environmental Impact Statement (DEIS) should be returned to the Army Secretary at the Pentagon in September for his review and a decison. The non-federal sponsors of the One Lake project have been quiet about the draft's progress and have rebuffed Freedom of Information Act requests.

Three years have elapsed since the last significant events in the saga of the destructive “One Lake Project” that proposes to dredge 10 miles of the Pearl River and install a dam to create a 1900-acre lake in the main channel of the Pearl River in Jackson under the guise of providing urban flood control. The project has evolved from an idea by a local developer in 1996 to a civil works project sponsored by a local levee board, The Rankin Hinds Pearl River Flood and Drainage Control District and promoted/funded by a non-profit partner, The Pearl River Vision Foundation.

‍
The late Senator Thad Cochran helped place the project in several annual versions of the Water Resources Development Act that funds Army Corps work around the nation.  Senator Roger Wicker, has been friendly to the project and is now seeking funding for Pearl River flood control (this project) in the infrastructure bills now active in Congress. The Rankin Hinds District’s Comment period closed on the Draft Environmental Impact Statement (DEIS) in September 2018, and since that time the Agency Technical Review (ATR) of the project by the Assistant Secretary of the Army for Civil Works (ASACW) has been a back and forth exercise with the lake sponsor’s contractors responding to review notes by the ASACW staff at the Pentagon. As the local, non-federal sponsor of One Lake, The Rankin-Hinds District currently anticipates it will complete its responses to the Army Secretary’s review comments by September 2021. The Army Secretary must then decide whether to reject One Lake, or accept the project from the Drainage District.

‍
This is a controversial project and has attracted 15 resolutions in opposition from downstream governments and towns, including six Counties and Parishes along the Pearl River, beginning at Monticello, in Lawrence County, MS. Sixty-five organizations representing conservation, faith, social justice, and businesses signed a 2018 letter opposing one lake.

‍
Several attempts have been made over the past two years to gain access to the ATR review documents to see what criticisms the Army staff review has leveled at the Rankin-Hinds District’s “One Lake” DEIS. Freedom of Information Act (FOIA) request letters were written both to Rankin-Hinds and the Army Secretary in the past two years, but while the review is ongoing, both agencies claim that the review notes fall under a statutory exception to FOIA requests. Until ATR is final, no FOIA requests will be filled, and the Rankin-Hinds District seems to be doing everything it can to drag out ATR indefinitely. The District does not welcome anyone looking over its shoulder at its cost/benefit analysis, flow modeling, engineering, or its wetlands and habitat mitigation plans. The Rankin-Hinds District is a public agency and has been extremely guarded about sharing information on the One Lake Project. The last piece of useful information Rankin-Hinds released was when it was shamed into publishing the Fish and Wildlife Coordination Act Report for the project on its website in the spring of 2020. The release came only after Audubon Mississippi, Healthy Gulf, Sierra Club and Mayor Martha Watts of Monticello held a riverside media event in March of 2020 to object to the narrative that Rankin-Hinds was offering about its project during a major flood event. We specifically asked for the Report, which was final and is a required review document produced by the U.S. Fish and Wildlife Service in a routine Army Corps of Engineers process of environmental review of federally funded civil works projects. The Rankin-Hinds District posted the Coordination Act report the next day.

‍
The problem is that the “One Lake” project is not in a routine Army Corps environmental review process. It's a hybrid process that has granted a public/private partnership special permission to act as non-federal sponsor, self-fund and publish the Environmental Impact Statement. The plan, since at least 2007, has always been for Rankin-Hinds to shepherd the One Lake plan through the environmental review process and then hand the project to the Vicksburg Army Corps of Engineers District to design and build, and then seek reimbursement for its environmental study expenses. The project construction would begin with $133 million of federal money authorized in the Water Resources Development Act (WRDA) from 2007, and then presumably seek more money along the way, including significant state money via bond issues, since Rankin-Hinds has ample taxing power to fund flood control. As non-federal sponsor and author of the DEIS, Rankin-Hinds has received $1 million in state money from the Mississippi Development Authority, while the non-profit Pearl River Vision Foundation has fundraised a few million more from the private sector to produce the DEIS and related studies. Can the Rankin-Hinds District really call the project “self-funded” when a million dollars of taxpayer’s money came from Mississippi Development Authority’s industrial development incentive grants?  Rankin-Hinds has taken every advantage of the special treatment Congress gave it through several yearly versions of the Water Resources Development Act (WRDA) in order to publish a highly subjective DEIS document that makes its “One Lake” project look like the inevitable choice, based on cost.

‍
To review what transpired three years ago, there were three alternatives developed and published in the 2018 Draft EIS: Alternative “A” – nonstructural measures such as building elevations and floodplain buyouts for $2 billion dollars, Alternative “B”, levee improvements for $720 million, and Alternative “C”, the lake, for $350 million. The U.S. Fish and Wildlife Service’s official review comments named the lake plan the “most environmentally damaging alternative” because of the filling of 1860 acres of wetlands, habitat loss, and channel dredging, but Rankin-Hinds is undeterred so far by any criticism. Alternative “B”, levees, includes $300 million for pumps which an analysis by the State Legislative PEER Committee determined are not necessary. Also, in 2018, there were infrastructure and hazardous waste mitigation costs left out of the Alternative “C” (lake) budget.

‍
Rankin Hinds’ EIS contractors, acting for the agency, raised the construction cost of the levee alternative(B) where they could, and clearly left costs out of the lake alternative(C) project’s budget to enhance its economic rank. The Draft EIS produced by Rankin Hinds is not an objective document, but it isn’t the only way that the lake sponsors and the state’s elected officials have tipped the scales toward the outcome they want. Find out more in Part 2 of this update next week.

‍
If you’d like to add your voice to the chorus against the One Lake project, here is an action letter to the Army Assistant Secretary for Civil Works at the Pentagon: click the link below. https://secure.everyaction.com/xc1HClG98EiYhH19oqaszA2