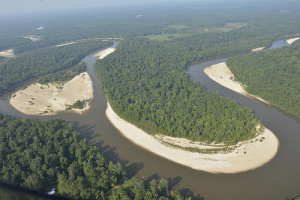 The comment period closed September 6th on the "One Lake" project's Draft Environmental Impact Statement. GRN and Tulane Environmental Law Clinic prepared comments that could anchor legal action against the Rankin Hinds Drainage District, but many other organizations and state agencies did a great job in writing thorough comments and GRN reserved the right to refer to any of them. All of the state agencies in Louisiana concerned with coastal resources prepared comment letters that State Senator Sharon Hewitt coordinated into a consolidated document. St. Tammany Parish's planning and development chief engineer, Dr. deEtte Smythe, performed an exhaustive analysis of the original USGS flow data on the Pearl from Jackson to Lake Borgne.

The National Wildlife Federation's senior environmental lawyer, Melissa Samet, produced a 56-page legal comment letter that spanned all the federal law issues involved in this damming and dredging project. A joint comment letter with 56 businesses and organizations was prepared by the One River No Lake Coalition.The Rankin Hinds Pearl River Flood and Drainage Control District is the project sponsor that wants to transform the Pearl River in Jackson, Mississippi into a 1900 acre urban lake by dredging the river deeper and wider, damming it and depositing the dredged material on top of existing riverbanks and floodplain wetlands in order to fill and elevate them for lakefront development.

The District held August public meetings in Jackson and Pearlington, Ms. and Slidell, La. and was called to Baton Rouge to make a presentation to the Joint House-Senate Legislative Lower Pearl River Ecosystem Task Force on August 16th. The Baton Rouge meeting was the only time that the Drainage District's leadership was forced to address an entire room with their answers to questions about their project. At the other three public meetings, after a scripted pro-lake presentation, meeting attendees were directed to different corners of a large noisy room to "issue tables" so they could try and yell their questions, over a noisy din, to engineers, attorneys or wildlife consultants. Official comments submitted at the Pearlington and Slidell meetings were overwhelmingly against the lake project.

Except for the presentation to Senator Hewitt's Joint Pearl Task Force, the Drainage District controlled the public comment process to their advantage. The Drainage District functions with taxing authority given to it by the Mississippi Legislature, and is a small state agency. State agencies are supposed to have honest, open processes when they propose publicly funded civil works projects. This one manipulated the due process meant to be afforded by the notice and comment framework. Due process was duly choked, as was the flow of public information on this very complex water project about which lots of people had legitimate questions.

In their stingy approach to public meetings and the information flow, the Drainage District worked against its own best interest. One example is what happened in Monticello, Mississippi.After the publication of the Draft EIS, and well before the end of the public comment period, Mayor Martha Watts of Monticello asked the Drainage District to hold a meeting in her town. The District's representatives said they would be happy to do this. The local Georgia Pacific paper mill employs more than 400 people, and Mayor Watts and the company have concerns about the mill being able to continue to withdraw and use water from the Pearl if another dam is built upstream.

After the Slidell and Baton Rouge meetings, the District did an about-face and informed Mayor Watts that it would not hold the promised Monticello meeting after all. She was not happy. She called me and asked if GRN and the One River No Lake Coalition would hold a Community Forum in her town. We'd presented two forums earlier in the year in Jackson and Gulfport - it was our way of dealing with the lack of reliable information coming from the Drainage District. The Coalition consists of GRN, Jackson Audubon, Mississippi Audubon, Pearl Riverkeeper, Sierra Club, Mississippi Commercial Fisheries United, and attorney Jayne Buttross. At our Monticello presentation we reached over 200 people, informing them about the project and how to prepare and send their own comment letters. But, there was a surprise at the meeting that nobody imagined. A commercial fisherman came up after the Monticello presentation to show me photographs on his cell phone of Gulf sturgeon that he had captured in his catfish nets in May of 2018. "The sturgeon are still here", he said.

This was significant because the Drainage District in its DEIS Endangered Species Act analysis went out of its way to emphasize that there were no recent confirmations of the existence of Gulf sturgeon in the section of the Pearl River above Bogalusa, Louisiana (where the Pool's Bluff sill blocks the river as part of decommissioned and idle lock and navigational canal system).The writers of this section of the DEIS discounted the importance of the upriver habitat to the sturgeon which is on the federally threatened list in the Endangered Species Act. This was a defense of their project - "we can't hurt the sturgeon's habitat if the fish doesn't make it this far up the river." The Drainage District did not do any independent sturgeon surveys, and they were all too enthusiastic in arguing that what they did to dredge, widen and dam the Pearl River simply wouldn't affect these fish because the downriver sills block their migration.

Of course, the existence of these sturgeon photos was joyfully shared with all of the groups and agencies that study this threatened fish species, and now we know definitively that what the Drainage District argued about the Gulf sturgeon in the DEIS is wrong. The meeting they refused to hold in Monticello ended up producing evidence of a fish that they said wasn't getting that far up the Pearl River. If the Drainage District had just given Mayor Watts the meeting she wanted, their staff likely would have been shown the sturgeon pictures too. If this had happened, the sturgeon photos, most likely, would have been quietly suppressed. State agencies that behave this way cannot be trusted and the taxpayers who support them have every reason to be suspicious.

Added to the good news about the sturgeon's recent occurrence in the upper Pearl River were other announcements at the end of the comment period or in the weeks afterward. Mississippi Congressman Bennie Thompson put out a September press release saying that he does not support the lake project and announced that he sent a long list of specific questions to the Drainage District and the Vicksburg District Corps of Engineers about the lake project's funding, justification and economic impacts. Congressman Thompson is unhappy about the project, and any support from him will have to be earned back, based on much better information. Again, the Drainage District could have done a much better job with keeping everyone informed about their project.

Louisiana Congressman Steve Scalise's staff, along with staff from the other members of the state's Congressional delegation, worked hard on placing language in the U.S. House version of America's Water Infrastructure Act of 2018 to protect the Pearl River. This bill language ensures that the Pearl River Basin Demonstration Project (The lake dredging project) has to be fully approved by the Army Secretary for Civil Works before any funding is appropriated, and language in the Act protects the Lower Pearl River from further degradation due to any upriver project on the Pearl. St. Tammany Parish Government along with La. Senators Sharon Hewitt, Beth Mizell and La. Representative Malinda White all worked with Congressman Scalise on the bill language. The Army Secretary is now on notice that the State of Louisiana has major concerns about this lake dredging project in Jackson.

In recent weeks, a comment letter to the Drainage District from the Mississippi Department of Transportation (MDOT) was obtained through a state public record request. The letter was short- two pages- but said that nine (9) road bridges crossing the Pearl in Jackson would all have to be replaced if a dredging project went forward. This is due to the loss of stability to bridge piers and supports if the river bottom characteristics are altered by dredging - something that should have been taken into account by the lake sponsors. And the costs for replacing these bridges were not included in the project cost estimates that the Drainage District published as part of its Draft EIS and Feasibility Study documents. Replacement of two interstate bridges (I-55) and (I-20) alone would add tens of millions of dollars to the price tag if the lake dredging project proceeds.The Drainage District had five years to write its DEIS and feasibility studies, yet it left bridge replacement costs out of its budget.

This October's issue of New Orleans Magazine has a cover story on this unpopular lake dredging project on the Pearl River: Save the Pearl, A River's Upstream Battle. It seems that even a month after the close of the comment period, the threat from this lake project is still on the minds of many people concerned with the ecological and economic health of the lower Pearl River.Gulf Restoration Network intends on keeping up the pressure on the decision makers at the Corps of Engineers who will decide by late 2019 whether the project can go forward.

Accordingly, two weekends ago at the Bogalusa Blues and Heritage Festival, GRN had a table near the front gate so it could begin asking for signatures on a petition to Army Assistant Secretary for Civil Works R.D. James. So far 64 people have signed postcards to Secretary James asking him to reject the lake dredging alternative and force the Rankin Hinds Drainage District to solve flooding in Jackson Mississippi with other options, like levees or floodplain buyouts.

The next steps in this process will be publication of a final Environmental Impact Statement by the Drainage District that incorporates all the comments received in the public notice process. The District says it hopes to publish its Final EIS late in 2018 or early in 2019. Comments can be made on this final EIS document. Then the project goes to the Army Secretary for Civil Works in Washington D.C. and a final decision by him is projected to happen in late 2019. GRN through the petition and by its organizing and publications will continue to oppose the damming and dredging of the Pearl River - The "One Lake" project in Jackson.