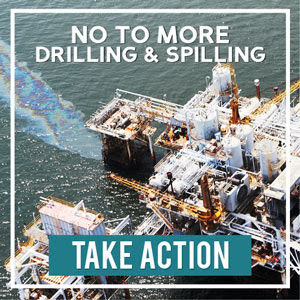 Last week, the Trump administration released a plan to open up nearly all U.S. water to oil and gas drilling. This news came on the heels of an announcement that Trump is rolling back protections, such as portions of the “well-control rule,” which were enacted to fix the problems that led to the BP drilling disaster.

Opening new areas to drilling while rolling back vital protections may make big oil happy, but it’s bad news for our coastal communities, the environment, and offshore workers. Take action to protect our coasts and people.

8 years ago, we experienced the largest oil drilling disaster in United States history. 11 offshore workers lost their lives, hundreds of millions of gallons of oil were spilled by BP, millions of animals were killed and people from all walks of life felt the economic fallout. We are still living with the consequences of that disaster.

How quickly some people have forgotten the hard lessons learned from that catastrophe. We refuse to forget. The “well-control rule” was one of the only actions taken to address the causes of the BP disaster and now the Trump administration is looking to roll back some of those vital protections.

Tell the administration “No” to more drilling and less safety!

The Gulf of Mexico continues to be a hotbed of offshore oil and gas activity. Every year, workers lose their lives offshore. Every year, there are new spills and accidents. Just last year, we experienced the largest spill since BP, with LLOG Exploration Company spewing upwards of 400,000 gallons of oil into the Gulf off the coast of Louisiana.

It’s insane that the Trump administration is looking to open new areas like the eastern Gulf, the Atlantic, the Pacific and the Arctic when big oil is already failing to prevent spills and accidents here in the Gulf. It’s doubly insane that Trump is coupling this big oil giveaway with a rollback of existing safety measures. We should be ramping up safety protections and ending all new leasing offshore, including in the Central and Western Gulf.

Tell the Trump administration no to more new drilling and spilling.