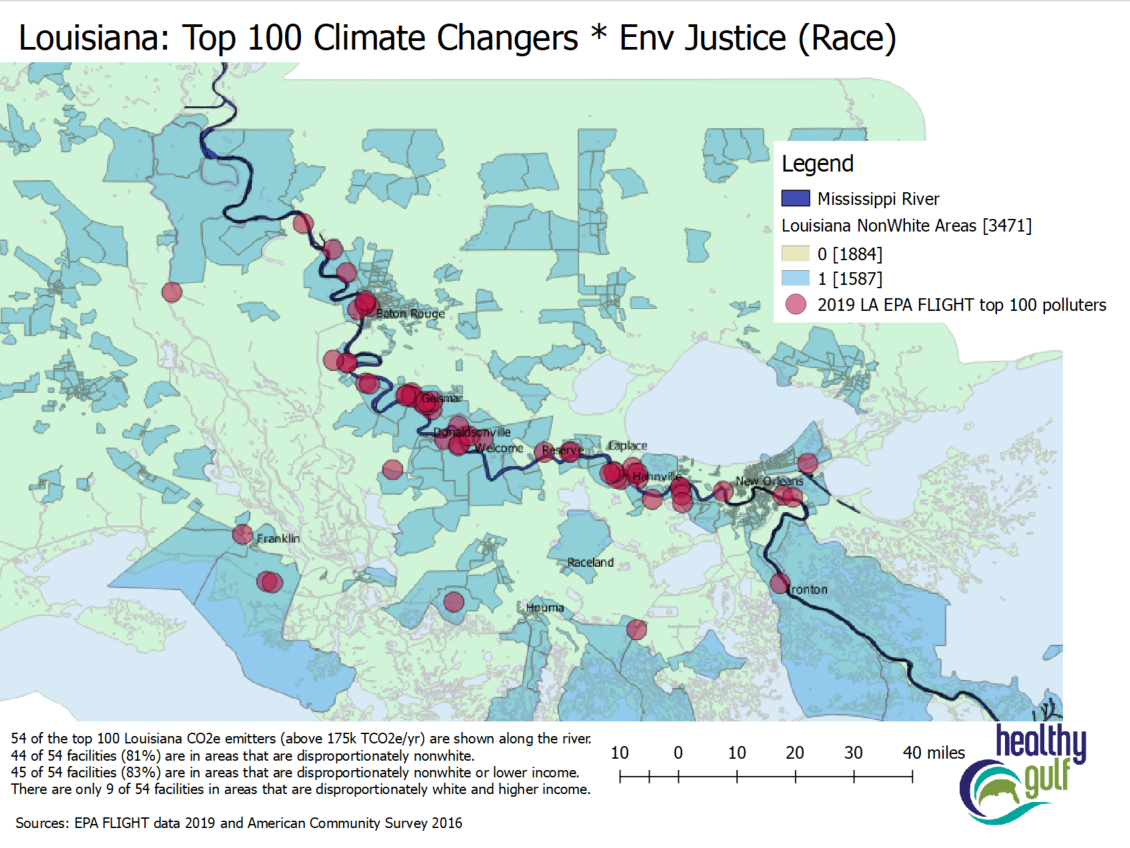 According to the Louisiana Governor's Climate Initiatives Task Force, 66% of the carbon pollution is from industrial commodities--not the facilities that power our homes and lives. Most of these facilities in Louisiana are in African-American towns and other socially overburdened communities.

Who are the top pollution emitters in Louisiana?

The Louisiana Governor's Climate Initiatives Task Force has a goal of reducing the net climate pollution from Louisiana to zero by 2050. But many of the largest polluters are well-represented on this task force, and those representatives are not speaking clearly about the large facilities that emit the largest fraction (~72% of 2005 data) of carbon pollution from the state.
‍

According to the Task Force's expert, 66% of the carbon pollution is from industrial commodities--not the facilities that power our homes and lives.

U.S. Environmental Protection Agency (USEPA) allows us to examine which facilities are large emitters, and where they are located. USEPA measures CO2 equivalent ("CO2e" or Tons of CO2 equivalent per year  "TCO2e/yr") emitted via the FLIGHT --the Facilities-Level Information on GreenHouse gases Tool. Although this reporting tool is limited to larger facilities--only facilities over 25k TCO2e/yr are required to report-- most of the larger facilities are listed. Three hundred sixty-seven of Louisiana's some four-hundred fifty petrochemical facilities and power plants are included. This dataset allows us to see which companies are responsible for changing the climate. For example, the main Westlake zip code--70669--emitted over 13 MTCO2e from 13 facilities in 2019.

Louisiana is just one part of the vast concentration of climate changers along I-10, and in the Gulf. In our ocean itself, facilities like Shell Mars and BP's Thunderhouse emitted over 6.57 MTCO2e, or more than one ExxonMobil Baton Rouge refinery. We can see that the Texas part of the I-10 corridor also has many large Exxon, Dow, and Formosa facilities in Houston, Beaumont and Port Arthur, and Louisiana has very large concentrations along the Mississippi River and in Lake Charles.

These are the Climate Changers. These are the companies that pollute our lungs and take our health. These must reduce their emissions to zero by 2050.

Recently, Dr Alex Kolker of the Louisiana Universities Marine Consortium published a simple report of the top CO2e emitters in the state of Louisiana.  There are 101 facilities in Louisiana which emit more than 200,000 Tons of CO2e annually.

Louisiana is also considering equity in how to reduce carbon emissions. Carbon isn't just emitted into the sky, it comes from smokestacks placed in particular neighborhoods. In Louisiana, the climate issue is an environmental justice issue. One way to see this is by looking at census data.

When we look at the demographics of a rural state like Louisiana, the best practices say that we should not just consider areas that are majority minority, or over 50% non-white. Many historic African American rural communities, such as Mossville, aren't majority Black. But they have a higher percentage of non-white residents than the parish in which they are located. The EPA and US Army Corps (page 72) have used this "meaningfully greater" method for determining rural environmental justice areas during their permit review process. At Healthy Gulf, we have made maps of these areas for Louisiana and Texas.

Below is a simple map of environmental justice block groups in Cancer Alley, an industrial corridor along the Mississippi River in Louisiana, that have a higher percentage of non-white residents than their parishes. This map also shows 54 of the top 100 Climate Changers. 44 of the 54 of the top emitters in Cancer Alley are within disparately non-white communities--African American towns along the river. 29 of 54, or just over half, are in disparately poor communities, Black or white. Only 9 facilities are in areas that are white and higher income.

When we look across the entire state, 58 of the top 100 Carbon emitting facilities are in Non-White block groups. 71 of the top 100 Climate Changers are either in a poor community, or a non-white community.

Anyway you cut it, this simple census screen shows that, again and again, more than 50% of the impacts are in communities that are overburdened. This pollution is a disparate impact on the most vulnerable communities, their lung health, and their economies.