Thank You for protecting the Gulf's deep-sea Corals 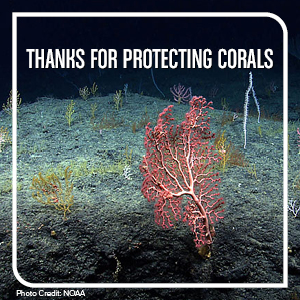 The actions of Healthy Gulf members and supporters helped send a coral protection message to the Gulf Council. Your Action alert letters made a difference!

‍
Comments from supporters like you on Coral Amendment 9 were part of the 18,000 public responses that reached the Council, highlighted the need and made this victory possible. This wave of public interest helped focus the Council members on protecting deep-sea habitats in the Gulf that are easy for a management agency to overlook because they are invisible and remote.

‍
The decision designates 21 sites covering 484 square miles as Habitat Areas of Particular Concern from Florida to Texas. Now, damaging fishing gear like trawls, traps, and anchored longlines, that break, dislodge, or smother corals, can’t be used in these scattered reef and canyon sites. Trolling and hook and line fishing will still be allowed, because these methods do not normally disrupt the deep ocean floor where these corals live.
Coral ecosystems need protection because they are fragile, slow growing and critical to the long term survival of a wide variety of other species of marine life. Once damaged, corals take centuries to recover.

‍
The final rule and the plan were issued October 16th, after six years of work. In 2014, the draft plan was written and went through multiple rounds of revision and public input. Initial approval by the Department of Commerce was in June of 2019, with final publication last month.

‍
Funding for the research and management of deep-sea corals is provided by a portion of the $20 billion settlement with BP, the company responsible for the Deepwater Horizon rig explosion in 2010 that caused an uncontrolled release of around 130 million gallons of crude oi into the Gulf of Mexico. Many deep-sea corals sites in the Gulf were harmed by BP’s oil in 2010, which makes it even more important that we protect this resource. As we celebrate this victory, we hope the Council and others consider protections for other precious and unique deep-sea coral sites in the Gulf.