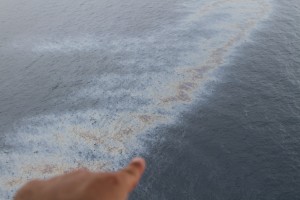 Last month, the federal government filed new reports suggesting that the Taylor Energy oil leak, which has been spewing oil into the Gulf for 14 years, is far larger than previously reported, and could be growing.

According to the filings, Taylor Energy is leaking between 10,000 to 30,000 gallons of oil daily. This represents a huge increase from previous government estimates. The Coast Guard previously estimated 16,000 gallons leaked in all of 2015 - so this new estimate is an over 2,200% increase!

Check out this excerpt (written by GRN’s Scott Eustis) from our recent report - Oil and Gas in the Gulf - to read more about Taylor and how it’s impacting the Gulf’s environment:

In 2017, the Taylor leak off the coast of Louisiana reached its 13th year. There’s enough oil left in the play that the leak could still be killing fishes and soiling sargassum seaweed 100 years from now.

2017 also saw the Bureau of Safety and Environmental Enforcement (BSEE), the main agency overseeing offshore safety, act to examine the environmental impacts of the Taylor leak for the first time. Taylor Energy claims that the government is incorrect, and that all oil from their 13 year old leak is “residual.” But every time Gulf Restoration Network and other members of the Gulf Monitoring Consortium fly to this location, we see the rainbow sheen spread for miles from this unique spot. Recent ROV surveys by BSEE confirmed two undersea plumes--far more oil being released than a residual release. Our partners at Skytruth have provided an invaluable service in tracking the rate of monitoring, and the size of the sheen over time; they estimate that Taylor has already spilled between a half a million and a million and a half gallons into Gulf Waters.

If it costs them money, the oil industry can be allergic to the truth; denial of basic science costs the Gulf Coast jobs, our economy, and our safety and welfare. We also documented oiling of sargassum – a kind of algal seaweed which is important habitat for endangered sea turtles. In 2017, GRN documented oiling of sargassum near the site of the Taylor Energy leak. Oiled sargassum represents exposure to many juvenile fishes and the small turtles that use the seaweed as a resting area as the seaweed drifts east and south along the Florida coast. Oil in the water and on the sargassum can reduce the oxygen in the water or change its temperature, stressing the small creatures that cling to it as a life raft. The chronic exposure to oil at the surface of the water can harm air-breathing creatures like turtles.

Although this type of harm has been established by federal authorities, specific response surveys must be designed to document the health of Gulf sea turtles and their rate of exposure. Until recently, Taylor was in denial that there were any environmental impacts of its 13-year leak. Given the political favor shown the Taylor Energy company, the burden of proof for its harm to endangered species will be much higher than for a company with tremendous public attention to its practices, like BP in 2010. It is urgent that advocates assist agencies and document any and all impacts to wildlife at this moment.

GRN and our partners SkyTruth and SouthWings have been monitoring this spill since 2010. Taylor Energy has claimed that only 2-3 gallons were leaking daily from the floor of the Gulf. That is a gross underestimation of the extent of this ongoing spill. This new report confirms what GRN has long suspected-- this spill is much larger, has more far-reaching ecological consequences, and will continue to spill until something is done to stop it. Taylor has requested that $423 million that they set aside for cleanup be returned. GRN believes these monies should continue to be held in the public’s hands until the oil stops flowing from the Taylor wells and a cleanup plan has been fully funded.