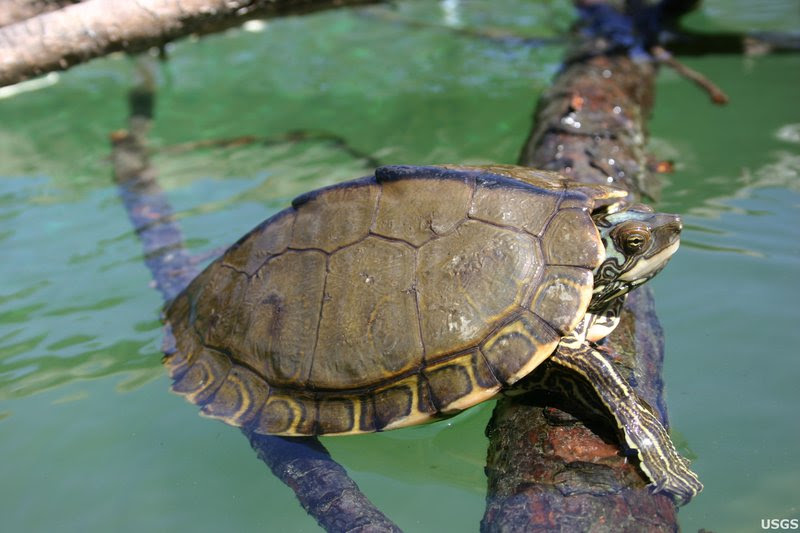 A recent federal court suit by Healthy Gulf and the Center for Biological Diversity resulted in a settlement that requiries the U.S. Fish and Wildlife Service to stop delaying the listing determination under the Endangered Species Act for two map turtles. These turtles are endemics in the Pearl and Pascagoula River systems, and have been surveyed recently for the health of their populations.

Healthy Gulf and the Center for Biological Diversity were successful in suing to require the U. S. Fish and Wildlife Service to perform a listing determination on the Pearl map turtle and Pascagoula map turtle to see if they should be afforded protections under the Endangered Species Act as a threatened or endangered species. This victory was announced earlier in July after the federal agency dragged its feet since 2012 on this needed action. The determination now has a deadline at the end of October 2021.

‍
Mississippi has endemic (confined to a single river system) turtles in both of its large coastal rivers. The Pascagoula and the Pearl Rivers each have two species of turtles ( 1 map turtle + 1 sawback turtle) that have been geographically isolated in those river systems for a long enough time that distinct species resulted. Before 2010, biologists believed that there were two endemic species in the Pascagoula and one in the Pearl, but that year, DNA research by scientists at the University of Southern Mississippi separated one of them, the Pascagoula map turtle, into two species. The endemic pairs are the Yellow blotched sawback turtle and the Pascagoula map turtle in the Pascagoula River and the Ringed sawback turtle and Pearl map turtle in the Pearl River. The two sawback turtles received protection under the Endangered Species Act (ESA) in 1986 (Ringed sawback), and 1991 (Yellow blotched sawback) when they were both classified as “threatened” so any federally funded project affecting their habitat must undergo an ESA consultation. The two map turtles haven’t been similarly evaluated for ESA protections, but will be by end of October 2021.

‍
Surveys completed in 2018 of turtle species in the Pascagoula and Pearl River basins focused on the genus Graptemys, (map turtles and sawback turtles) revealed that the Pearl map turtle was less abundant than the Pascagoula map turtle. (Lindeman et al. in press, see cite below) By several measures, the Pearl map turtle population is considered less robust, and a more likely candidate for receiving a designation as “threatened” under the Endangered Species Act, although both will be evaluated for protections under the ESA. The Pearl River, over its full length, has less protected habitat than the Pascagoula River, and has considerably greater harmful impacts from cities and people, measured as channel modifications, damming, and the inputs of treated sewage, industrial and urban runoff that reach its channel. For example, in 2019 and 2020, record volumes of partially treated and untreated sewage reached the Pearl River in Jackson, Mississippi. This happened despite EPA Clean Water Act enforcement for the last eight years including a federal consent decree mandating needed repairs to the Jackson sewer system. Greater protections for the Pearl map turtle seem justified by the recent survey results and the condition of its impaired home river. Also, map turtles are popular in the pet and aquarium hobby trades. Without protections, turtles from Mississippi and Louisiana are captured, shipped and sold in many countries. Listing under ESA would make selling them in the pet trade illegal.

‍
Turtles and rivers after the glaciers melted

‍
North American glaciers receded following the last Ice Age; as the ice melted, river systems swelled with the meltwater, became inter-connected and then became disconnected as flows decreased. Likewise, populations of aquatic animals and fish that were also once connected during long periods of abundant water and higher flow, became disconnected when those glacial flows decreased.  Over time, this separation caused speciation – long periods of isolation brought the separation into distinct species with distinct genetic profiles in separate river systems. The study of the ways that biology so closely follows geography is known as zoogeography. An endemic aquatic species is one confined to a single river system. Many scientists working in Southeastern U.S. rivers and streams have traced these patterns of speciation in native fish, and Mississippi’s coastal plain rivers provide big “laboratories” for turtle and fish zoogeography studies.

‍
In general, the presence of multiple endemic turtle species tells us that despite what we’ve done to cause harmful impacts to the Pearl, or other rivers, with damming and urban pollution, these endemic species have managed to persist since the end of last Ice Age. They’re still yielding clues to their biological history. The Pearl, the Pascagoula and the rivers of the Mobile Bay drainage each contain two endemic map turtles that tell the story of speciation in the rivers of the Southeast, a region known globally as an aquatic biodiversity hotspot for fresh water mussels, snails, crayfish, turtles and fish.