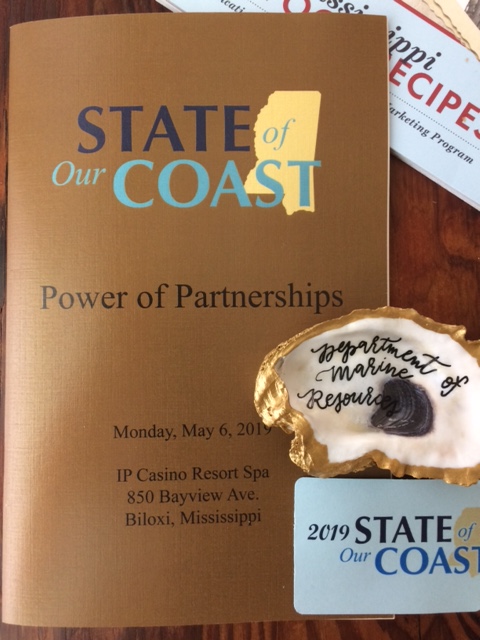 Features summaries of the main sessions presented by Miss Dept of Marine Resources at the May 6th State of our Coast conference in Biloxi Mississippi.

The Mississippi Department of Marine Resources continued its series of State of Our Coast conferences on May 6th in Biloxi. The theme was the “Power of Partnerships” and in that spirit, the MDMR shared a dual billing with Mississippi’s Emergency Management Agency. The State of our Coast merged with the MEMA "Partners in Preparedness" Summit that brought many emergency operations staff people to Biloxi. Governor Phil Bryant addressed both conferences at mid-day on day 1- Monday.

‍
Sessions on topics such as Port security, the Coast’s Economy, and National Flood Insurance Program (NFIP) County FEMA flood map revisions on the Mississippi Coast were mixed into a program that also offered speaker panels on oyster recovery and updates on restoration efforts using the various sources of money from the RESTORE Act and Deepwater Horizon Settlement funds.

‍
Dr. Paul Mickle, chief scientific officer for the Department of Marine Resources gave an overview of oyster recovery efforts on the Mississippi Coast. Mississippi’s strategy is to survey all possible methods for oyster recovery, test a suite of the most likely ones, and then using quantitative trial evidence, work to scale-up those that hold the most promise. Culturing oysters in controlled settings was one method that Mickle covered. Using “spat on substrate” or “seed oysters on substrate” methods allows bags of juvenile oysters to be grown for a limited period in lab conditions in tanks. Oysters are fed using lab-cultured algae before hatchery workers transfer the bagged live oysters onto reefs in coastal waters, or into off-bottom racks or cages like the ones constructed on the south side of Deer Island at the mouth of Biloxi Bay. There, the oysters should grow to marketable size within about two years.

‍
Erik Broussard of DMR’s Shellfish Bureau spoke of how oyster harvesting areas are classified. Approved oyster areas are open for harvest of consumable oysters. If an area doesn’t meet the “Approved” status, then, depending on the occurrence and concentration of fecal coliform bacteria, an area may be Conditionally Approved, Restricted or Prohibited from being harvested. Mississippi’s classification scheme mirrors federal law on the subject. Broussard reported that Biloxi Bay has been opened for oyster harvest this year for the first time in 50 years. Some oyster reefs in the Bay have changed from “Restricted” to “Conditionally Approved” based on monthly water quality samplings. However, the water quality status of an oyster reef in a given area is constantly monitored and can change due to rainfall, storm-water runoff, winds and tides.

‍
Dr. Kelly Lucas of USM's Thad Cochran Marine Aquaculture Center presented about harmful algal blooms, and about the state of Mississippi’s fledgling off-bottom oyster aquaculture efforts. Her facility at USM is an oyster hatchery that can produce early life stages of oysters, and feed them on lab-grown algae before they are allowed to attach to ground bits of shell in special troughs of water called spawning tables. When a bivalve like an oyster “drops its foot” it becomes attached to something hard and will continue to form a shell and grow larger. Bags of small attached oysters are moved live out of the hatchery and are placed on moored racks or baskets in the wild so they can begin filter feeding. Lucas said if the off-bottom growing systems in Mississippi are to catch on and increase, that the commercial hatchery business needs to be jump-started so it can supply the larval and attached oysters that can be transferred out into the cages moored in Mississippi Sound and bay waters. The bags of growing oysters moored on cables have to be tended by farmers and cleaned periodically – washed free of marine fouling film and sediment.

‍
Ryan Bradley of Mississippi Commercial Fisheries United and Jennifer Jenkins of Crystal Seas Seafood, an oyster packing and wholesale company gave the fishing and processing industry’s perspective on the challenges faced by Mississippi’s oyster industry. Oyster production is at an all-time low in Mississippi with only a few thousand sacks harvested in 2018 and 2019. If the Governor’s Oyster Council goal of a million sacks is to be reached, things must change. Bradley was hopeful that off-bottom farming in Mississippi could be successful and gave Alabama as an example of a program that is working and that has a head start of a couple years on Mississippi’s cable and basket off-bottom farm systems. He said that matching investors and oyster farmers was important and necessary because banks are not lining up to finance oyster farming, and the financing of oyster aquaculture operations by private investors is both new and not well understood.

‍
Ms. Jenkins spoke briefly of alternative technologies to reduce the occurrence of harmful vibrio bacteria in oysters offered for sale to be consumed raw. Quick freezing of oysters on the ½ shell and irradiation are being practiced to a limited degree. These are value-added methods that the oyster industry can offer restaurants and consumers concerned about avoiding exposure oyster eaters to the vibrio pathogen. She lamented the large inflows of Mississippi River water from the Bonnet Carre Spillway openings in 2018 and 2019 that have exposed western Miss. Sound oyster beds to unseasonally long periods of very low salinity water, causing widespread oyster mortality. As long as the Corps of Engineers opens the spillway to relieve pressure on the river levees in New Orleans, the wild oyster reefs in Hancock and Harrison Counties will suffer, including burial and silt fouling of the cultch material newly placed on the bottom by MDMR for restoration over the last few years. If the spillway operation in successive years is a new trend to be expected in Lake Pontchartrain, Lake Borgne and the western Mississippi Sound, then oyster growers will continue to face high mortalities and losses in these oyster growing areas. She said the low salinity prevents new seed oysters from being planted, further delaying reef recovery, and that she simply has to find other areas (states) from which to source the oysters that she buys.

‍
On another speaker panel, Chris Wells of MDEQ’s office of restoration did a short presentation about the recent projects begun using the various funding streams provided by the BP settlement: NRDA, RESTORE Act, NFWF, etc. He highlighted collaboration with other agencies and described some of the projects he considers success stories so far. The New Round Island construction project south of Pascagoula using dredge spoil, and the Hancock County Living Shoreline and marsh building project between the Pearl River and Bayou Caddy were two he featured. Also, Wells emphasized that the various sources of funding RESTORE, NRDA, NFWF have all been used in focusing on oyster recovery, whether to create new hard bottom reefs through cultch placement, build hatcheries, or construct an off-bottom oyster aquaculture pilot cage farm  in Mississippi near Deer Island’s south side. MDMR is also training oyster farmers on how to get involved in growing off-bottom cage oysters.

‍
Talks on permitting alternatives to traditional bulkheads, the “Tails N Scales” Red snapper recreational catch reporting system, the Grand Bay Estuarine Research Reserve mission, and current spending in the Tidelands Trust Fund rounded out the day of presentations by MDMR staff.  After the Governor gave his lunchtime talk, there was a dwindling of the afternoon audience, and overall there did not seem to be as many people in attendance for this year’s State of the Coast Conference as in years past. The spirits of the presenters didn’t seem dampened by the smaller audience, and the event offered plenty of good current information about Mississippi’s marine and coastal resources.

Andrew Whitehurst is the Water Program Director at Healthy Gulf.