Spillway Effects on Mississippi's Coastal Fisheries: How Bad is it? 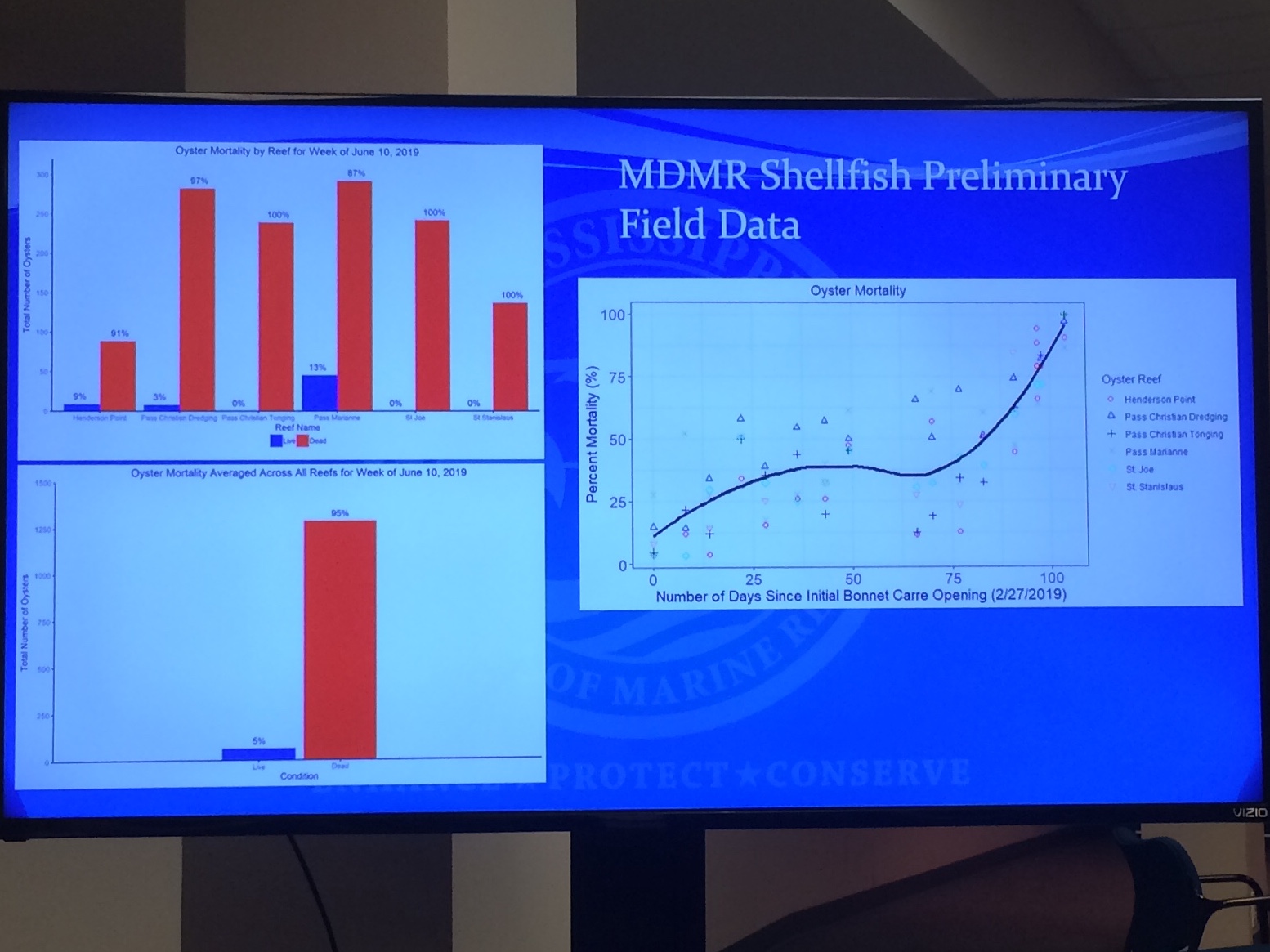 The crisis for Mississippi coastal fisheries due to the prolonged opening of the Bonnet Carre Spillway was discussed at MDMR's monthly meeting.

I attended the Mississippi DMR Commission meeting in Biloxi on Tuesday June 18th to hear the Agency’s perspective on the ongoing fishery crisis along the Mississippi Coast due to the opening of the Bonnet Carre Spillway. The spillway has been open longer in 2019 than any time in its history. The Mississippi River Watershed is now directly, but temporarily connected to the Pontchartrain and Mississippi Sound Systems, and so these coastal waters are flooded with fresh water from the river, which is laden with dissolved nutrients and everything else that is dissolved or suspended in Mississippi River water.

The fresh water influx into normally brackish coastal waters (with moderate salinity) has displaced fish, shellfish and invertebrates that could move; and for those like oysters that cannot, the extended exposure to fresh water has killed them. While some fish species such as redfish and striped mullet can function in a wide range of salinities, the majority of coastal/estuarine fish and shellfish species cannot live in fresh water for extended periods due to the metabolic stress it places on the way they regulate body/blood chemistry. Bottlenose dolphins and sea turtles have succumbed to problems due to suddenly having to live in nearly fresh water and have died in alarming numbers, with dolphins showing external signs of skin disease. Finding food is also a problem when many prey fish and organisms are also displaced due to changing salinity.

A growing concern is that the dissolved nitrogen and phosphorous (organic and inorganic nutrient) compounds in the water column, that eventually settle to the bottom attached to clay, silt and sediment particles will over-fertilize the free floating green algae or phytoplankton in coastal waters. This can cause massive population explosions for these single celled free floating photosynthetic organisms and when they die and decay, it can cause hypoxia (very low dissolved oxygen levels that kill marine life) and dead zones to appear in places that usually don’t have them. The phytoplankton “blooms” are now beginning to appear in the Mississippi Sound as coastal waters warm up into the high 80 and 90 degree ranges (F), and the resulting poor water quality is being seen along with the first of what could be many low dissolved oxygen events. The rest of the summer could be very tough on marine life due to these conditions.

‍
Below are my notes from this week’s Miss. Commission on Marine Resources meeting June 18th in Biloxi
‍


Since Governor Phil Bryant asked for the disaster declaration, a task force has been assembled to gather and distribute data and information. The agencies involved are MDMR, MEMA, MDEQ, Institute for Marine Mammal Studies (IMMS), Mississippi State University (Veterinary School animal necropsies), and University of Southern Miss and Gulf Coast Research Lab for water, and biological sampling.
Miss. Emergency Management Agency (MEMA) will do a daily and weekly Situation Report that will be available to the public. It goes to cities, agencies, Congress

‍
The spillway has been open longer than the previous record of 75 days. I think he said it’s at 83.
Salinity at stations at Merrill Shell Bank and Gulfport Light was 0 parts per thousand (ppt) from May 18- June 8th
Salinity at two of the eastern stations increased and reached 16 ppt due to a north wind event that pushed surface water offshore.
St. Joseph Point monitoring station has been below 2 ppt since March 16 and has never gone higher.

‍
As water temperatures rise, algal blooms are expected, and there was one reported on June 13th along the shoreline between Bayou Caddy and the Pearl River in Hancock County. Also on that same day a fish kill happened on the Hwy 90 beaches at Courthouse Road: 17 species of fish were found dead and there were several thousand counted.

‍
Dead crabs have been noticed in traps by MDMR samplers. This is a sign that the crab trap has been in water with dissolved oxygen levels below 3 ppt.
‍

‍
Brown Shrimp counts have been declining in size and abundance in test trawl samples. A count of 68 (68 shrimp per lb) is the standard to open brown shrimp season. Recently brown shrimp test trawl counts have been 90 shrimp/lb on June 10th,  100 shrimp/lb. June 13th, and 112 shrimp/lb on June 16th. Shrimp are not developing/molting from stage to stage and growing in a normal manner due to the stress of all the fresh water.

‍
Quantities of shrimp have been declining too in the cod-end bags of the test trawl samples. The most shrimp caught June 10th were 25 individuals in a 15 minute tow of a 16 foot test trawl.

‍
Ryan Bradley, Director of Mississippi Commercial Fishermen United made a proposal to open white shrimp season early so that fishermen can get a chance to catch some large ones that have been showing up in test trawls. The biologists and Commission members discussed this idea and agreed that these large shrimp will likely be overcome by hypoxia (low oxygen concentrations) in the coastal waters and want to allow the fishermen to catch them before the river water or hypoxia kills them. A regulation allows the Commission to open fishing seasons early to respond to an emergency and so the Commissioners made and voted on the following motion:

‍
“Due to the potential adverse effect on the shrimp industry caused by the Bonnet Carre Spillway, (the Commission will) open the shrimp season under the authority of MCA 49:15-64. 1(2) effective Thursday June 20 at 6:00 a.m.”

‍
The motion passed and Mississippi white shrimp season will open this week.

‍
Dr. Reed Hendon of the University of Southern Mississippi Marine Science Department talked to the Commission about the kind of sampling that USM/GCRL is doing through this crisis to document the fisheries disaster: water quality – 15 parameters looked at on each sample taken including nutrient levels, phytoplankton density and type, fisheries dependent and fisheries independent data, crab surveys, oyster settlement plates.
Hendon summarized the oyster problem: “we weren’t in a good place to start out with, and it’s just getting worse.”

‍
A NOAA satellite slide was show of Lake Pontchartrain, Lake Borgne and the Miss. Sound from this past Sunday. Algae blooms can be seen from space along part of Pontchartrain and in Lake Borgne in Louisiana.

‍
One public comment was offered by Ms. Thao Vu:

“This is the nail in the coffin for the fishing community”; she has heard reports from Vietnamese fishermen working on the water that oyster mortality is 100%, and she asked Commission to be pro-active and to come up with an emergency assistance program for commercial fishermen.