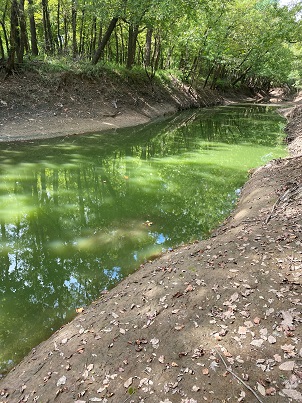 A September algae bloom on Eubanks Creek in Jackson, sparked by a sewage spill, shows what is happening on the Pearl River's urban tributaries. The implications for the Rankin Hinds Drainage District's One Lake plan are that nutrients from the urban creeks are easily captured in a wide, slow flowing lake section made by dredging and further damming the Pearl River. If Jackson's sewage issues are not addressed, the lake can grow the same kind of harmful algae blooms as Eubanks Creek.

Eubanks Creek suffered a sewage spill earlier this month while the City of Jackson worked on a large sewage collection line near the Creek that collapsed and leaked directly into it. I observed Eubanks Creek often during the eleven years I was on the research staff of the Museum of Natural Science located in Jackson’s LeFleur’s Bluff State Park. I often observed cloudy, gray water flowing in it that smells like a trifecta of sewage, household cleaners and cooking oil, but never witnessed a full scale algae bloom in the Creek.

‍
This month, there was such a bloom, which shows what can happen when conditions of low rainfall, low creek flow, high summer water temperatures and abundant “liquid fertilizer” come together. The human waste and other dissolved organic materials this month in tiny Eubanks Creek, now an urban drainage ditch, provided the nitrogen and phosphorous needed to kick-start the resident algae into a bright green, pea soup-colored bloom like the kind seen on sewage lagoons.

‍
A nearly year-round algae bloom of this type can be seen on the aerated sewage settling lagoons visible on the west side of I-55 near Canton, MS north of Jackson. This same telltale bright green color can be seen in the numerous catfish aquaculture ponds lining highways in the Mississippi Delta. Catfish pond water also contains excess nutrients from uneaten, wasted fish food pellets and the metabolic waste excreted by the fish living in high densities. Aquaculture ponds use supplemental mechanical aeration to prevent fatally low dissolved oxygen conditions for the fish raised in them.

‍
The harmful algae blooms that happened in the Mississippi Sound and Lake Pontchartrain in the wake of the 2019 Bonnet Carre Spillway opening, and several times since then, also illustrated on a regional scale what our coastal estuary phytoplankton (free-floating green algae) can do when over-stimulated by nutrients. In this case the source was dissolved farm fertilizer runoff from the upper Midwest in Mississippi River floodwaters diverted through Lake Pontchartrain into the Sound.
Another regional nutrient problem affecting Gulf waters happens when south Florida’s Lake Okeechobee sends pulses of nutrient laden water (farm field runoff), through drainage canals into Florida Bay, causing harmful algae blooms and “red tides”, killing millions of Gulf fish along the lower Florida Peninsula.

‍
The Gulf of Mexico Dead Zone is caused each summer by a massive algae bloom driven by the dissolved nitrogen and phosphorous-based nutrients in the Mississippi River when the brown, murky water hits the blue water of the Gulf under weather, wind and current conditions that allow a warm upper layer of fresher river water to ride on top of denser saltier water and generate massive phytoplankton ‘blooms’. The plankton blooms have short life cycles, die and sink to the bottom to decompose, taking up the available dissolved oxygen in the water. The bottom layer of Gulf water becomes so oxygen-poor that any marine life that cannot swim away simply dies in place.

‍
The lesson this month on Eubanks Creek in Jackson, Mississippi is that the nutrient problem starts local and small, but many small water quality problems can combine to make big ones. A caution on the Pearl River where Eubanks Creek eventually flows is that if the poorly conceived “One Lake” flood control project is ever built without the City of Jackson repairing all of its ageing broken sewage collection pipes, the new lake will capture the polluted flow of Eubanks Creek and nine other similar urban drainage creeks. Most of them are just as vulnerable as Eubanks Creek to sewage spills from failing sewer mains, and manholes overflowing with stormwater and sewage.

‍
The Rankin Hinds Drainage District’s 2018 Draft Environmental Impact Statement (DEIS) for the Pearl River “One Lake” project discussed river water quality sampled during a week in July 2014 with heavy afternoon thunderstorms over Jackson when flash-flooding urban creeks emptied into the river. Predictably, the urban runoff water flowing from the creeks into the Pearl River had elevated temperatures and low dissolved oxygen levels, below 5 parts per million, in violation of state water quality standards. The Drainage District offered no solution in its Draft EIS to this problem - urban runoff of stagnant, nutrient laden stormwater to the Pearl River.   Add to these conditions elevated levels of dissolved nutrients from sewage (the urban gray-water trifecta), and all the conditions are in place for algae blooms on urban tributaries and the main channel of the Pearl River.  The MDEQ already classifies the water in the Ross Barnett and Pearl River as eutrophic or over-enriched with dissolved organic substances, according to the agency’s 2015 Total Maximum Daily Load (TMDL) report on dissolved nutrients in the Pearl River. MDEQ tries to downplay the situation, but having a eutrophic drinking water source is not much of a selling feature for living in Jackson.

‍
Eubanks Creek, in September 2021, has provided a real-time example of an algae bloom under conditions of warm water, minimum flows and abundant dissolved nutrients, and this is likely only a hint of the true extent of the nutrient problems in the Pearl River and its urban tributaries in Rankin, Hinds and Madison Counties, and, importantly, for any lake project that would further dam the river’s urban section and impound these polluted flows.