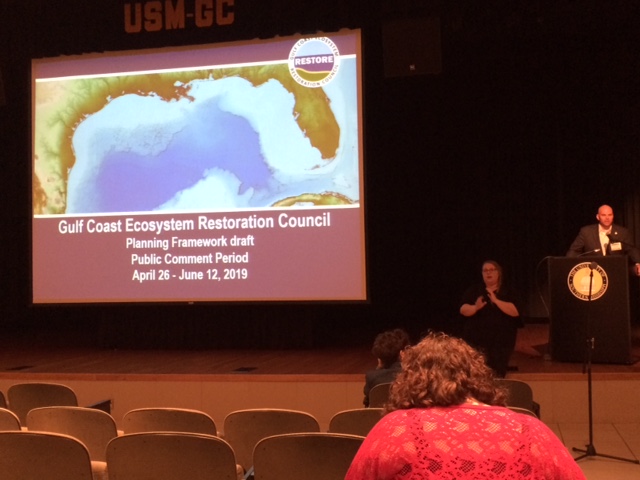 Healthy Gulf's write-up of the RESTORE Council's public comment meeting in Long Beach, Ms on their Planning Framework Draft for use in Funded Priority List 3 which will be published sometime in 2020. Comment period on this planning draft is open until June 12th, 2019.

‍
The Gulf Coast Ecosystem Restoration Council (RESTORE Council) and its members from the state of Mississippi hosted a public comment meeting in Long Beach, Mississippi May 22nd on the recently published Planning Framework Draft that will guide the process to create a third Funded Priorities List (FPL3) for Bucket 2 restoration projects. Restore Bucket 2 is that portion of projects chosen by Restore Council Members. The document was explained as a “bridge” between the broad goals of the 2016 Comprehensive Plan and this and future FPLs. The Bucket 2 projects are the Council-Selected Restoration Component – one of the several funding streams provided by the RESTORE Act negotiated in the BP settlement in the wake of the Deepwater Horizon Oil Spill Disaster.

‍
Examining the document in preparation for commenting was an exercise much like reading an Environmental Impact Statement or any other large, formal document required by a federal statute. The Planning Framework Draft was short on narrative and specific examples but followed a formula that repeated throughout: in this case it was a standard organization repeated across the various geographic regions of the five Gulf States. In each one of those regions, priority approaches were listed along with the conservation techniques that fit those approaches. For example, in the Mississippi Sound Region one of the four approaches was to restore oyster habitat using the following three techniques: substrate placement, living shorelines, and enhanced spawning and reserves. The full list of priority approaches used in this Planning Framework Draft are: 1) Create, restore, and enhance coastal wetlands, islands, shorelines, and headlands, 2) Protect and conserve coastal, estuarine, and riparian habitats, 3) Restore hydrology and natural processes, 4) Reduce excess nutrients and other pollutants to watersheds, and 5) Restore oyster habitat.

‍
The meeting hosts from the RESTORE Council included Chris Wells, restoration bureau director at the Mississippi Department of Environmental Quality, Ben Scaggs and Jean Cowan from the Council staff.  Homer Wilkes, the USDA’s Council Member and Steve Tucker Council member from the U.S. Coast Guard comprised the rest of the Council presence at the meeting. About 50 guests attended the meeting which ran from 6-8 p.m. at the auditorium on the USM Long Beach Campus. It was the smallest audience I’ve seen at any Mississippi meeting hosted by the RESTORE Council. At the end of the Council’s presentation on the Planning Framework Draft, nine people had filled out comment cards indicating they wished to present spoken comments. Two, a husband-wife pair, unattached to any group were the only independent private citizens who wished to speak, but they left before the verbal comment session started. The other seven were from Audubon Mississippi, Corps Network, North Gulfport Community Land Trust, Mississippi Commercial Fisheries United, and Mississippi Coalition for Vietnamese-American Fisher Folks and Families. Ben Scaggs and Chris Wells sat at a table on stage to accept the comments from those at a microphone.

‍
The meeting was a low-key affair - one reason for the light crowd was possibly due to the document itself. It is essentially an outline for a process of project selection that won’t officially produce a list of priorities (FPL3) until sometime in 2020 across five states. At this point, we can only speculate about the full set of project ideas that will be examined to build FPL3. In Mississippi, we know that the MDEQ hosts a restoration project portal on its website msrestoreteam.com/. The RESTORE Council may look at some existing projects submitted to the Mississippi project portal for the Mississippi Sound - or at new submissions, we really weren't told what to expect. In Louisiana, we know that restoration projects are selected from the CPRA Coastal Restoration Master Plan. Understanding what projects are proposed, and insight to the push and pull of vetting and selecting projects within the Restore Council itself were not subjects covered at the public meeting. A meeting on how the Council selects projects is a subject for another night and another time, but that meeting would offer more concrete details and would likely attract more than 50 people on a Wednesday evening in May.

‍
The spoken comments on the plan, by necessity, had to be very general because the plan didn’t offer lots of specifics. The most readily graspable part of the plan was the way it divided and sub-divided the geographical regions across the Gulf. It made 8 sub-areas out of the Gulf Coast. They are: 1) Texas; 2) Chenier Plain in TX-La; 3) Pontchartrain Basin in LA-MS; 4) Mississippi Sound, MS; 5) Mobile Bay and Mobile-Tensaw Delta in AL; 6) Perdido Bay and River in AL-FL; 7) Florida; and 8) Gulfwide.

‍
The two regions I know best are the Pontchartrain Basin and Mississippi Sound, and it is interesting to see the Council do a close focus on these two, and other particularized ecosystems that reach across state boundaries. The division into these sub-regions may elicit project submissions/selections that try to answer research questions or solve habitat or water quality problems having their own "neighborhood" or regional set of causes or circumstances. Until we see Funded Priority List 3 in 2020, we will not know what kind of proposed projects are advanced by the Council for their Bucket 2 funding or how they will fit the various geographic breakdowns. The plan the Council put forward, and which is still open for public comment until June 12th midnight MDT, seems a reasonable approach – a general, broad, flexible framework for relating restoration projects to habitats, species, ecological regions, watersheds, river systems or estuaries.