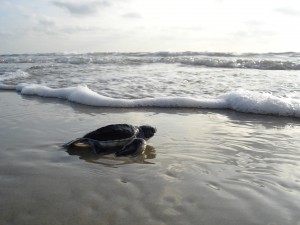 Many Americans have never heard of the Land and Water Conservation Fund (LWCF), despite the fact that it has enriched their lives for 50 years. The LWCF has been the main legislative vehicle for protection of public lands and waters, funding literally thousands of projects across the country. The Gulf Coast provides a vivid example of the benefits that the LWCF has delivered for America since its passage by Congress in 1964.

The network of National Wildlife Refuges across Gulf Coast states that have been created and/or improved by the LWCF is impressive: six in Alabama, fifteen in Florida, twelve in Louisiana, three in Mississippi, and nine in Texas. These include some critically important coastal refuges: Grand Bay in Alabama and Mississippi, St. Johns and St. Marks in Florida, Bayou Sauvage in Louisiana, and Aransas in Texas.

The LWCF also helped create the jewels of the National Seashore system located along the Gulf: Padre Island in Texas, and Gulf Islands in Florida and Mississippi. Add to these the National Parks (7) and National Forests (10) that have benefited, and some sense of the contribution of this little known law begins to emerge. Yet these sites only represent the federal side of the LWCF. The state component has funded thousands of state and local parks, recreation facilities, and historical sites across the Gulf States (over 700 projects in Louisiana alone).

These parks, refuges, and other sites are clearly important for coastal resilience in the highly vulnerable Gulf Coast region, where hurricanes and weather extremes have had major impacts. They also function as key assets in America's $730 billion outdoor recreation economy. Wildlife-related recreation contributes annually $2.2 billion for Alabama, $8.1 billion in Florida, $4.7 billion in Louisiana, $1.1 billion a year in Mississippi, and $9.2 billion in Texas.

Given this ongoing record of beneficial results for both the economy and the environment, the status of the Land and Water Conservation Fund would seem to be safe and secure. But in a political climate where hostility to public protection of land and water is strong, nothing is secured. The Fund draws most of its dollars from offshore oil production revenues rather than tax dollars. This includes a designated portion of revenues specified in the Gulf of Mexico Energy Security Act (GOMESA) of 2006, where LWCF receives 12.5%, while Gulf States receive 37.5%.

2018 is a critical year for the LWCF in an additional way - Congress has allowed the law authorizing the LWCF to expire and we must fight to change that. Given the benefits that the LWCF has provided to the Gulf Coast - and can continue to provide in the future - keeping the law intact as it was designed seems the most sensible course, as well as the option with the broadest national support.

Contact your Congressional representatives and let them know you support reauthorization of the Land and Water Conservation Fund, and the best level of funding possible for this landmark law.

LWCF in Your State: