Public has the opportunity to weigh in on coral protections 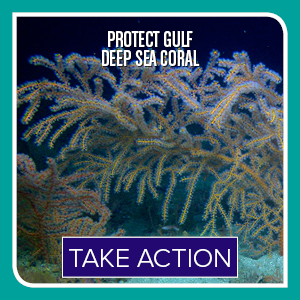 Last summer, more than 60,000 people told the Gulf of Mexico Fisheries Management Council that they supported new protections for deep sea corals. Now the public has another chance to make sure that those measures are enacted.

The National Oceanic and Atmospheric Administration, which oversees the Gulf Council, and the Secretary of Commerce, Wilbur Ross, must sign off on Coral Amendment 9 before it is enacted. The agency is currently accepting public comments until November 25, which can be submitted here.

Some species of corals in the Gulf are thousands of years old. Others build reefs 50 feet tall off the ocean floor. All are extremely slow-growing and can take decades to recover from damage, if they recover at all. Coral ecosystems also contain natural disease fighters, some of which produce treatments for human medical conditions, including cancer.

Scientists, fishermen, and conservationists worked together to set boundaries that would protect corals while allowing access to historic fishing grounds. Most of these areas would restrict damaging fishing gear, such as trawls, traps, anchors, and longlines, which can break or smother corals. Other types of fishing that do not affect the deep ocean floor, such as hook and line, would still be allowed.

These protections would be among the first of their kind to protect deep water corals and are part of a larger effort to protect deep water corals in the Gulf. Scientists have identified 47 areas with significant corals that also need protections and this management structure could eventually apply to them as well. Again, the deadline to submit comments here is November 25.