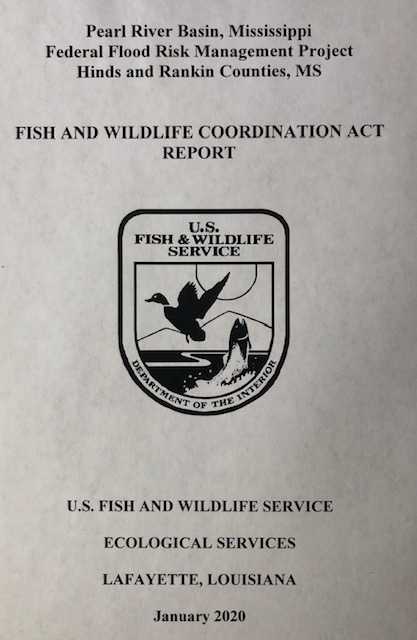 A recently released document from the U.S. Fish and Wildlife Service goes into detail about why a lake dredging alternative for flood control on the Pearl River in Jackson Mississippi is the most environmentally damaging alternative the project sponsor could choose. Yet it is pushing this plan forward for approval by the Army Corps of Engineers.

This project proposed for Pearl River flood protection under Section 211 of the Water Resources Development Act is a public works project to address 4 decades of Jackson flooding problems on the Pearl - a major river flowing through two states. It was not meant by Congress to be a business plan for an amenity project to give Jackson an urban riverfront to develop. Congress has stated, and the Army Corps Engineers has written, as recently as 2019 in the Water Resources Development Act (WRDA) Section 1176 Guidance Document that the Rankin Hinds Pearl River Flood and Drainage Control District must create a project that is technically feasible, economically justified, and environmentally acceptable.

Also, way back in 2007 when Congressional authorization for the Drainage District to pursue this project was granted, levees were the standard for comparison - a lake project could be considered as long as it protected Jackson as well as the National Economic Development plan (NED) which was a levee plan. Its not clear that this requirement remains.

‍
Per the 2019 Guidance document above, the project must be evaluated by the Secretary of the Army for Civil Works on its potential downstream adverse impacts to the Pearl River Basin. So far, we believe it falls short on these review criteria. Mr. R.D. James, the Army Assistant Secretary for Civil Works and his staff will have to provide a justifiable decision at the end of a review period that is expected to last at least 180 days. Review of the project's Final Environmental Impact Statement started February 10th of 2020.

‍
One Sided “Public” Information from the Drainage District

‍
We’ve heard only one side of the story about what can work to solve Jackson’s flooding along the Pearl River. There are many people downstream who are unhappy about the lake option promoted by the Rankin Hinds Drainage District. Congress and the Army Corps of Engineers are hearing from them in 2020. The Drainage District’s battle to control information and process won’t win it needed support from the people downstream who have to live with the results of their project.

‍
The Drainage District has recently heard from the U.S. Fish and Wildlife Service and the State of Louisiana that they both object to a lake plan if it further dams the river. In fact, the January 2020 Fish and Wildlife Coordination Act Report (FWCA) states that the lake option violates all 5 of the criteria used by the US Fish and Wildlife Service to evaluate the ecological soundness of a water development projects. Will Congress and downstream stakeholders ignore this?

‍
The lake option remains the most environmentally damaging alternative in the USFWS reviewer’s eyes. This federal agency and the State of Louisiana have taken it on themselves to propose a combination of two of the Drainage District’s Alternatives, C and B to recommend a dry dam without permanent impoundment in the project area that causes less wetland loss and is less threatening to the Lower Pearl River.

‍
The Drainage District only shared the Fish and Wildlife Coordination Act with the public after Healthy Gulf, Sierra Club and Audubon Mississippi held a press conference on Ash Wednesday and made the point that since October 2019 there has been nothing new on the Drainage District's website since the Biological Opinion (B.O) was posted. It found that disturbing 10 miles of the Pearl River caused no jeopardy to populations of species protected by the Endangered Species Act: mainly the Gulf sturgeon and Ringed sawback turtle. Planned post-construction mitigation activities to river habitat after lake dredging were judged to be adequate for the continued survival of the affected populations of sturgeon and turtles. The Biological Opinion could be seen as supporting the Drainage District’s lake dredging plans and so the District made it public and placed it on their website. The Fish and Wildlife Coordination Act report is not favorable to the lake development and so when the District finally released it, it did so with a multi page cover letter disputing the federal agency's findings.

‍
Hearing only one side

‍
On environmental damage, cost, impact to downstream cities, industry, and public health, we are only hearing one story about one option -lake dredging - and that needs to change.

‍
A Longer Digest of the FWCA Report's Executive Summary

‍
The U.S. Fish and Wildlife Service (USFWS) produced this additional review document about the One Lake project on the Pearl River in late  2019. The Service sent a final Fish and Wildlife Coordination Act Report (FWCA) to state natural resource and wildlife management agencies in Louisiana and Mississippi for their review. The only state agency to send review notes back to the USFWS was the Louisiana Department of Wildlife and Fisheries which agreed in a January 7th 2020 letter with the recommendations of the federal wildlife agency that the dredging and habitat destruction in Alternative C – lake creation- should be avoided in lieu of a modified approach to levee improvement.

‍
The USFWS determined in September of 2018 that digging and dredging 9.5 miles of river bed and banks was the "most environmentally damaging alternative” of all the possibilities that the Rankin Hinds Pearl River Flood and Drainage Control District had to offer in their Draft Environmental Impact Statement. The recent FWCA report reinforces and elaborates on that 2018 determination.

‍
The USFWS wrote in the FWCA report that Alternative C, the lake, impacts 1955 more acres than the Alternative B, the levee plan would. The more acres impacted, the larger the obligation to mitigate for the damage. The USFWS also determined that mitigation offered for Alternative C by the Drainage District did not include mitigation for “riverine” (river dependent) species of fish and mussels, for example, that don’t thrive when flowing waters are impounded and become a slower lacustrine (lake) environment.

The lake plan, Alternative C, also violated five criteria that, by published federal guidance, the USFWS must use in reviewing water development projects.


First, the lake dredging alternative is not an ecologically sound proposal since it would block an additional 18 miles upstream and would convert 9.5 miles of river to a slow moving lake for up to six months of each year in the drier months.

‍
Second, there is a requirement to select the least environmentally damaging reasonable alternative. The Drainage District’s tentatively selected plan or TSP to dredge a lake is the most environmentally damaging plan for both aquatic and terrestrial resources. The Drainage District knew it was the most destructive plan they could propose, and proceeded anyway. However, modifications to the levee plan offered by the USFWS and seconded by the State of Louisiana could improve the project’s destructive profile.

‍
Third, every reasonable effort needs to be made to avoid or minimize the loss or damage to fish and wildlife resources and uses from a water development project. This wasn’t done. The USFWS and the State of Louisiana have both provided suggestions to reduce the damage.

‍
Fourth, all important recommended means and measures need to be adopted and implemented to satisfactorily compensate for unavoidable damage or loss. Due to the lake sponsors receiving special permission from Congress to conduct their own Environmental Impact Statement, the path followed was not the normal way that the USFWS usually enters collaboration during project development. The Service seems to have been brought into the process later than usual and more could have been done earlier to comply with the “means and measures” criteria.

‍
Last, there wasn’t a clear demonstration of need for Alternative C, lake dredging, in lieu of other possible flood control alternatives that may be less damaging. There is a need for flood control in Jackson, but the Drainage District has not been persuasive to the U.S. Fish and Wildlife Service that the form of flood control should be a lake dredging project in the Jackson section of the Pearl River.

‍
The last criterion, dealing with purpose and need, should ring a bell with those who made comments two years ago on the project’s Draft EIS and Feasibility Study. In the very first pages of the Drainage District’s Draft EIS in 2018, its purpose and need statements were unconvincing and it is interesting to see the U.S. Fish and Wildlife Service state the same thing in 2020.  The USFWS statements criticize the “need” for a lake project when any other alternative is less damaging and would require less expensive and complex long term mitigation.

‍
The Drainage District only reluctantly posted this most recent Fish and Wildlife Coordination report on its website, and it is no surprise. The last thing they shared with the public was the Biological Opinion in October, which the District saw as favorable to their case because it concluded that the endangered species in the river wouldn’t be place in jeopardy if a lake was built. Ten miles of lost habitat for turtles or sturgeon were not enough to jeopardize either species. We see now that this question is a different one from whether the lake dredging idea is ecologically sound overall, or is the least damaging alternative. Taking the broad view, the lake project still receives bad marks when it is evaluated objectively.