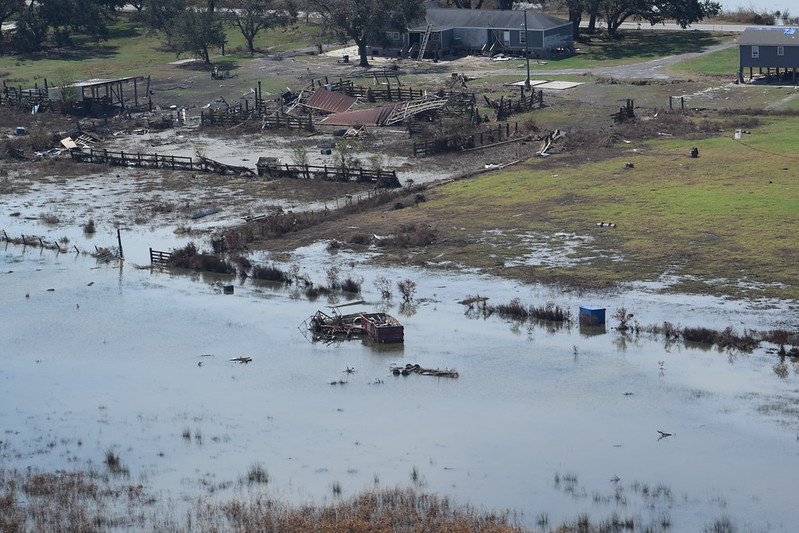 Since we’re currently in the height of hurricane season, with Laura and Sally recently impacting large sections of the Gulf, I thought this would be a good time to share some information on how oysters are impacted by hurricanes, and how they can help protect us from hurricane damage.

Since we’re currently in the height of hurricane season, with Laura and Sally recently impacting large sections of the Gulf, I thought this would be a good time to share some information on how oysters are impacted by hurricanes, and how they can help protect us from hurricane damage.

First, let’s look at how hurricanes impact and often destroy oyster habitats. After large hurricanes, coastal areas are often left with high nutrient levels because of soil disruption. High nutrient loading often results in periods of low oxygen levels which in turn kills marine life at a higher rate than usual. Even without significant loss of habitat, marine life, including oysters, can take months to return to pre-hurricane numbers. Generally, storm surge and heavy rainfall cause physical disturbances in oyster reefs, sedimentation, and extreme salinity changes. The large influxes of polluted water associated with heavy rains from tropical weather systems normally cause state health departments to close affected oyster harvest areas until water testing shows reductions in the concentrations of water-borne pathogens, like bacteria. So oyster supplies are almost always disrupted by hurricanes and tropical storms, even if there is no long term damage to reefs.

When Hurricane Elena hit in 1985, commercial and private harvesting of oysters in Apalachicola Bay were suspended for a year due to loss of reef and oyster populations. In 1994, Hurricane Alberto did not cause a large amount of physical damage to the Gulf coast. However, because of the large amount of upstream precipitation, the salinity levels fell so much that oysters experienced an 80-90% mortality rate. More recently, Hurricanes Katrina and Rita caused a 55-70% mortality to oysters in the public ground.

Now let’s talk about why we should be investing more heavily in oyster populations: they can actually help protect the coast from damage due to hurricanes and large tropical storms. Unlike regular seawalls, oyster reefs can act as living shorelines. Instead of blocking the water, living shorelines filter and clean water that comes in with the tides. Seawalls are expensive and not built to withstand severe storms. They are extremely vulnerable to eroding, which eventually causes them to crack and fall over. Additionally, in areas of the Gulf coast where land subsidence rates are high, like southeast Louisiana, seawalls and levees also sink and their crests need to be raised periodically with fill. This maintenance is expensive.

Living shorelines, on the other hand, are far less expensive costing an average of $361 per linear foot. Living shorelines, like oyster shells, will turn into reefs that become home to tons of marine creatures. In order to best protect the Gulf from storms and sea level rise, we should be investing in multiple lines of coastal defense - including oysters reefs, marsh restoration, levees and even flood proofing our homes. This would not only be a safer solution for the residents of the Gulf (humans, animals, and plants), but would also encourage growth of depleted oyster populations.