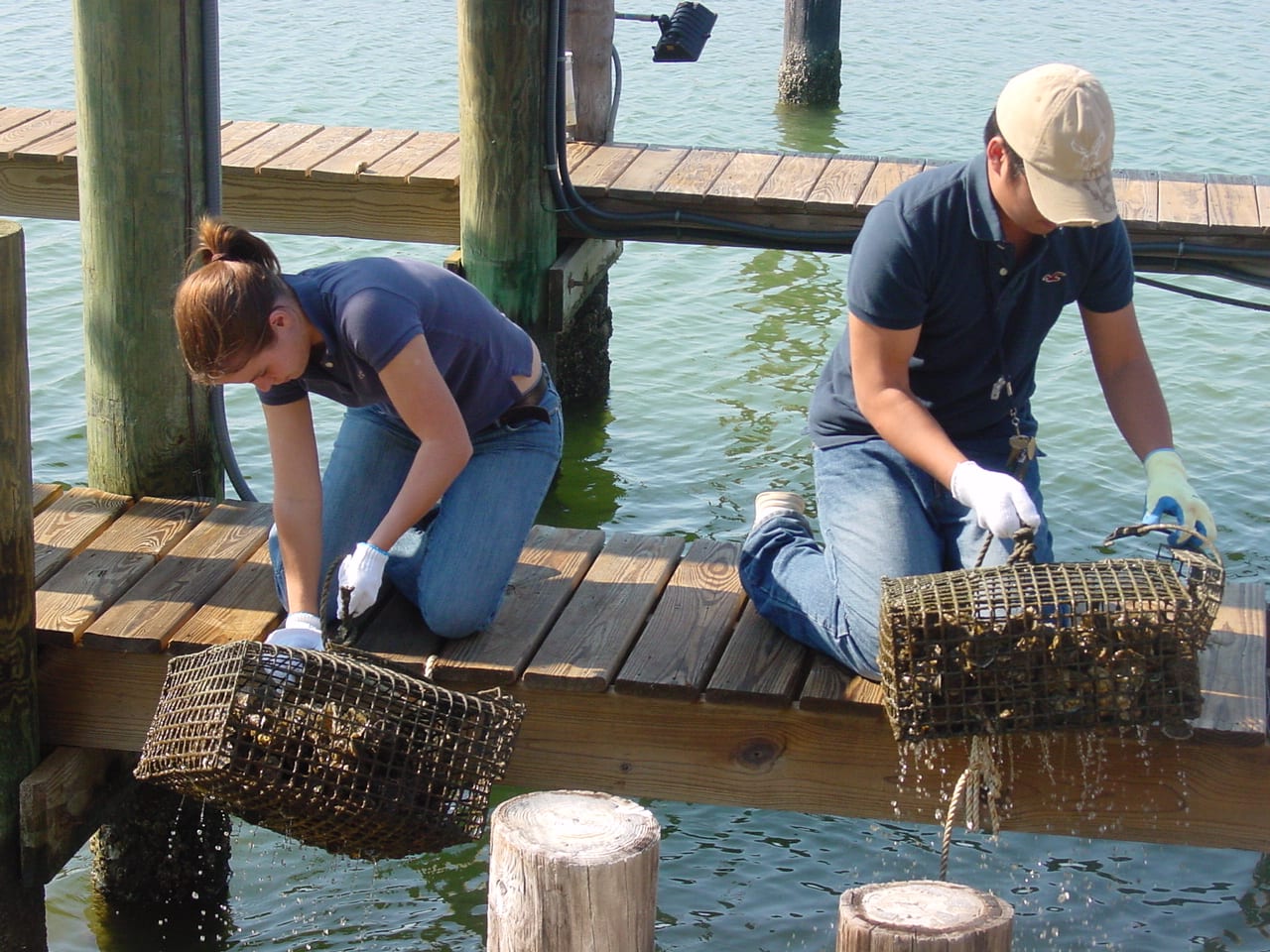 The Oyster Gardening program engages volunteers who hang oyster cages off of their docks, manage and tend them as they grow from spat-on-shell to adult stage oysters that can then be moved to public spawning reefs. Photo Credit: Alabama Cooperative Extension Service.

NRDA Restoration Plan 2 for Mississippi has been published for comment by the Mississippi Trustee Implementation Group and MDEQ. Three quarters of the spending in Plan 2 is focused on restoring oysters: placing cultch material on water bottoms to create reefs, and four years of new funding for the Mississippi oyster gardening volunteer program, managed by MS-AL Sea Grant Program.

‍
Building-up the stocks of spawning oysters in the Mississippi Sound and back bays is one important component of NRDA Plan 2. The governors of the five Gulf States are the NRDA trustees and in Mississippi the Department of Environmental Quality manages project submissions, selections and payments to contractors for restoration.
The NRDA Trustee Implementation Group (TIG) has approved Mississippi’s Plan II which splits proposed spending between managing terrestrial habitat on coastal preserve lands (removal of invasive species, controlled burning, maritime forest and marsh management), and improving marine habitat and marine resources. The latter part of the NRDA money will create more acres of oyster spawning reefs in the Mississippi Sound and bays, and continue the oyster gardening program started by AL-MS Sea Grant with other sources of post-BP spill restoration money.

‍
The largest portion of the spending on oysters, $10 million dollars, is allocated for the creation of new reefs across coastal Mississippi, from near the mouth of the Pearl River on the Louisiana side to the MS/AL border. The placement of hard cultch materials like rock, shell, crushed concrete and limestone will create hard bottoms where larval oysters can attach and grow. Cultch is moved with tugs and barges that carry a bucket loader/dragline to scoop the material off of the barge deck into the water to create the new reef areas on the bottom. Using this method, ten million dollars will create up to 400 acres of new oyster reefs all across the Mississippi Sound from Heron Bay to Grand Bay.

‍
Colonization of the new reefs with oyster larvae from wild spawning will be supplemented with oysters grown in the ongoing oyster gardening program for coastal Mississippi. The NRDA Plan 2 provides $500,000 over 5 years to continue the oyster gardening effort started by the AL-MS Sea Grant Program. Waterfront property owners volunteer to become oyster gardeners – to maintain wire baskets with hatchery raised oysters suspended from their docks - and take care of them until they grow large enough to be moved and placed on existing public reefs. These oyster gardeners are participating in “extensive” aquaculture: nature provides the tides and the food (plankton and detritus) for the oysters’ filter feeding and growth. The people pledge to monitor and clean the baskets and oysters so fouling and silt don’t hamper growth, and regularly open the cages to remove any predatory drill snails or stone crabs.

‍
With Plan 2, it is good to see the state continuing to do what it can to bolster oyster production. In 2018 and 2019, Mississippi’s oyster resources took a third body-blow, after Katrina and the BP oil spill, when the Bonnet Carre Spillway in Louisiana released so much Mississippi River flood water on oyster reefs for such a long duration that almost all living oysters from the Pearl River east to Biloxi Bay were killed. The nutrient-laden fresh water decreased salinities to near zero, and sparked harmful algae blooms that robbed coastal waters of dissolved oxygen and fouled reefs.

‍
NRDA Plan 2 directs 75% of its total available funding to creating more hard bottoms for spawning reefs where mature oysters can, over time, produce billions of larval, free swimming “veliger” stage oysters over many years. With luck, these planktonic oysters will drift over new cultch piles, drop to the bottom, attach to hard substrate, form shells as “spat”- little gray dots,  and grow into spawning adult oysters so the state can continue to replace what has been lost. Oyster gardening will receive 5% of the total spent on oysters in NRDA Plan 2, but will continue to engage more Mississippi citizen volunteers in their state’s oyster recovery.