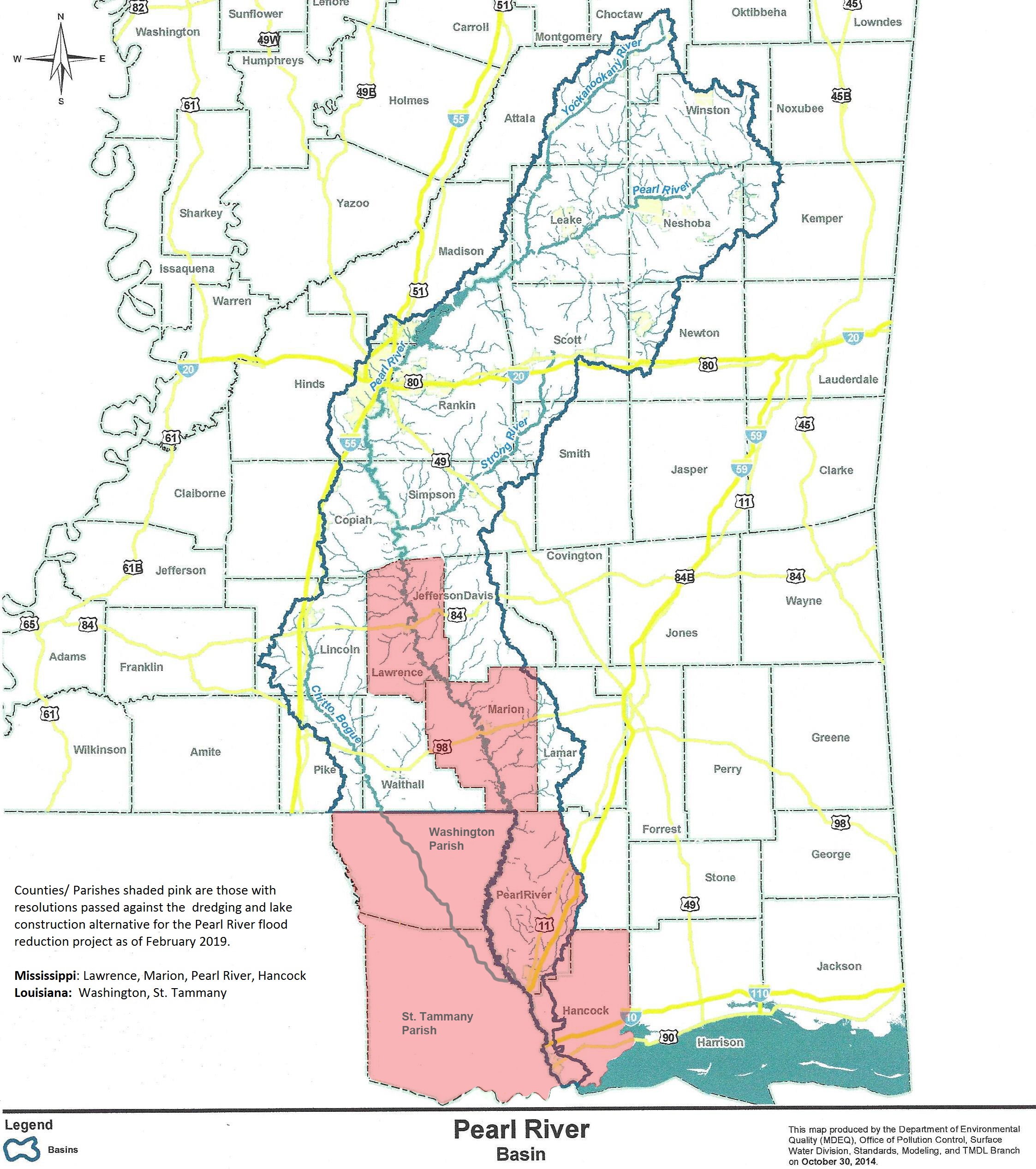 All Counties and Parishes opposing the One Lake Project proposed for the Pearl River Jackson.

Economic justification for the One Lake project will be tough to examine if Corps agency technical reviews and independent peer reviews of the project are not released when the Final Environmental Impact Statement is published later this year. The Rankin Hinds Drainage District has jealously guarded access to these reviews so far.

In early February, I joined Mayor Martha Watts of Monticello, Ms.,  Louisiana State Representative Malinda White of Bogalusa,  and paper industry executives in Washington D.C. to speak to staff of R.D. James, the Army Assistant Secretary for Civil Works and to Congress members about our concerns surrounding the “One Lake” project proposed for the Pearl River. This plan would dredge the river’s bed and banks in Jackson/Flowood to create a ten mile long, 1900-acre urban lake. The Final Environmental Impact Statement (Final EIS) for the project was submitted for review to Secretary James’ office February 10th.


In recent correspondence from Secretary James’ office we’ve learned that initial analysis of the project will proceed at least through April – this estimate was made before COVID-19 struck. Secretary James will know by then if he has enough data to make a decision to move the One Lake plan forward - he could ask the project sponsors, the Rankin Hinds Pearl River Flood and Drainage Control District, for more information. The Corps will ultimately report to Congress whether the lake alternative will decrease Pearl River flooding, and if its benefit-to-cost ratio meets current standards.

‍
We know the decision-makers in Washington D.C. are going to scrutinize the spending. This shines new light on the Drainage District’s choice to add $310 million to the levee plan to install pumps it says are necessary, and its failure to include economic costs for bridge replacement ($100 million). There are also other cost issues not raised so far, like added water treatment that paper mills and downstream towns may face during seasonal low-flow months.  After damming the Pearl and clearing the banks of trees, a wide lake surface causes water to gain more of the sun’s heat than the narrow, more shaded profile of the river. Water temperature modification could cost at least $10 million just at the Georgia-Pacific Monticello paper mill.

‍
The Drainage District, in its 2018 Draft EIS, presented three alternatives, with costs: floodplain buyouts and relocations ($2 billion), levee improvements ($729 million) and the lake dredging plan, ($345 million). The economic analysis of these three will identify the National Economic Development alternative (NED) – the plan with the most favorable benefit-to-cost ratio. The Drainage District, in 2018, called the lake the “NED plan”.

‍
Padding the project budget with pumps and leaving off local costs ($100 million for bridges) and costs in downstream counties are factors that make the lake appear attractive compared with levees or floodplain buyouts. The Mississippi Development Authority (MDA) provided $1 million to the Drainage District for its EIS preparation in 2013, so Mississippi taxpayers have helped fund an economics analysis that turns over every rock to find benefits but doesn’t look very hard for costs. Does this sound familiar? (Beef Plant, Kemper Power Plant)

‍
A looming problem is that mayors, state representatives, industry managers and the public won’t have the numbers needed to look behind the Drainage District’s claims when the study is published in the second half of 2020. Two outside expert reviews of the project exist now: one by the Army Corps and one by Battelle Institute, a global research and development firm. The Drainage District and Vicksburg Corps District have both declined to release these expert reviews after FOIA requests.
Economics questions about this project have been openly raised by U.S. Congressman Bennie Thompson of Mississippi. The Drainage District has Senator Wicker’s support for the lake plan, while Senator Hyde-Smith has been silent about it. Congressman Steve Scalise and Senator Bill Cassidy of Louisiana worked to require the Corps to evaluate the economic justification for the project and to examine adverse environmental impacts to the lower Pearl River.

‍
Every downstream County and Parish below Monticello, Ms. is on record against the lake plan.  Including towns and the Louisiana Legislature, there are thirteen such resolutions. Congressman Palazzo’s office (Ms.) is monitoring the Pearl project with an eye to coastal effects, and Congressman Ralph Abraham (La.), a physician, is also concerned about Jackson’s substandard sewage treatment and downstream human health consequences. The 2018 Draft EIS NED economics analysis amplifies benefits, downplays costs and clearly favors the lake project. Congress and the Corps need to be reminded of this sooner rather than later. When the Corps and the Rankin Hinds Drainage District publish the final One Lake EIS report for public comments later this year, there will be one short month to raise issues about economics, water quantity, wetlands, toxic landfills, wildlife habitat and much more.