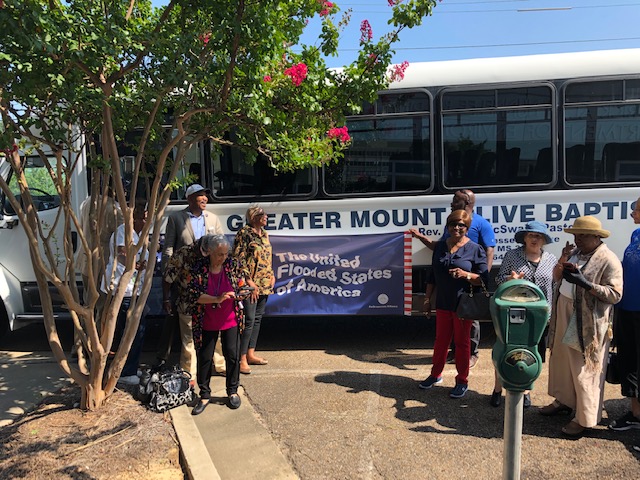 Citizens from North Gulfport oppose wetland filling that would allow the State Port to build a rail/truck transfer facility next to their neighborhoods. Environmental Justice issues are contained in the appeal. Residents who live adjacent to the project site are concerned that soil and water pollution contained there will be mobilized with development and affect their health, property and quality of life. A 70 year old brownfield site - a closed fertilizer plant - has left soil and groundwater tainted by arsenic, lead and carcinogens that could find their way to the surface if the site is developed. The evidentiary hearing on the Mississippi State Port Authority's Clean Water Act State water quality certification began this week at the MDEQ Commission Room in Jackson, but is continued until May.

This week, at an evidentiary hearing, residents from North Gulfport appealed the Mississippi Department of Environmental Quality’s 2019 approval of a Water Quality Certification for a wetland fill project in North Gulfport. This Certification clears the way for the State Port of Mississippi to fill wetlands for a truck/rail transfer facility. Healthy Gulf supports the Gulfport residents opposing this project. We attended the earlier 2019 Permit Board meeting that granted the certification.  I put on my mask and attended their follow-up evidentiary hearing this week as well, which was also broadcast on Zoom. Some witnesses testified in the video conference format.

‍
Attorney Desiree Hensley, a University of Mississippi Law School clinical practice professor, represented residents through her clients; the lead appellant and local non-profit group Education, Economic, Environmental Climate and Health Organization (EEECHO), Anointed Temple AOH Church, and North Gulfport Land Trust. She is working pro bono and her clinic students viewed the appeal by video conference. The residents living near the proposed project object to the Port developing the site because it has been vacant for such a long time, and for good reason. It is contaminated with carcinogens, heavy metals and other toxins due to a fertilizer manufacturer that closed seventy years ago. The residents are worried that the construction activities and new storm-water systems installed by the Port will mobilize these contaminants and cause human exposure. The destruction of 3.1 acres of wetlands is of concern because they form a buffer zone between the badly polluted northern section of the property and the less polluted southern end where the Port’s project will be built adjacent to neighborhoods. The northern section has a clay cap covering lead and arsenic contamination in the soil and groundwater. The MDEQ monitors 14 water wells on the site that allow the agency to track how a plume of polluted groundwater under the cap is migrating over time. MDEQ finished the site’s remediation in 2009 but requires permanent monitoring.

‍
The Port and MDEQ dispute the claims made by the community, assuring them that the site is stable enough to develop and that construction and design of the North Port facility will provide adequate assurance of safety for those living nearby. The Port is represented by Balch & Bingham, a law firm specializing in defending the permits of Gulf Coast industries.

‍
Attorney Hensley cross-examined Ms. Florance Bass and Thomas Wallace, staff engineers from MDEQ. She used records from MDEQ’s files to develop her issues and questions for appeal. Anyone using the agency’s permit files to prepare an appeal must examine volumes of jumbled documents left in the wake of years of correspondence, permit texts and technical reports. Figuring out the narrative told by such files requires the services of an expert. Among other problems with the permit, Ms. Hensley pointed out that the agency’s own maps and documents told conflicting stories about how far the underground contamination had migrated in the decade or more since MDEQ required the last property owner, Hancock Bank, to install the clay cap and monitoring wells.

‍
After listening to hours of back and forth volleys between the attorneys and the witnesses, I wrote in the margin of my notes “The state against its people.” This is most people’s impression after observing the MDEQ permit process a time or two. To be clear about the nature of the uneven “playing field”, this is the State Port Authority, an “enterprise agency” that answers to the Governor and the Mississippi Development Authority, being supported by MDEQ - another executive agency. This project would allow the port to secure military contracts for the loading, unloading and storage of military equipment moving in overseas shipment – in both peacetime and emergency situations.

‍
The Port, since Hurricane Katrina, has been the recipient of almost half a billion dollars in federal Housing and Urban Development (HUD) block grants to the state, yet has produced fewer port and transportation jobs than projected when the grants were awarded back during the Haley Barbour administration. The State Port has been through several directors since 2005 and continues to search for ways to grow, attract clients and justify the vast sums that have been lavished on it. The North Port project to build the rail/truck transfer yard would be only a part of the Port’s overall activity. The Port has put three successive governors in the uncomfortable, somewhat embarrassing situation of the State not quite living up to promises it made to HUD. In the midst of all this are the residents who don’t want the polluted soil and water problems from this decades-old brownfield site threatening their health, property values and quality of life.

‍
The residents who engaged Ms. Hensley to represent their interests are trying to avoid being steamrolled by the Port and MDEQ, both of which answer to Governor Tate Reeves. This hearing is happening within the context of a stark power imbalance. Environmental Justice is the special term applied when minority communities are target areas for development that pollutes the air land or water or must live with the legacy of this pollution. It certainly applies to this neighborhood next to the old Gulfport fertilizer plant site. The residents appealing the Port’s 401 permit are African American and environmental justice is a factor mixed into the granting of this permit.  Over at least 50 years, these neighborhoods have been impacted as development in Gulfport pushed north towards I-10.

‍
The residents already live with legacy industrial pollution, noise pollution, air pollution and flooding. These neighborhoods now are wedged among a regional airport/Air National Guard Base, Naval Construction Battalion Base (Seabees), and nearby shipyards along Bernard Bayou. They are flanked on the east by a rail line and Highway 49, one of the busiest commercial corridors between New Orleans and Mobile. On the north and west is Turkey Creek, which is on the state’s impaired waterway list due to the presence of sewage bacteria. Turkey Creek flows into Bernard Bayou and Biloxi Bay and takes on tidal flooding with each Gulf storm surge – swamping these neighborhoods from the north. The residents don’t need any more drainage, pollution or flooding complications here and they don’t want to lose any more of their wetlands.

‍
Whether the State of Mississippi adds to these problems or not is something that will continue to play out in May when this hearing is completed, followed by a final vote on the matter by Permit Board members. The Board routinely votes to support agency recommendations to grant permits and/or deny appeals. To do otherwise would be a vote of no confidence in MDEQ staff on matters outside of the expertise of most of the Board members. A majority of the Permit Board is composed of employees of five state agencies (who receive no training in MDEQ permitting procedures) voting as proxies for their executive directors, who are not required to personally attend Board meetings. The state agency directors with the statutory authority to hear permit issues and deny, table, or modify them to be less objectionable are never seated in the room to personally hear these appeals. This is a major flaw of the MDEQ permit process that the Mississippi Legislature could easily fix, and places an even sharper focus on Environmental Justice issues in an appeal like this one. The MDEQ Commission on Environmental Quality, by comparison, cannot operate if its appointed members don’t attend meetings in person. It’s the agency’s board of directors and like the Permit Board makes agency decisions that affect ordinary people’s health and property, but its Commissioners must show up, hear live discussions and feel the political heat of its decisions.

If the May hearing’s vote goes against the North Gulfport residents, it’s still possible to take the matter to Chancery Court on yet another appeal. If that becomes necessary, the record of testimony that attorney Hensley is creating in the ongoing MDEQ hearing forms the basis of a subsequent appeal.