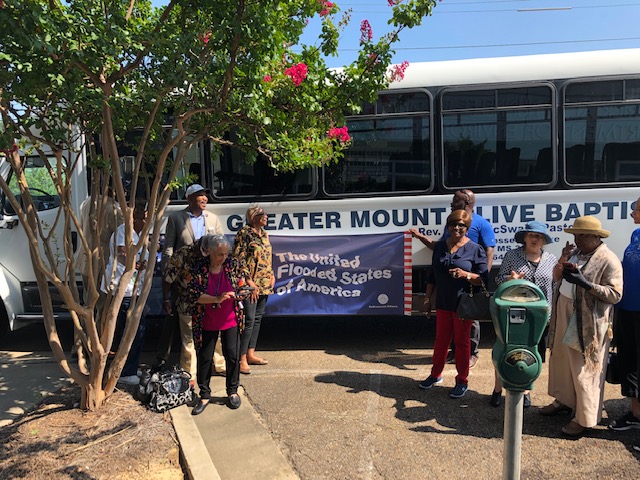 MDEQ should protect people, and not wedge projects into communities that already have plenty of health and environmental problems to deal with. The August 13th Permit Board meeting was another example of why the MDEQ Environmental Permit Process needs to be examined by the Legislature soon, and made more responsive to the citizens whose health and property are meant to be protected by the agency.

Today there was another monthly Mississippi Department of Environmental Quality (MDEQ) Permit Board meeting, and another group of Mississippi citizens traveled to Jackson to feel the full power of the state clearing the path for another industrial development in their community. This time a group of African-American residents of the North Gulfport neighborhoods of Forest Heights, Villa Del Ray and Turkey Creek, along Hwy 49, came to Jackson on a church bus to object to the Mississippi State Port Authority’s (The Port's) application for a  Clean Water Act (CWA) 401 Water Quality Certification permit and for a Construction Stormwater Permit.

‍
The Port wants to develop a portion of a 140 acre property that was once the home of a fertilizer plant. Groundwater under the property is contaminated with arsenic and lead, the surface has been remediated under MDEQ supervision with a clay cap to stabilize contaminated soils. The Port wants to fill 3.15 acres of wetlands in order to develop 10-15 acres on the southeast corner of the land, and install a rail spur from the Kansas City Southern line. All this is in order to service the Department of Defense and provide an inland rail yard and material handling area for military shipments that need to be unpacked from ships and travel by rail to other parts of the U.S. The Port was noncommittal on future plans beyond the military use of this portion of property as a strategic defense shipping facility. North Gulfport residents clearly believe that the Port has future plans for more tenants on the rest of the site and that truck and rail traffic in the middle of their community will grow and pose more traffic congestion and health problems for residents. North Gulfport folks also firmly believe that disturbing the soils on the 140 acres will make pollutants travel off-site in dust and in stormwater flows that residents and their children can come into contact with.

‍
So, the twenty, mostly retired  men and women who rode the Greater Mount Olive Church bus from Gulfport to Jackson were facing the power of the MDEQ, the State Port Authority, with the full weight of the Governor’s office behind it, and by proxy,  the U.S. Department of Defense. It was a daunting task, but their testimonies to the Permit Board members represented their neighborhood concerns well. Glen Cobb, Ruth Story, John Johnson, Lattie Grubbs and State Senator Deborah Dawkins all spoke and laid out the case that alternative sites exist in Gulfport that could serve the industrial and defense needs of the Port better than this site, and that the CWA 401 State Water Quality Certification application by the Port and the analysis by MDEQ did not give adequate weight to these alternatives. An alternatives analysis is always part of a wetland permit and so the opponents did their homework. In addition, comments were made to the Permit Board member representing the Mississippi Health Department that the contamination present on the site can still affect the neighborhoods adjacent to the 140 acres, and that more wetland filling in their community (that already floods with normal rains) is unjustified and unjust. This permit requires a much stronger Environmental Justice (EJ) analysis than MDEQ was prepared to give it. Two sides of the land in question are bounded by the heart of the historically African-American North Gulfport communities, complete with homes, schools, and churches.

‍
MDEQ directs the 401 Water Quality Certification program which is the state’s part of the Clean Water Act wetland fill permit process that also requires a federal 404 wetland dredge and fill permit from the Army Corps of Engineers. MDEQ staff presented the Water Quality Certification to the Board for its vote and recommended that they vote for it. A 401 Certification provides that the project won’t be a threat to the water quality of streams or wetlands affected by activity on the site.  For this port project, there was a combined, joint 401/404 notice   published by the Mississippi Department of Marine Resources because this piece of property is also in the Coastal Zone and subject to the MDMR’s jurisdiction. The staff person presenting today did what all good MDEQ employees always do at Permit Board meetings: she circled the wagons and defended the agency’s analysis and position. When permit board members began asking MDEQ staff if the permit could be conditioned on making the Port buy its wetland mitigation lands before any permit was issued, she became visibly agitated. It was clear from body language and the tone of responses that MDEQ staff felt annoyed or maybe disrespected by the Board member’s questions and requests. It looked pretty clear that winning on the permit that her department wrote, and giving the Corps the 401 permit it needed to write a full 404 wetland fill permit were more important to MDEQ than responding to the needs of Gulfport's people.

Never mind how this project could damage the neighborhoods of North Gulfport, the street flooding conditions, soil contamination, air quality, or the health of the people in this community.  Winning, for the MDEQ permit writers, means conceding little or nothing to the people who oppose these permits, or who ask for reasonable modifications to make them less intrusive to neighboring communities. The MDEQ hosts the Permit Board, but when the board members representing other executive agencies ask too many questions in a public forum like today’s meeting, MDEQ employees see these inquiries as “votes of no confidence” in their work and inevitably begin playing agency defense.

‍
This is mostly how it goes at the Permit Board at MDEQ. People attend public meetings, write thoughtful comments, and travel for hours to Jackson to speak to this Board to defend the quiet enjoyment of their property and health of their communities. And the MDEQ staff fight them as if they threaten the agency and its mission. The missions of the national environmental laws like the Clean Water Act, Clean Air Act, and federal Hazardous Waste laws are to protect human health and the environment, not to protect staff egos, or the time and effort that engineers at state agencies invest in writing permits for poorly conceived projects. MDEQ should protect people, and not wedge projects into communities that already have plenty of health and environmental problems to deal with. MDEQ needs to review its mission. Today was a particularly glaring example of what is wrong with the permit process. Earlier in the summer, the Lucedale Enviva Partners wood pellet mill’s air pollution permit was another.


It was (and is always) tough to see people come to Jackson and pour their hearts out to a bunch of mid-level state agency employees and see very little come of their efforts. (The Executive Directors of 5 of the agencies, constituting a majority on the Permit Board, never attend these meetings themselves but send their subordinates to vote as proxies)  The final vote at the meeting granted the Port its 401 Water Quality Certification permit with one slight modification, proposed by Board members from the Mississippi’s Departments of Wildlife Fisheries and & Parks, and Marine Resources: the permit will contain a condition that the damage to the 3.15 acres of filled wetlands on the site be mitigated with lands purchased inside the drainage basin (watershed) of Turkey Creek. This was a commonsense, practical request to help keep local floodwater storage from being lost, and it was clear that even this small concession on mitigation threatened the MDEQ staff - it was allowed begrudgingly.

‍
The choice to appeal today’s vote is now before the citizens of North Gulfport. They have 30 days in which to inform MDEQ of their decision to appeal the outcome. An appeal means returning back to MDEQ in Jackson with an attorney, and taking part in an evidentiary hearing, again in front of the Permit Board. The MDEQ legal staff defends the agency’s permit and uses the rules of evidence to limit what goes into the record for further appeal. A hearing officer from the Attorney General’s office acts as judge to referee in matters of evidence between the appealing attorney and the MDEQ attorney in this hearing. And at its conclusion, the Permit Board votes again - usually the same way as before - to grant the permit.  After this, the side losing at the hearing and appealing the permit is free to take the appeal out of the administrative agency system to state Chancery Court where they won’t be up against the same stacked odds. An elected Chancery Court judge hears the matter and decides if MDEQ’s decision is justified, based on its regulations, applicable statute law - plus a Chancellor is free to make an equitable determination. The Chancellor mostly looks for issues that may have been decided wrongly in granting the permit. Because of the time, expense and complexity of such an appeal, not many permits get appealed all the way to Chancery Court.  Often, the side losing at the Permit Board drives home from Jackson with heavy hearts, figuring out how to live next to their new, unwanted, intrusive industrial neighbors – in this case the Port’s rail transfer yard. Perhaps this 401 Water Quality Certification will go far enough in the appeal process to receive some well-deserved justice.