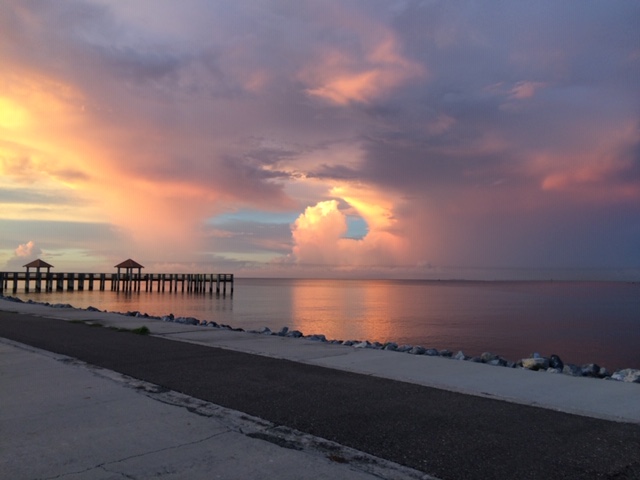 Gulfport Harbor fishing pier at sunrise. NRDA Plan III is being formulated to include spending on new categories for 2020 including those that enhance recreation opportunities, like fishing piers, boat launches and other public access improvements.

This is a report on some of the restoration subjects covered at MDEQ's 2020 Coastal Restoration Summit which was held in a virtual "Zoom conference" format on Nov. 10th.

The Mississippi Department of Environmental Quality hosted a virtual Restoration Summit on November 10th via video conference. “Progress” was the theme of the Summit. The settlement with BP happened in 2016, so we are five years into the process of planning, construction and monitoring the coastal, habitat and economic restoration projects that will continue until 2031. It will take the next 11 years to spend the restoration money in the various pots or buckets: RESTORE Act, NRDA, and NFWF. The RESTORE Act money’s purpose is split among economic damage compensation, infrastructure spending and natural resource restoration but the others, NRDA and NFWF, more closely follow ecological and natural resource restoration.

‍
MDEQ said that the agency sees itself as 30% along the pathway to the end of the spending phase in 2031 and cited 91 active projects overseen by the state agency’s Office of Restoration over the last 5 years, obligating $597 million of the $1.3 billion that the state will eventually spend.

‍
As it did in the 2019 Summit, MDEQ used an instant internet poll to query the meeting attendees several times about attendee’s demographics, their opinions about restoration, and on suggested points of emphasis for future project themes. Healthy Gulf wrote MDEQ a letter in summer 2019 about last year’s Summit to suggest that MDEQ’s instant SLIDO ™ internet polls were gathering data for the agency but didn’t provide much free opportunity for open public input. Last year’s roundtable discussions at the end of the in-person summit meeting were poorly attended –most meeting attendees headed for the doors after the last presentation and did not join a DEQ roundtable. Our letter was joined by Gulf Islands Conservancy, North Gulfport Land Trust, Coalition for Vietnamese-American Fisher Folks and Families, and Operation Homecare. We asked for improved public engagement and more educational seminars at the Restoration Summit for people who still want to learn how best to submit projects and shepherd them through vetting screens and the political landscape so that they stand some chance of happening. Our letter suggested case studies presented by people or groups who’ve been successful in getting projects into the Restoration Portal and seeing them through to acceptance and funding. Restoration in Mississippi seems to be a dance, and to participate, we need to periodically review the choreography.

‍
This year’s format, affected by the COVID-19 precautions, couldn’t offer the same public engagement that the in-person Summits have over the past years, but with 11 years left to go, there are many more projects that can be submitted to MDEQ for consideration. After five years, maybe it is time to slow down and “let the wake catch up to the boat” a  little bit, and for the state to hold some educational workshops that can help individuals and groups submit projects that stand a chance of being funded. Attendance queries showed that 40% of people on the video conference were first-time Summit attendees, which was surprising – perhaps not having to travel to the Biloxi Coliseum this year made it easier to attend. Overwhelmingly, attendees responded that they’d like to see a live, in-person conference held with a video conference option. Perhaps this will open public engagement in future years if MDEQ will host this kind of dual-format meeting. Only 6% of meeting attendees were individuals not connected to government, NGOs or consulting. As in past years, private citizens have a tougher time attending this conference than those affiliated with agencies, non-profit groups or vendors.

‍
The water quality improvement efforts have added 65 new monitoring stations to the existing network of 119 sampling sites along coastal beaches and streams that empty into coastal bays.  Source tracking also has been an emphasis: using water testing to identify hotspots where sewage is leaking out of collection pipes onto the ground or into surface drainage. Using this tracking, 11 sewage repair projects have been implemented in coastal cities with another 9 being vetted. This is hard, and unglamorous work that is also labor and resource intensive and requires big machines – digging up and replacing pipes and lift-station pumps. If the restoration spending helps municipalities keep up with this constantly moving infrastructure repair target, the coast’s water quality benefits. Also, restoration funding will facilitate continued conversions of home septic systems to municipal sewer collection systems.

‍
Marine resources that can be supported by restoration funds include oysters, fisheries, birds, turtles and marine mammals. The Tails and Scales reporting system that is operated by MDMR to monitor the state’s recreational catch of red snapper has been a successful program. Much education has accompanied this program which supp0rts user-friendly software so fishers can use their phones or computers to report red snapper harvest results. If only sewage spills and Back Bay water quality had the status of the red snapper and could be enthusiastically and competently monitored and reported by citizens with cell phones…

‍
Bringing oyster production back from a multitude of stresses remains a long term goal in Mississippi. The strategy for supporting and restoring oysters and the secondary productivity that their reefs provide includes multiple focus areas: hatcheries, remote setting of spat, spreading of cultch to create hard bottoms, off-bottom cage aquaculture, water quality, shell recycling and scientific monitoring of the success of all the above. In NRDA plan II, there are two components that focus on oysters:  $10 million for a network of spawning reefs that are meant to be left mostly undisturbed and provide larval oysters that can drift and settle new areas, and $500 thousand for continued support of oyster gardening – growing oysters in cages moored on private docks and piers across the coasts bays and bayous. MDEQ says that the spreading of cultch for the spawning reefs will proceed deliberately and slowly using the results of hydrodynamic modeling and based on the success in oyster recruitment on some high-relief experimental reefs (tall cultch piles) in the western Mississippi Sound. After the Bonnet Carre Spillway’s extended 2018-2019 fresh water inundation killed most of the oyster reefs off Hancock and Harrison Counties, and since then, MDEQ seems reluctant to aggressively build these spawning reefs. They are moving forward cautiously.

‍
Plan III for NRDA is in its first stages and will change focus and concentrate on sea turtles, marine mammals, birds, habitat improvement on public lands and enhancing recreational opportunities (public access, piers, boat ramps etc.) One new project for NFWF was announced. Its Gulf Environmental Benefit Fund will spend $4.5 million to enhance habitat for migratory birds in the Counties of the Mississippi Delta on Federal Refuges and state Wildlife Management Areas. A very few restoration projects are chosen for areas so distant from the coast, but they are highly ranked according to the species they serve. Migratory birds passing through the Delta will also use coastal habitats as they migrate across the Gulf, so there is a big picture connection to coastal restoration funding.

‍
In general, the Summit hosted by MDEQ was very informative and well presented. More how-to workshops next time, even in a remote meeting format, could continue to engage more people on coastal restoration issues. There is more than a decade of project planning and spending ahead, so continued public engagement on how and where to spend the restoration funds is essential.