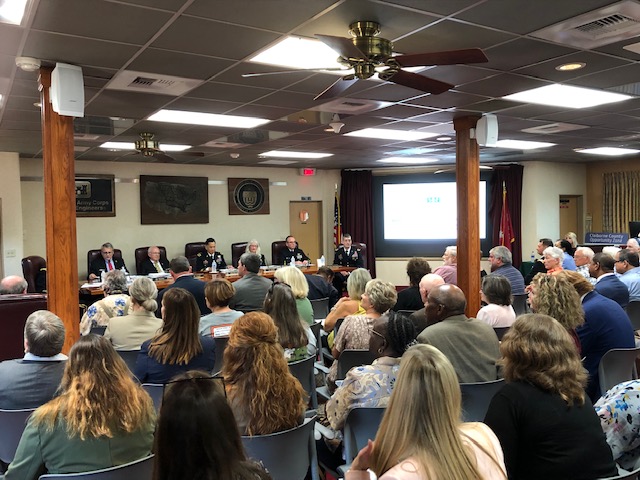 Commission Meeting Room on board the river towboat M/V Mississippi

Damage to Mississippi and Louisiana fisheries from the 2019 River Flooding, Nutrient levels in the River, Climate Change, the Yazoo Backwater Pumps, and the operation of the Morganza and Bonnet Carre Floodways were some of the topics the Mississippi River Commissioners heard when they docked their towboat in Vicksburg and invited the public to go aboard and address them.


The 2018-2019 Mississippi River flood was squarely on the minds of the Mississippi state officials addressing the Commission members. Mississippi Secretary of State Delbert Hosemann was the first to speak. He and General Joe Spraggins, the Mississippi Department of Marine Resources Director, gave a slide show on the effects to coastal fisheries and tourism of the opening of the Bonnet Carre Spillway. It sent nutrient laden Mississippi River water into Lake Pontchartrain and on to the Mississippi Sound for a total of 123 days this year, a new record. Hosemann summarized the devastation to commercial fishing in Mississippi: oyster beds with 95% mortality, crab and finfish harvest down by 1/3 to 1/2. He covered the losses to recreational fishing and described what the toxic algae blooms and closure of all Mississippi Coast beaches have done to tourism, hotel and restaurant businesses in the three coastal counties. Damages are still being tallied for the remainder of 2019.

‍
Secretary Hosemann formally requested the Corps of Engineers to produce a study of the operating procedures for the Morganza Floodway and the Bonnet Carre Spillway along with a study of the environmental impacts to the Mississippi Sound and the State of Mississippi. He said that nobody in Mississippi believes that the 2018-2019 flood is a one-off event, and that the Corps needs to be ready to send more water through levee diversions on the west side of the Mississippi River: into the Barataria basin and down the Atchafalaya River via the Old River Flood Control Structure at Morganza, upriver from Baton Rouge. This way, Mississippi and Southeast Louisiana won’t bear the full burden of the River water releases. Having the fresh water decimate oyster reefs every year or two is not sustainable, and the nutrient-rich water will take algae blooms with it wherever it goes. If other basins can share the load by splitting off a larger percentage of the Mississippi River’s flood waters to the west, Hosemann reasoned that the post-flood recovery time for the Mississippi Coast’s seafood and tourism industries can be shortened.

‍
Hosemann was strident at times as he addressed the Commissioners, and was curious about why the Spillway was opened when the Carrollton (uptown N.O.) gauge reached 17 feet, when the protocol requires waiting for the river to reach 20 feet there before the Spillway is activated. Overall, Secretary Hosemann sought answers about the widespread damage to the Mississippi Coast’s resources and urged the Commission to use its authority to mitigate damage from future floods.

‍
Mississippi Commissioner of Agriculture, Andy Gipson informed the MRC Commissioners about the damage to row-crop agriculture in the lower Mississippi Delta counties from flooding in the Yazoo Backwater Area (YBA). Some farmers there will not be able to plant a crop at all this year. Around 400 homes and structures in the YBA have been submerged for 2-3 months and many of them will be total losses. Gipson asked the Commissioners to complete the Yazoo Pump project so that the lower Delta can have water pumped up and over levees into the Mississippi River when the area receives a dual flooding threat from the Mississippi River and from high water within the Yazoo and Sunflower River Basins. Gipson also gave a progress report on the communications that the State of Mississippi has opened with the Environmental Protection Agency about overturning the 2008 EPA veto of the pump project. Mississippi’s two U.S. Senators, Cindy Hyde-Smith and Roger Wicker have introduced Senate Bills to coax/ require EPA to rescind the veto of the Yazoo pump project. The bills won’t receive a vote for a month or two at the soonest. Gipson believes that pumps could reduce much of the backwater flooding when the Mississippi River and Yazoo systems are separated by the closure of the Steele Bayou gates north of Vicksburg and gravity no longer works to drain the YBA. With the Steele Bayou gates closed, pumps would move confined Yazoo Basin water into the higher Mississippi River. This is similar to New Orleans pumping stormwater from its drainage and canal system up and over levees into Lake Pontchartrain. Both are examples of a gravity drainage system augmented by very large pumps.

‍
A main difference between the Yazoo Pumps and the New Orleans drainage system is the number of people and structures receiving flood risk reduction for the expenditure. The lower Delta north of Vicksburg, Miss. has vast areas of row-crop agriculture fields and forested wetlands sprinkled with little islands of small communities like Holly Bluff and Eagle Lake. Residences and businesses would see some relief from pumping, depending on their elevation, but much of the benefit of pumps would be to remove floodwater more quickly from farm fields in a year like 2019. There would be some drought years along the Mississippi during which the pumps would not be needed.  Also, the Yazoo pumps would be a 100% federally funded project. By comparison, the people of New Orleans pay for the majority of the services of the city’s drainage system.

‍
Almost all of the other 17 speakers addressing the Commission were there to ask for the Yazoo Backwater Pump project to be completed as quickly as possible. One speaker advocated against the pump project. Louie Miller, director of the Mississippi Sierra Club empathized with the people suffering from the Yazoo Backwater Area flooding, but cited the Corps of Engineers’ own statistics to explain that the pumps were not going to help everyone who flooded this year. He said the project carries a cost that does not justify a limited benefit. With the operation plan for the pumps, only about 1/3 of the acres flooded this year would be dried out by the pumps. The other 2/3 of the flooded lands and people in the lower delta would have to wait for the Mississippi River flood to run out of the backwater area by gravity after the Mississippi River level decreased and the gates at Steele Bayou opened. Miller said that existing federal programs can help people elevate homes and roads, do other flood-proofing, and even fund buyouts and relocations of homes, businesses and schools. This would be quicker and cheaper than the pump project.

‍
Sierra Club, the National Wildlife Federation, and Healthy Gulf are three of the many organizations that have had policy positions against building the Yazoo Backwater Pumps over the past 20 years. The main point of opposition has been that the pumps would destroy between 66,000 and 200,000 acres of wetlands, depending on whose estimate of wetland acreage is used. Even at the low end, 66,000 acres equates to 103 square miles of existing wetlands and bottomland hardwood forest that the pumps would dry out enough so that they could be farmed. The conversion of that size of acreage from wetlands to agriculture would vastly eclipse any single, recent, large wetland impact along the Mississippi River between Minnesota and the Gulf of Mexico. Since Healthy Gulf defends wetlands, we have consistently advocated against the pumps, and for alternative types of flood relief for the Yazoo Backwater Area.
After all the pro-pump speakers finished, I had a chance to stand at the microphone and speak to the Commissioners on behalf of Healthy Gulf. I concentrated on the Spillway opening, and the damage to oysters and fisheries in Louisiana and Mississippi. I quoted oyster grower Jakov Jurisich, a member of the Louisiana Oyster Task Force who said: “the oyster industry is flat on its back.” It will take 3-5 years to lay new hard bottoms with oyster cultch: rock, shell or crushed concrete, and plant new oysters on them.

‍
Further, I asked that the Corps write its Bonnet Carre Spillway/2019 Flood Aftermath Study to include an examination of the elevated levels of dissolved nitrogen and phosphorous compounds in the river water, and their consequences for the estuaries of Lake Pontchartrain, Lake Borgne, Biloxi Marshes of St. Bernard, Mississippi Sound and Breton Sound. The opening of the Bonnet Carre Spillway delivers the raw materials that create the Gulf Dead Zone, but sends them instead to shallower and much more confined coastal waters. The eutrophic, over-fertilized conditions have led to algae blooms and lethal levels of dissolved oxygen that are rampant now in Lake Pontchartrain and have closed all of Mississippi’s front beaches along US. Hwy 90. With unusual mortality events affecting the food chain from bottom (oysters) to top (dolphins), the nutrient-polluted condition of the River water delivered to Louisiana and Mississippi in 2019 needs analysis and improvement. This holds true whether the water travels all the way to the mouth of the Mississippi, causing the Gulf Hypoxia Zone, or whether it is bypassed through the Spillway, killing marine life from Lake Pontchartrain to the Mississippi Sound.

‍
I asked the Commissioners to please include a discussion of climate change in the post-event study they write about the 2018-2019 Mississippi River flood. The Commissioners need to recall that Hurricane Barry happened in the middle of the 2019 flood, and carried the very real threat to New Orleans of levee overtopping from a Gulf storm surge pushing inland on a very high river. If the seasons (late river flood and an early hurricane season) continue sliding together as they did in 2019, then climate change needs to be fully discussed in the Corps’ post-flood analysis and in how it conducts future flood fights. Commissioner Dr. Norma Jean Mattei, a U.N.O. engineering professor, had a couple of questions about nutrients in the Mississippi Sound after my presentation, and she nodded her head in agreement when I spoke of the threat to New Orleans posed by a high river during hurricane season – she lives and works there.

‍
The Corps low water inspection tour was traveling downriver to Baton Rouge the next day where I’m sure the Commissioners heard first-hand about the floodwater’s damage to Louisiana’s seafood industry.