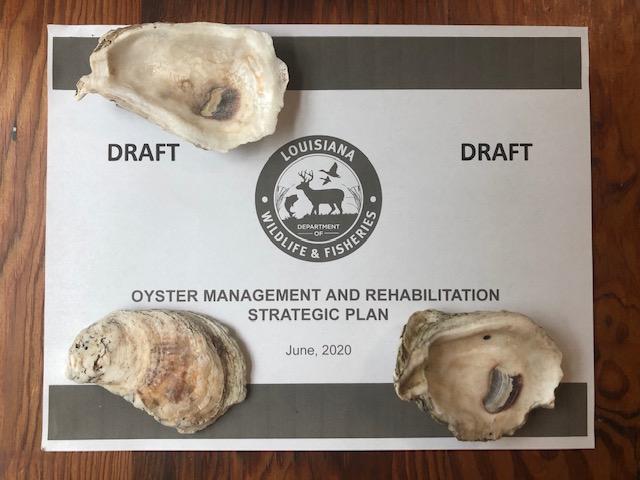 Louisiana's Department of Wildlife and Fisheries recently introduced its new Draft Strategic Plan for Oyster Management and Rehabilitation. The plan has twelve initiatives, a 5-year time frame for implementation and will require a total budget of $132 million.

In mid-August I was able to join an online meeting of the Louisiana Governor’s Commission on Coastal Protection, Restoration and Conservation to hear a presentation of a new Draft Strategic Plan for Oyster Management and Rehabilitation. Louisiana Department of Wildlife and Fisheries Assistant Secretary for Fisheries, Patrick Banks, spoke of the challenges to the oyster industry and introduced a 5 year, $132 million plan that is framed around a dozen initiatives for rehabilitation of oyster growing areas and new directions in the state’s management of its public oyster resource.

‍
Banks reported that oysters are at all-time low levels of abundance on public oyster bottoms (reefs), and this scarcity of oysters has led to 1) decreased fishing opportunities, 2) decreased availability of seed oysters that can be moved onto oyster leases, and 3) a general decrease in ecosystem services provided by healthy oyster reefs. The neighboring state of Mississippi’s oyster resource is in bad shape as well with a closed oyster season due to a ten year slide in oyster abundance.

‍
The economic impact of the oyster industry is substantial. Just in Southeast Louisiana growing areas around the Pearl River in the Lake Borgne, Biloxi Marshes, down toward Breton Sound, between 2012 and 2017, an average of 2 million pounds of oyster meat was harvested each year with a five year combined value of $92 million. (Source: LDWF trip ticket and landing data 2012-17)

‍
Banks explained that changing environmental conditions are making oyster survival difficult in historically good growing areas and as a result of this, spatial conflicts between oyster industry interests and other coastal zone users are becoming more common.

‍
The twelve initiatives in the plan along with their costs (in millions) are:

‍
The State has secured $59 million from four main sources: the Department’s own budget, NOAA fisheries disaster relief funds, Deepwater Horizon (BP spill) settlement funds, and CPRA funds. Potential sources for the remaining $73 M needed are oil spill restoration funds in future years and private sources, Secretary Banks reported.  Secretary Banks made it clear that this is an aggressive plan, considering the five year time frame, but also conveyed a pressing need to get oyster production turned around in Louisiana.

‍
The spawning stock sanctuary network is something that hasn’t been talked about in all of the Gulf States, but  having some no-harvest areas will allow mature oysters to get a chance to make more larval oysters that drift in currents and colonize newly prepared reefs and hard bottom areas. Deliberate forbearance from harvest on some public oyster bottoms looks more and more necessary if a reserve of mature spawning oysters is to be maintained. Over the past 12 months, due to vastly reduced abundance on oyster reefs, Florida has closed Apalachicola Bay to oyster harvest, Mississippi has closed its oyster season across its coast, and in some of the areas affected by the Bonnet Carre spillway opening during the 2018-2019 Mississippi River flood fisheries disaster in both Louisiana and Mississippi, public reefs were at or near zero percent for presence of live oysters in post flood event sampling.

‍
We will follow this draft plan as it is refined and made into a final product.