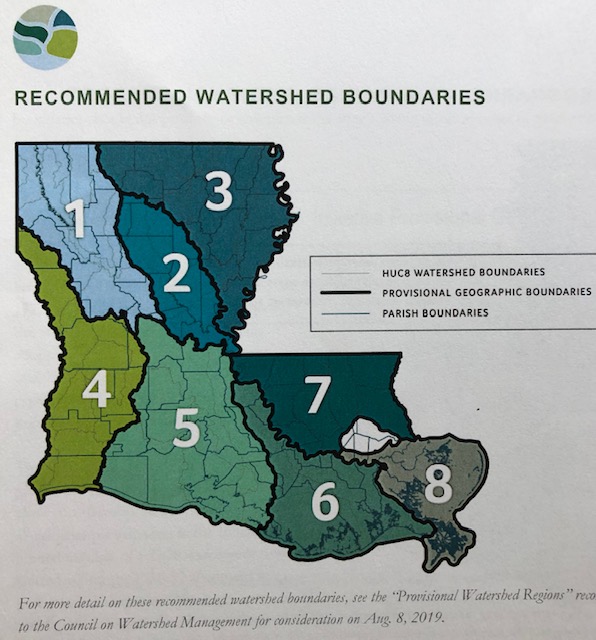 The Louisiana Council on Watershed Management met and voted on boundaries for the 8 watershed regions of the state and announced the availability of Capacity Building Grants for Parishes.

On Thursday August 8th, the Louisiana Watershed Initiative held a meeting of the Council on Watershed Management. Five agency members representing the Louisiana Governor’s Homeland Security Office, CPRA, Department of Transportation, Wildlife and Fisheries and Office of Community Development. Pat Forbes of OCD was elected for a new term as chairman of the group.

‍
The council’s most important piece of business was to vote to adopt watershed boundaries that delineate the state into eight regions for flood reduction and management. These boundaries have been vetted and discussed over the last 2-3 months with Parishes and other relevant jurisdictions, and with some modification of an original map of provisional boundaries, a final map was voted on and adopted. One comment that was acted upon was “Don’t lump together the Northshore Parishes with the south shore of Lake Pontchartrain.” The final map reflects this preference of St. Tammany Parish. The greatest number of critical comments came from the western (region 4) and eastern (region 8) edges of Louisiana – the areas of the state sharing boundaries with Texas and Mississippi.

‍
Positive comments on the boundary setting came from Harold Sheffler from Lafayette, St. Tammany Parish President Pat Brister, and from Guy Cormier of the Police Jury Association. After these comments and before the vote to accept the boundaries, Pat Forbes Director of the Office of Community Development and chair of the council addressed the room: “We have to do this in a way that outlasts the money, so we can be more resilient, lose fewer structures and get people home faster after flood events and reduce the long term negative impacts of the flooding.” He seemed to summarize the feeling of the room, because many heads were nodding in agreement during his words. After the vote, Forbes said “We in Louisiana are miles ahead of every other state that has the planned grant money coming.”

‍
With the eight regions now settled, the opening of a Regional Capacity Building Grant Program was announced. The source of the money is a previous allocation so these grants are not dependent on the $1.2 Billion that are coming to the state as Block Grants from Congress through HUD. The Regional Capacity Grants will be up to $400,000 over three years. One application can be accepted from each region, so Parishes need to collaborate and settle on a fiscal agent in some political subdivision through which to channel and manage this early planning money. Participation in this grant program is a pre-requisite for receiving future monies in the Louisiana Watershed Initiative, so this first round of applications is very important. The way Alex Carter of LWI described them was that the Capacity Building Grants “put a region in a better position for applying for money later”, and she announced that a webinar would follow soon. August 15th was the date for solicitation of applications, and there will be an applicant briefing on September 16th in Baton Rouge 10-3 at the LaSalle Building on 3rd Street.

‍
A few comments on the progress of LIDAR image collection came from Curt Johnson of LDOT and one question from Hampton Peel of the Louisiana Geological Survey was asked about the need to make slight future adjustments to region boundaries. (Yes, the boundaries are “living boundaries” and can be adjusted if flood risks aren’t managed well with what has been drawn so far, according to Ms. Carter). Also, it seems Texas wants to host another interstate summit like the one that LWI held in Bossier City in May. The meeting ended and by the time this article is being written, the Parishes in each of the eight regions are probably collaborating to figure out who will work on the Capacity Building Grants.

Andrew Whitehurst is Healthy Gulf's Water Program Director and covers water issues in Mississippi and the Florida Parishes of Louisiana.