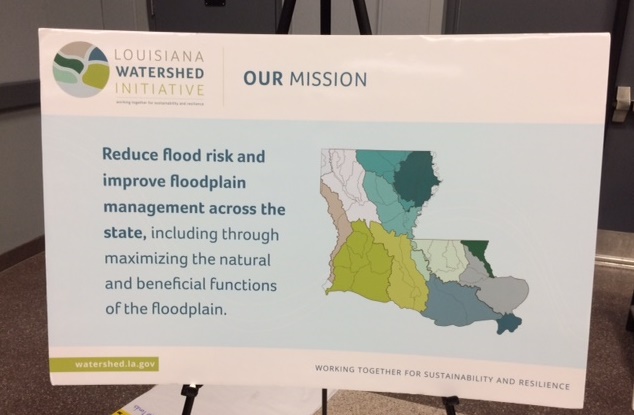 The Louisiana Office of Community Development hosted its third La. Watershed Initiative Summit on the subject of Cross-Boundary Water Issues.

The Louisiana Watershed Initiative (LWI) held a successful and well attended Interstate Summit in Bossier City, La on June 12th. The meeting title was “Addressing Challenges Across State Lines” - the third large single-topic summit that LWI has hosted since last fall when it wrapped up a listening tour around Louisiana to hear flood control concerns in the state’s various watersheds. Pat Forbes, Director of the Louisiana Office of Community Development (OCD), and Alex Carter, LWI Planning Manager both welcomed everyone, handled introductions and skillfully set the tone for an informative and productive set of speakers and discussions.

‍
The LWI and Council on Watershed Management were set up with the blessing of the Louisiana Legislature and charged by Governor John Bel Edwards as a collaboration among 5 executive agencies to develop a flood mitigation system organized along the state’s regional watersheds. It was clear from what Pat Forbes said that a paradigm shift in thinking is what the state needs in order to effect a transition in thinking about water and flooding. There needs to be a move away from the jurisdictional boundaries of governments (parishes, cities, levee boards) toward thinking about the geographical boundaries that define watersheds.

‍
Texas and Mississippi were featured in the first speaker panel. Mississippi’s Emergency Management Agency sent Stacey Ricks and MDEQ sent Steve Champlin to talk about FEMA flood maps, and the local jurisdictional approaches that Mississippi uses to govern building structures and roads within the various floodplains in which its towns and cities exist. Not everyone lives next to an active floodway, but we all live within some kind of floodplain in a watershed. Regulation is at the local (city or county) level, but enforcement in Mississippi is a pass-through to the federal agency, FEMA. One nugget that Ricks and Champlin pointed out was the monetary result of an individual property owner having federal flood insurance. Without flood insurance, in Mississippi, the average recovery to an individual is $6900, but with flood insurance the average recovery is $82,000. They also said that some communities have adopted more aggressive ordinances on flood protection and have accordingly been granted discounts on flood insurance for their property owners, so there is a "carrot and stick" approach that FEMA is using to encourage better design practices so that structures are less likely to flood in the first place. In Mississippi, 32 communities have opted into FEMA’s Community Rating System (CRS) and many have realized insurance discounts. Mr. Ricks said that there are ample opportunities for city and agency personnel and even for regular citizens to take courses about FEMA flood subjects. MEMA teaches four such courses, beginning with a basic class titled “Floodplains 101”.

‍
Texas sent Shawn Strange of the Texas General Land Office and Mindy Conyers of the Texas Water Development Board to talk about the state’s responses to some recent and very serious flooding events including Hurricane Harvey which soaked Houston with unprecedented tropical rains two summers ago. Texas, like Louisiana, is in the middle of the application process to get Recovery funds (Community Development Block Grants for Recovery) from HUD. Louisiana will get $1.2 billion in the wake of the Amite River flooding in East Baton Rouge and Livingston Parishes and Texas will receive $4.3 billion in the wake of Hurricane Harvey and two other episodes of flooding around the state in 2015 and 2016. Aside from the differences in the amount of damage, the demands on both Louisiana and Texas are similar in justifying and implementing projects that use this federal recovery money. One basic thing that both states must do is begin with the best possible data on rainfall, stormwater, rivers and groundwater contributions to streams so that the best watershed modeling science can be done. The quality of watershed modeling seemingly drives everything else – floodplain mapping, building requirements in floodplains, strategies to educate decision makers and citizens about how best to live with flood risk, etc.

‍
Caddo Lake Institute provided a nice lunch for everyone and there were excellent lunchtime talks by Mindy Conyers of the Texas Water Development Board (statewide flood risk survey) and Chris Dalbom of Tulane’s Institute on Water Resources Law and Policy (drafting Louisiana’s Comprehensive Water Code).
The bulk of the afternoon was devoted to work sessions and group reporting on four topics: Modeling and data sharing across state lines; Policy, law and ordinances to reduce flood risk; Communicating flood risk to communities; and Working with federal partners.

‍
Arkansas was not able to send very many people to the conference because many of the state’s floodplain experts were engaged in the real-time challenge of managing a crisis along the Arkansas River where floodwaters broke through levees in the past two weeks. Outside of Mississippi’s agency staff discussing the floodplain mapping and enforcement efforts, there was not much engagement or information exchange on the watersheds that Louisiana and Mississippi share: the independent stream basins that flow to Lake Pontchartrain, or the regulated Pearl River which can flood Louisiana or starve it of fresh water through reservoir management operations at the Ross Barnett Dam north of Jackson. Maybe those interstate topics can be picked up and discussed at other times and venues.

‍
The day felt like a success for the LWI and Office of Community Development because it convened, informed and engaged many of the groups, agencies and individuals that the state will need to work with as partners as LWI proceeds.

Andrew Whitehurst is Healthy Gulf's Water Program Director and works in Mississippi and Louisiana on water and wetlands matters. He lives in Madison, Ms.