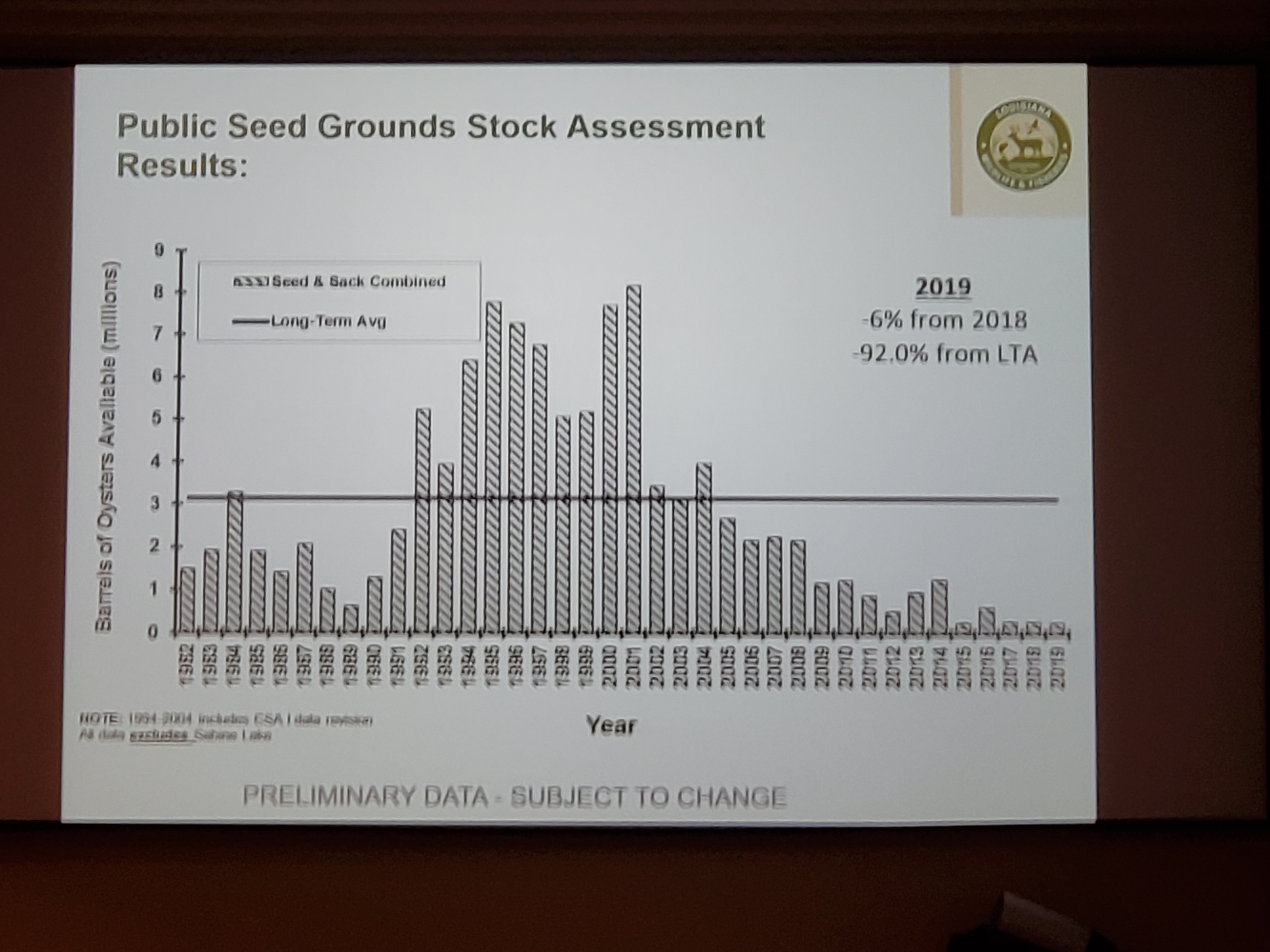 The July meeting of the La. Oyster Task Force looked at post flood damage assessments to oyster stocks in southeast Louisiana and discussed how oyster growers can be compensated when the U.S. Dept of Commerce designates the 2019 flood aftermath as a fishery disaster. Everyone urged patience with the process.

At the July 30th meeting of the Louisiana Oyster Task Force, there was a report from biologists at the Louisiana Department of Wildlife and Fisheries on recent sampling on public oyster reefs, along with an update on the recent trip oyster industry representatives took to Washington D.C. to talk about the destruction of oysters by Mississippi River floodwater. This fly-in trip was to request help from Congress and to ask Secretary of Commerce, Wilbur Ross, to declare a fisheries disaster due to the impact of the 2018-2019 Mississippi River flooding on oyster resources in southeast Louisiana.

‍
This year, the spillway was open for 123 days, allowing Mississippi River water to flow through the Bonnet Carre Spillway into Lakes Pontchartrain and Borgne and into the Mississippi Sound, pushing salinity to very low levels for such a long period that oysters on reefs in St. Bernard and Plaquemines Parishes and in coastal Mississippi died in unprecedented numbers. Sampling efforts by LDWF reported no live oysters in some harvest zones, and a long term decline with 2019 showing the lowest numbers of seed oysters ever recorded on Louisiana’s public oyster reefs.  Managers on state seed grounds and many private leases in southeast Louisiana will have to start over after the 2019 flood - planting new cultch (hard bottom), transferring oysters from living reefs and managing reef rebuilding for the next 3 years. Because oyster growers manage several year-classes of oysters on their leased water bottoms, this year’s extended fresh water exposure killed more than just one year’s harvest worth of oysters.

The oyster industry representatives summarized visits to the D.C. offices of Senator Cassidy and Representative Abraham who gave their time and attention to listen to the big challenges that the industry faces for next 3-5 years. Oyster growers and shippers who spoke about the Washington visit expressed more interest in direct compensation for loss to their businesses than in loans. Some of the questions raised were about the accounting needed to describe losses, and how the unique features of oyster growth cycles will translate to damage assessments. For instance, how will expenditures on cultch material such as crushed concrete and limestone be counted from year to year, and how does an annual 2018 to 2019 revenue comparison (before and after the 2019 Mississippi River flood)   capture the losses to multiple year-classes of oysters on damaged reefs? A loss assessment needs to contemplate planted oysters of different ages being grown for harvest as many as two years in the future, but all killed in the 2019 flood. These things remain to be worked out, but will make a difference in the size of compensation payments, and in the scale and scope of restoration funds needed to re-plant dead or damaged oyster reefs. A loss of 30 or 35 percent of oyster stocks over 12 months was mentioned as a threshold for eligibility in receiving help from a Congressional oyster fishery disaster relief package.

‍
The first thing Congress and Commerce Secretary Ross would need to do is create a bill for compensation for Gulf oyster growers, and it seems that the Louisiana, Mississippi and Alabama delegations are committed to working together to get this done. Oyster growers were clear that they want to see market value paid for their full grown and immature oysters. The state Department of Wildlife and Fisheries is surveying public beds for damage, and the percentages of loss on public oyster reefs could serve as a proxy for oyster losses on adjacent or nearby private oyster lease areas.  More than one speaker commented on the need for patience during the Congressional process. It was generally agreed that nothing will come from Congress until after 2019 due to the need for growers and fishermen to assess damages for the full calendar year.

‍
Ideas were offered by task force members for some forms of relief over the next 2-3 years from the state, originating with the Legislature or the Commission at the LDWF, like suspension of license or permit fees or amnesty from lease payments for at least a period while the oyster industry regains its feet. Tax credits meant to help reduce the costs of replacing cultch material were mentioned. Some of these relief ideas would require executive agency action and some would require legislation to be passed in next year’s session. The possibility of a Special Legislative Session to help Louisiana’s fishing industry was also discussed. Patience was urged on everyone’s part as the meeting ended as the industry moves forward on Congressional and state programs for compensation and relief, steering   Louisiana’s oyster fishery toward recovery.