If you can't get to the Gulf, how can you care about the Gulf? 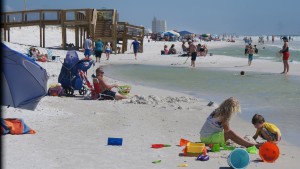 Families enjoy a fall day at the beach on Santa Rosa Island at Pensacola Beach, FL.

Imagine showing up for a day at the beach and being told that you're on private property and have to leave. That's what's happening on Gulf beaches in the Florida panhandle, where the public's ability to simply dip their toes into the waters of the Gulf is at risk. The flashpoint in all of this is along a little 26 mile stretch of panhandle coast in Walton County just east of Destin. As the beaches got busier in recent years, Gulf front property owners began to put out ropes and no trespassing signs to keep people off the beaches behind their homes.Some of these beach areas are indeed privately owned, but the public has never been restricted from freely using them until very recently. That fact has allowed other communities in Florida to establish what is called customary use. This is the legal concept that the public has used these beaches freely, without interruption, and without challenge "since time immemorial" in the words of the Florida Supreme Court. Therefore, the public has a right to continue to use them. Then along came the Florida legislature, which this year passed a law that made it harder for local governments to establish customary use, requiring them to go to court to do so. The law set Walton County beaches into chaos this summer, as thousands were denied entry to some beaches and confusion reigned all at the height of tourist season. Now, a massive grassroots campaign is working to ensure public access to Florida's beaches. Walton County officials are asking anyone who has ever visited their beaches to file an affidavit stating when, where, and how they used the beach. This will be used as the County goes to court to legally establish public access to its beaches. This area of the Florida coast attracts millions of visitors, including many from other Gulf states. Some of the best beaches of all in a state known for great beaches�are here. It's a unique area of Florida, as high bluffs of stunted sand oaks drop down onto white sand beaches and emerald green waters. Some of the beach communities include Grayton Beach, Seaside, and Rosemary Beach among others. In many ways the area demonstrates environmental responsibility, with small beach communities built around walking and bicycling. About 40% of the area is in permanent conservation as state parks and forests. With such forethought in community planning, the flap over beach access is especially troubling. I encourage anyone who has ever visited these beaches to file your support for free and open beaches, as I have. Affidavits can be found on the County's website at: https://www.co.walton.fl.us/ The very heart of protecting the Gulf of Mexico is at stake, for if we can't get to the Gulf and spend a day by its side, it will be more difficult for us to love and care for it. That love of the water that so many of us carry was captured nearly 45 years ago by the Florida Supreme Court, which recognized it in its landmark 1974 decision that established the precedent for customary use of the state's beaches."The lure of the ocean is universal; to battle with its refreshing breakers a delight. Many are they who have felt the lifegiving touch of its healing waters and its clean dust-free air."�Florida Supreme Court, City of Daytona Beach v. Tona-Rama, Inc., 1974