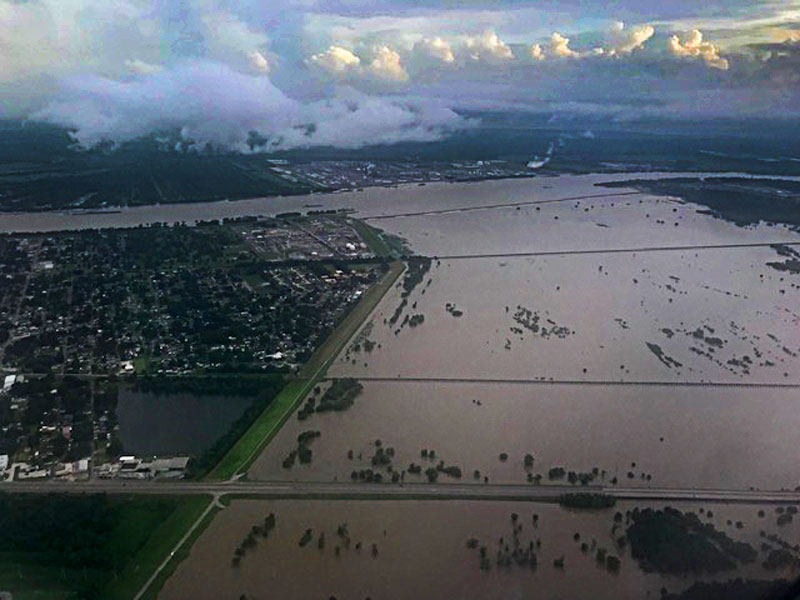 In the wake of Hurricane Barry, a lot of ink was spilled over whether the projections of the storm were too dire or not dire enough, whether the city of New Orleans made the right call to tell people to shelter in place, and whether we can trust the Army Corps to keep us safe.

All of these discussions are absolutely worth having, but we at Healthy Gulf think there’s an even more important conversation that needs to be prioritized. Let’s talk about being proactive rather than reactive.

2019 is projected to be the hottest and the wettest year in recorded human history. We cannot afford to keep playing defense and hoping our reactive measures will be enough to stop the approaching seas from colliding with the ever fattening river. We basically have no idea what will happen if a strong hurricane hits the Gulf Coast with the Mississippi River at near-flood levels.

So let’s talk about long-term solutions to keep us safe and thriving in the Gulf South and how we’re going to build the political will to enact them. Rather than accept that we’re living in a “new normal,” let’s talk about what we need to do to make this the old normal. We have survived other “new normals” like the Dust Bowl in the past and can again, but we have to get at the root of the problem.

Here are several programs Healthy Gulf is working on right now that can help us avoid future Barry scenarios in the years to come. Let’s be clear: all of these problems are connected, so we can’t just focus on one or two problems at once. We need a holistic approach to fix an existential problem. The good news is that many of these programs benefit us in more ways than just hurricane and flood protection.

Healthy Gulf is working with the Pew Charitable Trusts to restore the natural barriers in the Gulf of Mexico that have historically provided our coast with hurricane protection. “Living shorelines” refers to both native vegetation and hard structures like oyster reefs.

Native vegetation dampens wave energy and slows down storm surge, but it also traps sediment and slows down erosion, restoring our disappearing coastline. It provides habitat for economically important fish, which our coastal communities depend on for income. Natural vegetation also stores carbon dioxide, helping to slow down the effects of the climate crisis.

Oyster reefs protect and stabilize the native vegetation and also act to dispel wave energy. A single oyster can filter up to 75 gallons of water per day and help improve water quality along the shore. Oysters are also delicious and provide a living to seafood harvesters along the coast.

But as we saw with the disastrous effects of too much freshwater entering the estuaries at one time, we also need to be proactive about capturing freshwater in other places if we plan to invest in living shorelines.

Much of the City of New Orleans is below sea level and the Gulf Coast regions gets by far the largest rainfall totals in the country.  The business-as-usual plan is to pump the water out as fast as possible. When the pumps are fully operational, which is by no means a given, we can handle an inch of rain in the first hour and a half inch every subsequent hour.

The lessons coming more and more frequently in the past three years are that pumps, while still essential, will never be enough.  A shift in thinking is represented by the Urban Water Plan that promotes ways to live with water as an asset, managing it where it falls before entering the streets and the drainage system.  As a founding member of the Water Collaborative of Greater New Orleans, Healthy Gulf fought for and won the new stormwater management requirements of the City’s Comprehensive Zoning Ordinance. As a result, new renovations and construction must retain the first inch and a quarter of rain that falls on 5,000 or more square feet of impermeable surface.  Single and double family residences are exempt. As a result millions of gallons of rain are held back from having to be pumped when the pumps are backed up.

However, the lessons of the most recent “less than extraordinary” rain events of 6,8 and 9 inches of rain is that we must find ways to incentivize everyone to manage rain where it falls. It saves the city money and power when stormwater is managed before entering the street and drainage system.  So we are having conversations with our members and partners about how incentives could be offered for property owners to reduce flood risk to all.

Flooding across the Mississippi River basin devastated communities in 2019, highlighting the need for better water management throughout the country to address extreme rain events. The Bonnet Carre Spillway has now opened four times in the past four years. It will likely open with more regularity as upstream wetlands continue to be filled and climate change increases the volume of water circulating from the Gulf into rainfall events across the Mississippi River and Pearl River watersheds.

For 25 years, Healthy Gulf has been advocating for better federal water and wetlands management. Only by reestablishing floodplain wetlands at a large scale throughout the watershed will we be able to prevent regular catastrophic freshwater releases into the Gulf.

When the Bonnet Carre Spillway opens at this intensity, it connects the Mississippi Sound with the Mississippi River watershed. This connection brings all the problems associated with the river, including nitrogen and phosphorus pollution, microplastics, and other industrial waste from upriver states.

Upriver wetlands will help filter some of this nutrient pollution. They also capture more of the rainwater as it falls, reducing the pressure on the Mississippi River system that threatened much of South Louisiana with flooding during Hurricane Barry. The Mississippi River drains 41% of the continental United States. It’s time for the rest of the country to step up. The Gulf South has had to bear the burden of poor federal water management for far too long.

Coastal wetlands are the region’s “insurance policy”, safeguarding communities against flood risk from storms.  Furthermore, southeast Louisiana is losing land at an astonishing rate, due to a suite of factors including clearing wetlands,  oil and gas extraction, cutting channels into marsh (often for petrochemical pipelines or material transportation), and sea level rise from climate change.  These factors have brought us to the present day, where disintegration of marshes and swamps are destroying the capacity of valuable wetlands to absorb water in a flood or storm surge.  There are over 10,000 miles of canals in coastal Louisiana, and at least double that of spoil banks that choke off wetlands ecosystems.  Spoil banks act as levees for the canals which had no natural levees before, thus dramatically isolating marshes and swamps so they no longer build land.

Cutting canals into Louisiana’s wetlands has created a fragmented, severely debilitated ecosystem that can no longer provide protection from storms.  Despite this, thousands of acres of pipelines through wetlands are rubber-stamped with approval every year by the State of Louisiana and the Army Corps of Engineers.  It seems preposterous that Louisiana is spending billions on coastal restoration through the Coastal Protection and Restoration Authority, yet meanwhile it is actively granting permits authorizing thousands of acres of new canals.  Limiting wetland destruction seems like a no-brainer, and would give Louisianans a better first-defense, natural storm insurance policy.  The fact that the State continues to turn a blind eye to stopping wetland destruction means that they are endangering residents and ecosystems.  The State is endangering the very things we value so dearly in southern Louisiana.

Many of the coastal projects approved in Louisiana are toxic petrochemical facilities with significant public health impacts. They are also major contributors to climate change. One of the many projects we’re currently fighting is the proposed Formosa Plastic Pollution Complex in St. James Parish. It’s a perfect example of misguided development that contributes to hurricanes and flood risk. Formosa would emit 13 million tons of greenhouse gases every year, the equivalent of three coal-fired power plants. If approved, it would be one of the single largest greenhouse emitters approved in the last decade. We have to stop these facilities before they are allowed to take root. The comment period is open until August 12 and you can weigh in here.

We need an actual plan to address climate change that rises to the scope of the challenge presented by the Intergovernmental Panel on Climate Change’s projections. The effort to avoid ecological collapse will require fundamental changes in our economy and a nationwide/global mobilization that we haven’t seen since World War II. Because we are all involved in this fight, we need a plan that benefits everyone.

The Green New Deal is the only proposed plan that rises to that challenge.

You can read the Green New Deal resolution for yourself here, but the New Consensus, a think tank working on one version of the plan, lists five main goals:

Healthy Gulf is partnering with Gulf Coast Center for Law and Policy, the Sunrise Movement, and other local leaders to create a Green New Deal vision specifically tailored to the Gulf South. Our work aims to connect the dots between the climate crisis, the coastal crisis, the economic crisis, and the political crisis in the region; re-imagine our collective future for the Gulf South region through tailored policy and action platforms; and build power from the ground up across the lines of race, class, gender and generation. ​

Hurricane Barry showed us that we are entering unprecedented climate territory. Unless we do something about it, it’s only going to get worse from here. It’s time for us to enter unprecedented political territory and work together on real, proactive solutions.