Help Us Lookout for Gulf wetlands 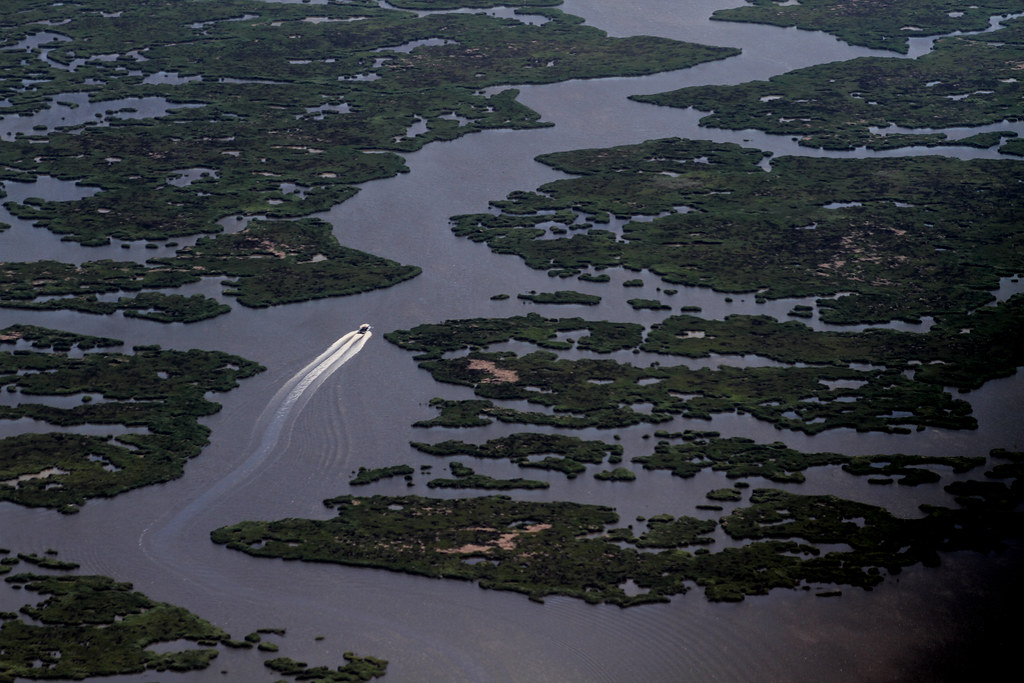 A vessel passes by coastal marshes drowning under a rising sea. Aerial photographs can give us a perspective not available by boat.

If you can see it, you can change it. That's why HealthyGulf has partnered with Cartosco.pe and Northeastern University to create Land Loss Lookout, which can train your eye to see how climate change is drowning Louisiana's wetlands.

On Louisiana's Gulf Coast, the Mississippi River Delta has grown into one of the most fertile landscapes in the world.  Despite this economic and biological value, this delta has seen some of the largest ecosystem losses on record, including over 400 square miles of marshland lost to oil and gas activity (USGS Ofr 00-418). From New Orleans to Lake Charles, Louisiana is a much safer place from powerful storms of the Gulf with our wetlands than without (CPRA). In addition, now, faster than ever, the sea is rising, drowning even more land (CPRA).

Companies lobby the government to avoid the government accounting for their environmental impacts, and we need people power to counter their efforts. Chevron has poured money into public relations in order to dismiss Louisiana's coastal use lawsuits, since it stands to lose billions should Louisiana's law be enforced (Imani Brown, in press). Taylor Energy has spent a lot of money on lawsuits to sue Couvillion Group and the Coast Guard, because the lawsuit may win them millions of dollars back from the government (CIVIL ACTION NO.: 18-14046 c/w 18-14051 31 Aug 2020). And now, although climate change is the largest single threat to Louisiana's wetlands between now and 2067 (CPRA), Carbon-spewing companies like Venture Global LNG want to avoid mitigating for wetlands lost to their climate emissions. They have stated that there is no "proof" that sea level rise (VGLNG Aug 5th, 2019), driven by their many megatons of carbon emissions (Glick 2019), is drowning wetlands.

But we can see the drowning happening. When we fly over the wetlands, or look at google maps, a thousand small ponds speckle the marshlands, as lower-lying areas become too inundated to support plant life. This disintegration of land is happening in places invisible from our boats in the normal waterways, far from oilfields, and far from shipping canals we normally associate with wetlands loss. We call on you to witness this as well. Look at our coast with Land Loss Lookout, and tell us what patterns you see.

Ultimately, we need the governments and companies who took the land away to restore it for our food and our shelter, but also for the sake of global wildlife.

A following tutorial will teach you how to identify one characteristic pattern of land loss. You’ll then be shown photographs and have a chance to indicate whether you can see that pattern in the photograph.

This project is vital, as we haven't seen fossil fuel companies doing necessary impact assessments of their carbon pollution. They are merely denying that this is happening, and denying their role in it (VGLNG Aug 5th, 2019). So it's time for those of us at HealthyGulf and around the world to act. We have to mark that these places and help establish why and how these lands are being lost.

We know that if you join us to look out for the land, we'll have a more restored Gulf, a better home, at the end of the day.

Consider becoming a member today or help support our efforts to restore the Gulf Coast at healthygulf.org/donate.

Thanks for looking out!  Click here to go to Land Loss Lookout!