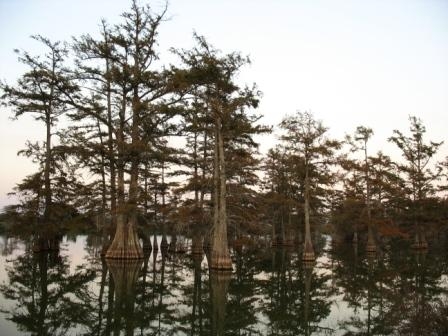 Healthy Gulf joined American Rivers, National Audubon Society and Sierra Club in a lawsuit against the Environmental Protection Agency, asking a federal judge to rule on whether EPA's 2008 Clean Water Act veto of the Yazoo Backwater Pump project still applies to a 2020 Army Corps of Engineers re-do. The project's pumping capacity and purpose remain the same as the earlier project which was vetoed during the George W. Bush Administration. The project's impacts to wetlands and habitats remain significant in the 2020 re-do version, and the Conservation Groups maintain that the veto still prohibits the pumps. EPA has used a Clean Water Act veto on a development project 13 times since 1972. The agency has slightly modified some vetoes after-the-fact, but has never completely revoked one.

This Tuesday, Healthy Gulf along with American Rivers, National Audubon Society and Sierra Club sued the Environmental Protection Agency. Represented by Earthjustice, we are asking a federal court to examine whether EPA violated its own rules when it removed a legal roadblock to the controversial Yazoo Backwater Area Pump project.  Deeming the Yazoo Pumps project too environmentally destructive, EPA vetoed the project in 2008. This Clean Water Act veto of the pump project is the central issue in the petition the four conservation groups filed Tuesday January 12th with the U.S. District Court for the District of Columbia. The veto made during the George W. Bush administration isn’t officially lifted, but the EPA has now declared it doesn’t apply to the 2020 version of the pump project. In effect, EPA has revoked its 2008 veto in a manner contrary to the administrative record without providing a rational basis, or going through a required notice and comment procedure applicable to an agency action.

‍
Eleven days after the comment period closed on the Yazoo Pumps 2020 Draft Supplemental Environmental Impact Statement (SEIS), the Army Corps of Engineers (Corps) published a Final SEIS and the Corps and EPA announced that the project would be moving forward. This was a very fast turnaround time on such a complex document, clearly due to the need for the agencies to take action before the Trump Presidency ends. The big question for the 2020 Yazoo Pump project is the fate of the 2008 EPA Clean Water Act veto that stopped the 2007 version of the pumps – one of only 13 such vetoes in the history of Clean Water Act jurisprudence. It turns out that when EPA submitted its final comments on the project on November 30th, the agency wrote an accompanying cover letter to the Corps explaining that the 2008 veto does not apply to the current version of the Yazoo Backwater Pump project, thereby allowing the project to proceed.

‍
The EPA claims that the 2020 version of the pump project is substantially different from the 2007 project and not subject to the veto that stopped it. We disagree; the same size project is being built - a 14,000 cubic ft. per second pumping plant, and the same area of land is being drained by pumping water from the interior Yazoo Backwater sump area over levees into the Yazoo and Mississippi Rivers. Also, the wetland impacts of the new project remain unacceptably large. The pump’s operating procedures are the same as in 2007- the pumps are turned on when the level of the water in the backwater area reaches 87 feet above sea level. These aspects of the project remain the same.  Differences include moving the site of the pump installation about 10 miles east, and powering the pumps with natural gas instead of diesel fuel. These changes hardly change the purpose and impact of this destructive project.

‍
The lawsuit maintains that the primary reasons for the 2007 pump veto have not changed and still have not been addressed in 2020’s version of the project: excessive disruption to wetlands and their functions in providing aquatic habitat for fish and wildlife, and because of inadequate wetland mitigation. The veto should still apply because this is essentially the same project.   The Yazoo Backwater Area is home to several hundred thousand acres of farm land, and received significant federal conservation investment for decades on both public and private lands including wetland restoration projects, reforestation, and the establishment of federal wildlife refuges, a national forest and several state wildlife areas. According to the Corps, building the pumps would degrade the wetland function on at least 38, 774, acres (60 square miles) of public and private land. This damage to wetlands would allow for 9,700 wetland acres to be dry enough to be converted to crop land (this is the Corps’ conservative estimate found in their comment response). It is ironic that one of the basic objectives discussed in the first few pages of the Corp’s 2020 Yazoo Pumps SEIS is “provide reduced levels of agricultural intensification.”

‍
There is a history of the main federal agencies disagreeing over the Yazoo Pump project. The Army Corps of Engineers conceived the project in the 1940s and has never wavered in supporting the pumps.  In 2007, the U.S. Fish and Wildlife Service (USFWS) and the EPA were in disagreement with the Corps over how many acres of wetlands would be degraded as pumping operations dried out wetlands over time in the different flood-frequency elevation zones in the Yazoo Backwater Area. Reading the 2020 scientific comments from both USFWS and EPA, it is apparent that federal agency scientists continued to raise numerous valid questions about how the pumps would affect wetlands, fish and wildlife habitat. The Fish and Wildlife Service, judging from its December 2020 Fish and Wildlife Coordination Act report for the pump project,  has the overall impression that the pump project’s SEIS document is not a very well buttoned-up piece of work and was released prematurely. Their comments point out that endangered species consultations still need to take place before USFWS’ statutory requirements can be satisfied. The scientific staff at EPA presented 27 unresolved questions in its comments on November 30th on subjects such as wetland extent and delineation, degradation of remaining wetlands post-project, impacts to fish and aquatic habitat, effects of new data, habitat impacts for migratory birds, water quality, pumping impact on low flow and groundwater, cumulative impacts, wetland mitigation, monitoring and adaptive management, and environmental justice. Despite the questions raised by its scientists, the EPA administrators went ahead and gave the project the green light, detouring around the existing veto. The EPA’s November 30th comments raised the 27 deficiencies, but the cover letter to those comments states that this project is different enough to avoid the veto, and allows the pumps to be built.

‍
What happened in Mississippi to put pressure on EPA and its 2008 veto was the continued flooding in the Yazoo Backwater Area in 2018 and 2019 that affected farms, forests, residential and commercial structures and roads. People were flooded out of their homes and farmers could not plant in some areas of the Yazoo backwater area during the 2019 growing season after a long fall-winter flood in 2018. The administrations of Mississippi Governors Phil Bryant and Tate Reeves, along with Mississippi’s Congressional delegation have prevailed upon President Donald Trump, and his EPA, that this is the time to build the Yazoo Pump project. The Corps has consistently been in favor of a pump project, as have the farming lobby and the boards of the levee districts in the middle and lower Mississippi Delta Counties. Convincing Congress to fund the Yazoo pumps has been a challenge for nearly seven decades. The actions of EPA “talking out of both sides of its mouth” regarding the veto won’t add clarity if Congress looks at funding. Funding would be 100% federal with no state matching money required.

‍
We are now asking a federal court to examine the newest version of the Yazoo Pump project against the EPA’s Clean Water Act veto from 2008 to see if the agency has acted in a manner that is arbitrary and capricious or contrary to law in its determination to move the pump project forward.