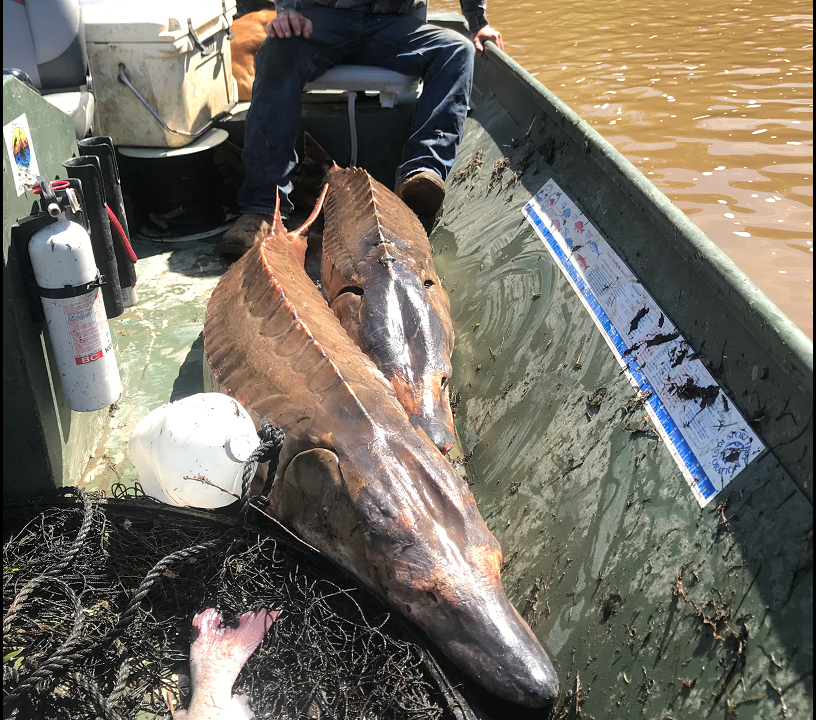 These sturgeon were captured and released by a catfish hoop-net fisherman on the Pearl River in Simpson County, Ms where the Strong River joins the Pearl River, Spring 2018. Theirs was the most recent confirmed occurence of the fish upstream of the concrete sills that block the river near Bogalusa. Credit for photo and 2018 MNHP sturgeon record occurrence: Tyler Polk.

A blog article on USM's "Sturgeon in the Watershed" curriculum, presented at MDEQ's Restoration Summit in Biloxi, along with a look at the recently published Biological Opinion on the impacts of the One Lake Project in Jackson, Ms to two protected species living in the Pearl River.

At the Annual Mississippi Restoration Summit on November 12th, the Mississippi Department of Environmental Quality hosted a speaker session titled: Connecting Upstream Land Conservation and Restoration to Downstream Systems. It was a chance to showcase some of the programs that MDEQ’s Sea Grant Education and Outreach RESTORE Act project has funded. Two universities and three non-profits gave presentations on their efforts. Dr. Jessica Kastler, program director at the University of Southern Mississippi’s Gulf Coast Research Laboratory Marine Education Center reported on her program’s science education curriculum written for 5th grade students. With Jessie’s characteristic creativity and inspiration, Sturgeon in the Watershed was developed as a Meaningful Watershed Education Experience or MWEE as part of the work under the Sea Grant RESTORE funding.

‍
I’ve known Jessie since we were children and have followed her career with interest since we were both at LSU doing research in the early 1990’s. Her doctorate was on marsh soil formation, and since her graduate student days, she has directed education programs at LUMCON in Louisiana and at the Gulf Coast Research Lab in Ocean Springs. The curriculum she’s created uses the migratory Gulf sturgeon, its life cycle and habitat needs as a way to relate Mississippi’s Pearl and Pascagoula rivers to the Mississippi Sound, giving children from the Mississippi Coast an up-close look at how alterations in the river and coastal environments affect these large fish. Gulf sturgeon are considered a threatened species, protected by the Endangered Species Act due to habitat loss - in part due to damming on the coastal rivers they inhabit during part of their life cycles. Sturgeon breed in fresh water and live as adults in the Gulf estuaries and around Mississippi’s Barrier Islands. They ascend rivers on spawning runs just like the much better known Atlantic and Pacific salmon species. Adult Gulf sturgeon reach 200 lbs., and they are known for jumping out of the water. Jessie and her team built a three-day course experience for the children involving an in-class Jeopardy game on life cycle facts, a board game, “ Surging sturgeon”, about challenges to migration for this ancient species of fish, discussions about stewardship, a stewardship pledge, and a day in the field at the GCRL with a boat ride on the “Peetsy B”. In the first year, the sturgeon course reached 300 students in five schools on the coast.

‍
USM isn’t the only institution teaching elementary school children about Endangered Species. For more than 30 years, the heart of the elementary school academic curriculum supported by the Mississippi Museum of Natural Science in Jackson has been built on the full range of species protected by state and federal law in Mississippi. Museum classroom educators teach elementary students about the life cycles and habitat requirements of Gopher tortoises, Black pine snakes, Bald eagles, Black bears, manatees, and many other rare or threatened species of freshwater mussels, turtles, salamanders and plants. The Museum has been the educational arm of the Mississippi Department of Wildlife Fisheries and Parks since 1937. Miss Fannye Cook, the museum’s first director persuaded the state Legislature and Governor to create the state’s Conservation Commission in the first place.

‍
While watching Dr. Kastler tell us how she has used the Sea Grant money to help school children on the coast understand a very important but fairly rare and ancient fish, I could not help but see the contrast between what our children are taught about protected species, and how we adults and our society end up dealing with this protected status under federal law. When development projects like the “One Lake” project on the Pearl River force an agency to make a legal decision on the future status of the Gulf sturgeon or the Ringed sawback turtle, we get a glimpse at the way things really work. Protected status can sometimes look very risky for the things being protected. It would be cruel to teach 5th graders about how the adults in their world decide these matters, but those lessons come with time. If these students go farther with their studies in the biological sciences, they may, in time, be introduced to population dynamics, arguments about methodologies based on literature reviews of scientific journals, and ways to do sampling, and statistics. Some of these are used to make decisions about how species are protected - like the creation of a Biological Opinion (B.O), which is a document required by the Endangered Species Act. It evaluates whether a species is placed in jeopardy of going extinct by a development project that either wrecks its habitat or kills animals outright, or does both.

‍
Recent newspaper articles about the Biological Opinion from the U.S. Fish and Wildlife Service (USFWS) on the effects of the One Lake project would have readers believe that the document exonerates the Rankin Hinds Flood Control and Drainage District (Levee Board) for the damage that their dredging and damming project in Jackson, Mississippi would do to two threatened species (one turtle, one fish) found in the Pearl River. The USFWS Biological Opinion doesn’t absolve the Levee Board of the project’s damage to the river. To the contrary, page 14 of the document’s “hydrology” section has the following statement:

‍
“Overall the Pearl River Basin has undergone alterations due to changes in the landscape (e.g. land clearing, navigation, flood control) that impact the ecological functions of the area. These ongoing impacts have led to the reduction and/or loss of habitat which has resulted in the listing of species under the Endangered Species Act.”

‍
In other words, the reason the Levee Board and the USFWS must protect these species has everything to do with the accumulated impacts to the Pearl River from earlier alterations to the river’s hydrology and habitats. The creation of the Ross Barnett Reservoir in 1963 was the largest single disruption to the Pearl, as all major dams are, but the lower river also has sills that block it, for the now decommissioned Pearl River navigation canal below Bogalusa.  The Levee Board’s lake project will add to the historic damage. A September 2018 official comment letter from USFWS on the Levee Board's Draft Environmental Impact Statement called lake dredging “the most environmental damaging” alternative. The intervening eleven months haven’t changed this aspect of the lake dredging project – it removes 1862 acres of wetlands, and alters bank and river channel habitats more than the levees-only plan. “You can’t make an omelet without breaking eggs” is an apt analogy for lake dredging, with these protected species and their habitats offered up for more breakage on an already fragmented, disrupted river.

‍
What the Biological Opinion provides is an estimated “body count” of the proportions of the existing populations of the Ringed sawback turtle and Gulf sturgeon that will be affected by the “One Lake” project. The project will displace an estimated 20 sturgeon. Dredging the channel and removing streamside trees and vegetation will displace or kill an estimated 1306 Ringed sawback turtles in the ten miles of the river in the project’s footprint. Biologists sample the abundance of fish or turtles with various methods, but estimates must be used for projected mortality or displacement because it is impossible to count exact numbers. In both cases, these numbers represent less than 5% of either animal’s estimated population. That is judged by the USFWS as not enough to place either species in jeopardy of becoming extinct. The closest call is on the turtle, which is an endemic species and restricted to the Pearl system alone. The sturgeon has populations in a few other rivers that drain to the Eastern Gulf. The USFWS Biological Opinion document doesn’t excuse these losses, but it makes the judgment that the mitigation proposed by the Levee Board will be likely to compensate for them, although how long that will take is unknown.  It is important to note that these losses are in addition to the harmful impacts to both species starting in 1963 due to construction of the Barnett Reservoir which destroyed much more sturgeon and turtle habitat.

‍
Depending on who is reading it, the Biological Opinion could be a continuing requiem for the Pearl River’s two protected species that persist in spite of their ever-shrinking and degraded aquatic habitat. Or conversely, it might also be seen as a prelude to a long-desired lake development touted to boost Metro Jackson’s economy while easing flooding risks. Either way, it’s not an exoneration for environmental damage, nor does it make a lake project inevitable, as the project sponsors would have us believe. Overall, the lake dredging alternative is still the most environmentally disruptive plan and remains quite unpopular outside of Rankin and Hinds Counties. Fourteen government entities downstream in both Mississippi and Louisiana oppose it, including the combined Louisiana House and Senate. A levees-only plan that enlarges the floodplain on the Rankin County side of the Pearl is also feasible and would not disrupt the habitats to the same degree as dredging a lake into the river’s channel.

‍
The overall question is why the most environmentally damaging alternative for flood control should be chosen for a river that already has so many impacts and disruptions. The Pearl River needs restoration in many ways, but dredging and impounding it further cannot, by any stretch of the imagination, be considered restoration.

‍
I think about the 5th graders in the USM Sea Grant curriculum, learning about their natural surroundings on the Mississippi Coast, and how they might think more deeply about the fish after completing their “Sturgeon in the Watershed” three day course. In fifteen or twenty years one of these children may be a conservation biologist with a graduate degree, performing the next jeopardy analysis on sturgeon or some other protected species on one of Mississippi's coastal plain rivers. It is odd that a classroom “Jeopardy” game on sturgeon facts coincided with the USFWS biologists' Endangered Species Act jeopardy analysis on the "One Lake" project's effects. The projected impacts to the populations and river habitats on the Pearl didn’t rise to a "jeopardy" level this time for either the sturgeon or the turtle under the ESA. Assurances of habitat mitigation apparently redeemed this Biological Opinion.These animals seem to be able to persist in spite of what we have done to their river, but given what is planned, today's 5th graders have every reason to be concerned.