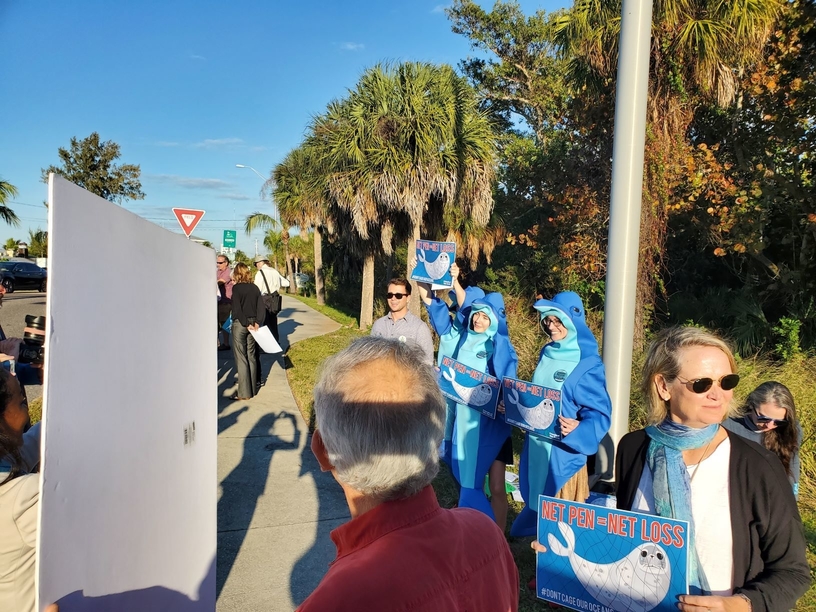 Two weeks ago, I attended a very spirited and well-attended demonstration and public hearing on the proposed Kampachi Farms offshore industrial fish farm’s water pollution permit. The project off the coast of Sarasota involves the concentrated cultivation of finfish in net pens, pods, and cages...

Two weeks ago, I attended a very spirited and well-attended demonstration and public hearing on the proposed Kampachi Farms offshore industrial fish farm’s water pollution permit. The project off the coast of Sarasota involves the concentrated cultivation of finfish in net pens, pods, and cages.

The day started out with dozens of activists standing at a major intersection near the hearing location holding signs, chanting, and talking with members of the media. Our crowd was met with lots of enthusiastic honking and we even had a couple of dolphins join in (see picture).

Afterwards, we made our way to a packed auditorium at Mote Marine Labs where over 200 people gathered to hear more and share their thoughts on the industrial fish farm, and man did they share! Over the course of 3 hours over 50 people presented public testimony with the vast majority of folks speaking in opposition to issue Kampachi’s water pollution permit. There were a wide variety of concerns raised, including how pollution from this facility could harm the environment, the negative impacts that it could have on coastal residents and industries like tourism and fishing, and impacts on marine life. One thing that came up again and again was that this project could produce more of the pollution that leads to toxic algae blooms and red tides.

In recent years, Florida’s Gulf coast has experienced serious red tide and blue green algae blooms that have had far reaching impacts on the coastal economy, people’s health, and wildlife. These events are in part driven by nitrogen and phosphorus pollution and permitting this facility will only add more of this pollution to Florida’s waters.

The Gulf coast’s economy and culture are intimately connected to healthy waters and beaches, and vibrant recreational and commercial fishing industries that provide abundant local seafood to residents and visitors alike. These industries are already facing serious challenges from pollution, natural disasters and foreign competition. Factory fish farms will make it more difficult for our hard working small boat fishermen to make a living while increasing corporate control of seafood production.

I left the hearing feeling energized by the many people who devoted their evening to objecting against this project, but disheartened that the federal government is moving forward permitting it.