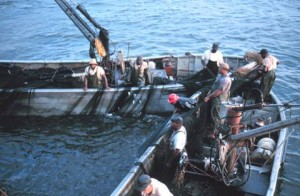 An edited version of this article originally appeared on the blog of the Marine Fish Conservation Network. Advocates in the fisheries world often lament how complicated the policies are and how hard it is to explain the nuances to the general public. Well, fisheries management is extremely esoteric and opaque when you get into the scientific nitty-gritty. But at a fundamental level, the crafting and execution of fisheries policy is the most simple thing in the world. Fisheries are political, and politics is about power. There was a time in my life where I believed we lived in a pluralistic society where political groups could hold differing beliefs and tolerate others who didn't share their opinions. The differing groups would publicly debate the merits of competing ideas using a mutually acceptable common language. Undergirding this all would be a foundation of shared values and a dream for a better future. I still want to live in a world like this. Unfortunately I live in the world we have now, and that this is not how American democracy has been operating. When two sides to an issue have become so diametrically opposed to each other that no basic, fundamental common ground can be achieved, what is there to compromise on? If you believe your enemies are always lying or arguing in bad faith, what is there to debate? In our current partisan climate, politics ultimately comes down to one thing: the ruthless exercise of power. The majority party decides who gets to eat and who is left to starve. The only reasonable tactic in such an environment is to build a bigger coalition than the forces of greed, craft a policy agenda that reflects your values, take power, and then implement that agenda by any legal means necessary. Plain and simple. Compromise in and of itself is not an actual policy goal; it's merely a tactic to grow your coalition. So if fisheries is politics, then our goal must be to build power. Because so much of politics is driven by money, the wealthy have power and the poor do not. Small environmental nonprofits, chef-owned restaurants, and small-boat commercial fishermen have traditionally not wielded the levers of power because their respective fields tend not to generate a lot of money. We will never be able to outspend our opponents, so we have to look to other ways to influence decision makers. No matter how much money flows into politics, all candidates still need votes to win. If we want a coalition that can move votes, we are going to need a big tent of like-minded groups. But we can't build a strong coalition when we are divided from within. Two stories about candidates or voters using catch shares as political tool and the fishing community's internal debate over the catch share system have exposed some of the divisions within that could prevent a successful campaign to defend and improve the Magnuson-Stevens Act (MSA), the nation's landmark fisheries law that had reduced overfishing levels to record lows all while improving the economic output of the fisheries. When good-faith opponents of catch shares talk about the problems with limited access management, the two arguments I hear most often are: Catch shares have led to consolidation within every fishery they have been implemented in. This has led to exacerbated economic inequality and harmed small business owners and workers. Because of catch shares, the small boat commercial industry has no say in the legislative process. I would describe these two problems as economic inequality and plutocracy, but they are hardly unique to fisheries. To me, these have been the two most fundamental threats to our democracy for decades. Real wages haven't risen for most workers in decades. Congress members have a net worth that is five times the national median. There are undoubtedly problems with the catch share system, but there is a danger with conflating the management-by-weight system of catch shares with general problems of American democracy. This is because catch shares have been potent rhetorical fodder for certain recreational fishing interests who do not have the best interests of the fish at heart and are arguing in bad faith. As we saw last year with the Magnuson-Stevens Act reauthorization process, the last thing we need to do is help arm them in their campaign to gut MSA in the name of catch share "reform." The good news for 2019 is that we will have new leadership in the House of Representatives and a new MSA bill will likely emerge from the Water, Power and Oceans subcommittee. Sure, the two chambers of Congress are divided and this has traditionally led to gridlock, but fish policy doesn't have to be a partisan issue. Some compromise on certain issues will be necessary to build a coalition large enough to get a reauthorization bill into law. Those of us who have the best interest of fishing communities at heart don't always agree on everything, but that doesn't mean we can afford NOT to work together. The opportunity to have a say in the MSA reauthorization comes around less than once a decade. Now is the time to build power and craft an agenda that we can successfully execute. We should be inclusive but also wary of bedfellows who don't share our values. We should be extremely cautious with our language. If economic inequality and impossibly high barriers of entry for young fishermen are core issues, let's talk about how to fix them. If a lack of representation on the regional councils is a problem, then let's build a coalition powerful enough that we can't be ignored when the state governors appoint the next council members. The political system hasn't always worked for us, but that doesn't mean we can't seize it for ourselves. If we want to make the world a better place, we cannot afford to be divided. Let's be smart. Let's get stronger. Let's win.