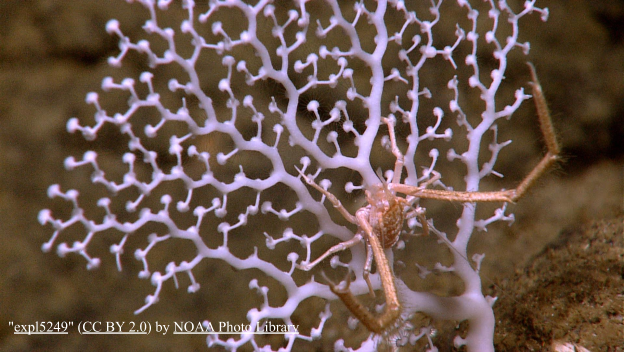 Stony corals, also known as Scleractinians or hard corals, are in the hexacoral family and build hard skeletons out of calcium carbonate. They are the primary reef building corals. Stony corals have tentacles in multiples of six and can host diverse species of fish and invertebrates. Two species of stony coral commonly found in the Gulf are Lophelia pertusa and Madrepora oculata (zigzag coral), with Lophelia being found much more commonly than Madrepora.

While most species of stony coral grow on hard substrate and are solitary, some species such as Lophelia can form giant, branching structures. This is not the most common type of coral found in the deep ocean though, and the 2016 Report to Congress produced by NOAA reported that “stony corals were not especially abundant or diverse. A solitary, small cup coral was the most often observed stony coral, usually seen on canyon walls and in dense aggregations along ledges or overhangs."

Because stony corals have skeletons made out of calcium carbonate, they face particularly acute threats from ocean acidification. Deeper water is  naturally more acidic than shallow water to start with, and so increased acidity may start to dissolve some of the coral skeleton.

Below are highlights of specific kinds of stony corals. One of the most ubiquitous types of stony coral, Lophelia sp., has enough information that it will be the subject of a future post.

Cup coral
‍
This species of hard coral occurs as single polyps. This means that this species of stony coral does not form reefs but may be found in reef communities where cup corals can be found growing along side other speices of coral.

Cup corals lives on rocks, dead corals, and other hard substrate from depths of 700 to 3,000 feet, and have been observed from North Carolina throughout the Gulf. In the Atlantic, cup corals are one of the most commonly seen species of deep sea coral.