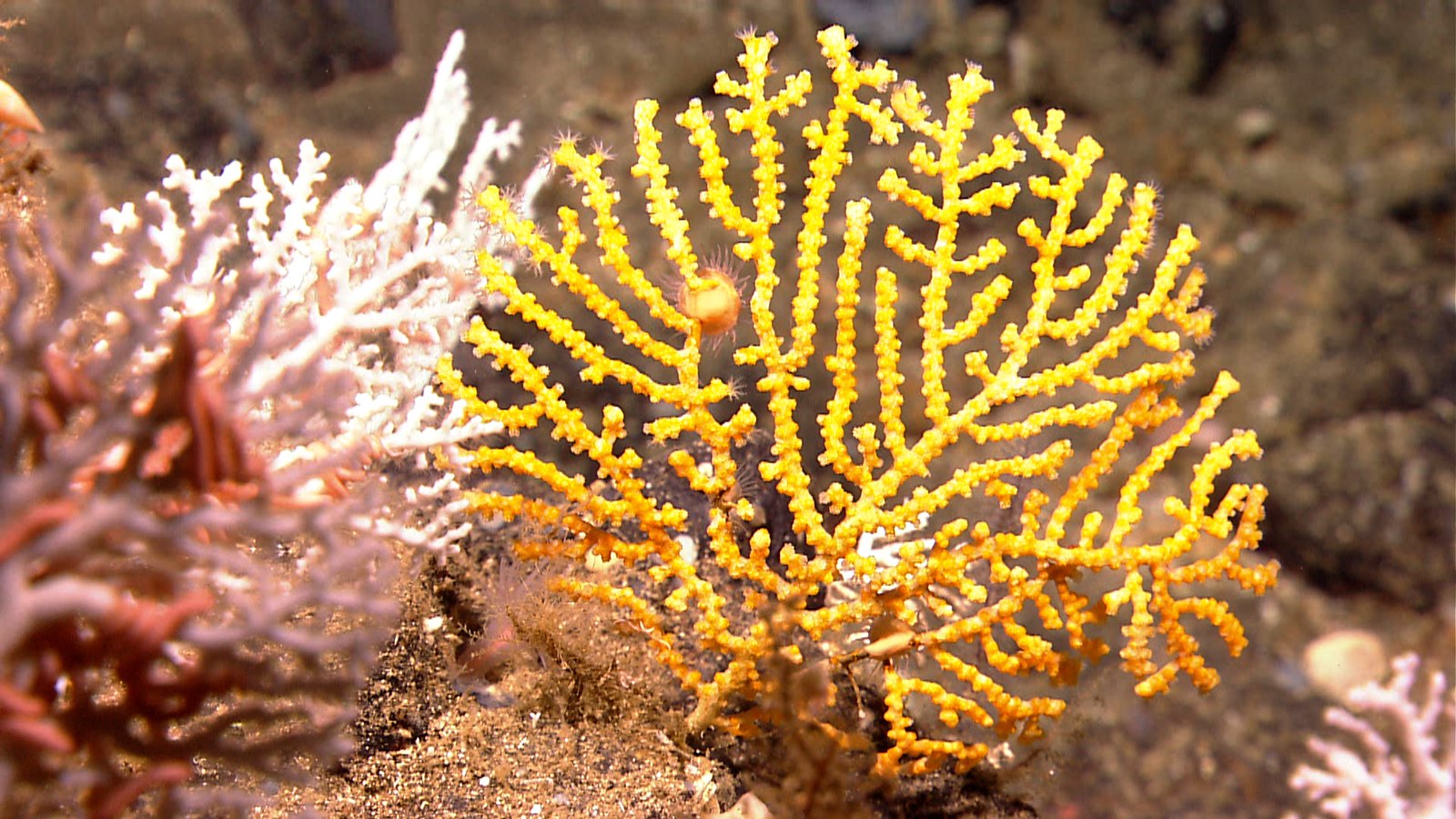 This second post will focus on one of the two subclasses (class Anthozoa) of corals present in the Gulf of Mexico, octocorals. This subclass includes most corals except stony corals and black corals, which are hexacorals.  Many octocorals share similar traits: most are non-reef building, but they can provide vertical relief over areas that are otherwise soft bottoms, such as sandy bottoms. In general, octocorals tend to have large, erect frames that stretch up into the water column above the substrate, but they can also occur as smaller forms, as demonstrated by the two octocorlas found living on a deep sea chimney in the image to the left. Being above the seafloor and in the water column allows the polyps to more easily capture food from the water as it passes by the colony.  Researchers have found colonies so large that the polyps in the center have starved because the polyps on the outside of the colony have captured all the food.

Octocorals get their name because each polyp has eight hollow tentacles containing pinnules, which are small branches. The images to the right and left show upclose views of the polyps, and demonstrate how octocorals get their name. Different species of octocorals are classified according to their sclerites, structures made of calcium carbonate contained within the animal's tissues, as opposed to hexacoral (our next topic) which have their skeleton outside of the polyp bodies.  In octocorals, sclerites can have multiple morphologies, and because they give the coral shape they are how biologists classify different species of octocorals. Right now, there are two DSC groups that octocorals can be divided into: sea pens, and soft corals and sea fans.

Octocorals include blue corals (the only group that lives exclusively in shallow water), sea fans, sea pens, and sea whips, all of which may be familiar to those familiar with shallow water corals. Overall, there are at least 162 named and described species of octocorals in the Gulf of Mexico.

Because octocorals provide vertical relief in otherwise flat areas, there are often other species associated with them.  There have been observations of other animals, such as brittle stars and marine worms, that live on the octocoral, sometimes seen climbing up high, in what scientists think may be an effort to increase their ability to capture food.  Additionally, sometimes these other animals have been observed both feeding on the coral polyps themselves. These corals can also provide an anchor for other organisms, as there have been observations of catshark eggs attached to species of octocoral at depths greater than 1,310 ft.

ROV technology has allowed us to see these interactions that previously may have only been dreamed of by scientists who study the deep ocean.