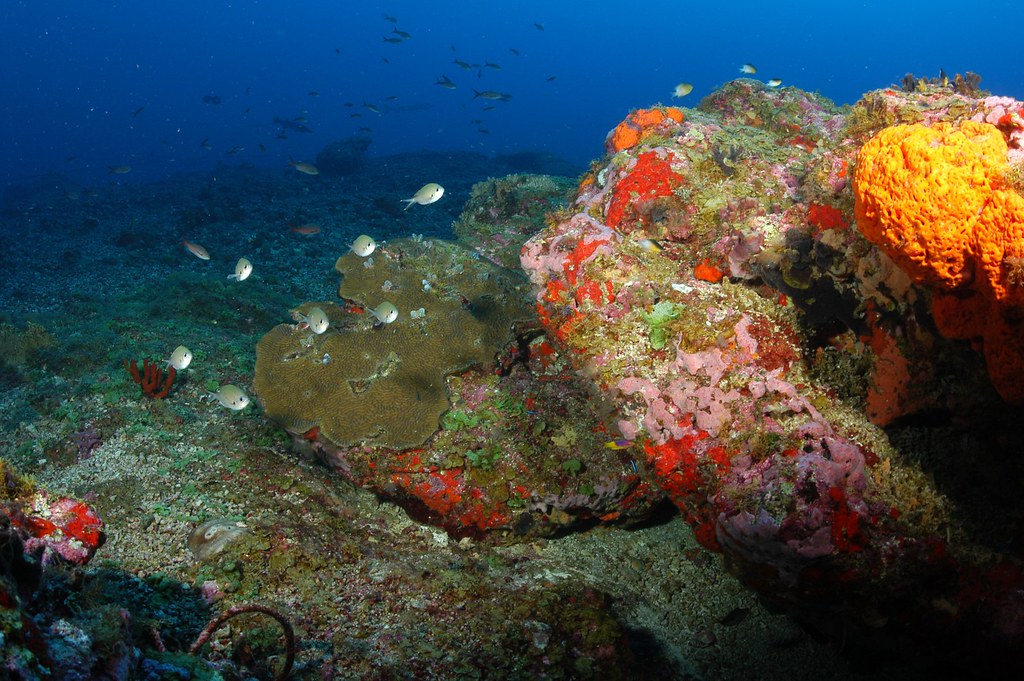 Deepwater habitat at Bright Bank with many species of fish, coral, and sponges. Photo credit NOAA.

Since fish species are not generally associated with one single species of coral but are instead found among multiple species, this post is going to cover different fish and invertebrate species that live in the deep ocean and rely on deep sea corals.

Alfonsino
‍
Alfonsino are commercially fished in New Zealand, but not the Gulf, and there are multiple species that live in the Gulf, including the splendid alfonsino. Because they are commonly associated with reefs and other structures, and they are fished with trawls, there is potential for interaction with coral if fishing were to expand into the Gulf.

Bass
‍
There are many species of bass that are associated with deep sea corals. Some of the species, like black bass can be caught in shallow waters, but have also been found in deep waters.  Roughtongue bass are common enough at certain deep water sites that one Gulf coral site is called “Roughtongue Reef.” Right now, the Gulf of Mexico Fisheries Council is considering new protections for “Roughtongue” and
other corals sites.

Catshark
‍
Catsharks have been associated with deep sea corals as there have been periodic findings of members of the catshark family leaving egg casings attached to deep sea corals.  The first documented occurrence of this happening in the Gulf occurred in 2003, though this discovery was not a surprise as it was a known relationship in other oceans. An unknown egg casing was found attached to a gorgonian coral at a depth of 1,750 feet in Mississippi Canyon.

Conger eel
‍
‍While not commercially important, this eel species (left, among corals, crinoids, and other life) ranges from shallow coastal waters to over 1,565 feet down the continental shelf, normally along structures such as reefs or burrows shared with tilefish. They have been associated strongly with a number of areas that have significant concentrations of coral in the northeastern Gulf.

One of the most commonly cited species with deep sea corals is grouper, and for good reason. Multiple species of grouper live at depths equivalent to DSCs (50m/165ft or greater) and are commonly associated with the reefs, including gag, snowy, speckled hind, warsaw and yellowedge.  Many of the species, including the commercially important red grouper (5.6 million lbs of red group valued at $19 million were landed in 2015)  are often found near habitat that provide hiding places, such as rock outcroppings and reefs, and at depths greater than 164 feet. For example, red grouper has been found at depths from 10 to 656 feet, but prefers 100 - 400 feet, and they have been found in aggregation around deep water reefs off southwest Florida. Snowy grouper (pictured), of which there were 170,000 lbs valued at $635,000 landed in 2015, are a top predator in reefs, eating squid, crabs, and other fish.

There are multiple species of roughy that live in the Gulf, including finescale (or Darwin’s slimehead), Mediterranean slimehead and western roughy. This same species has two names, roughy and slimehead, due to creative rebranding of the fish undertaken in New Zealand when the fishery started and fishermen figured (probably correctly) that “roughy” is more palatable than “slimehead”. Because a substantial commercial fishery does not exist in the Gulf, these fish are often be referred to in both ways. These fish can often be found associated with deep sea relief, such as corals and reefs.
Darwin's slimehead/finescale roughy.

Two species of shrimp associated with deep reefs and corals are brown rock shrimp and royal red shrimp (pictured), landings equalling 817,000 lbs and 278,000 lbs respectively. Rock shrimp, deriving their name from their “rock-hard” exoskeleton, living generally on sandy bottoms near coral and rocks, can be found in waters 80 to 215 feet deep, though they have been found as deep as 600 feet. Royal red shrimp are found at depths of 800 to 1,500 feet on a variety of substrates, including near or on coral.

Snapper
‍
There are many species of snapper that live near deep sea coral reefs for part or all of their lives.  The commercially important species of red snapper (6.7 million lbs landed in 2015, valued at $27 million), yellowtail snapper (2.2 million lbs, valued at $6.6 million), and vermillion snapper (1.4 million lbs, valued at $3.9 million, pictured) all can be found in or around deep sea coral reefs.  As adults, red snapper live near hard structures on the continental shelf , at depths of 30 to 620 feet, near features such as coral reefs. Vermilion and yellowtail snapper both inhabit shallower waters, but can be found at deeper depths as well. Vermillion can live as deep as 400 feet, though they are often caught in waters less than 180 feet, and yellowtail can be found at depths up to 600 feet, though they are commonly found at depths of 65 to 230 feet.

Tilefish
‍
Both Golden tilefish and Blueline tilefish can be found along hard bottoms in deep waters, along with grouper and snapper, along irregular bottoms and rocks/boulders. Other fish and crustacean species are often found near tilefish habitat due to their ability to provide food and shelter. Additionally, tilefish (particularly blueline) may build their own burrows, modify their environment. These fish are commercially important - in 2015 592,000 lbs were landed, valued at $1.7 million