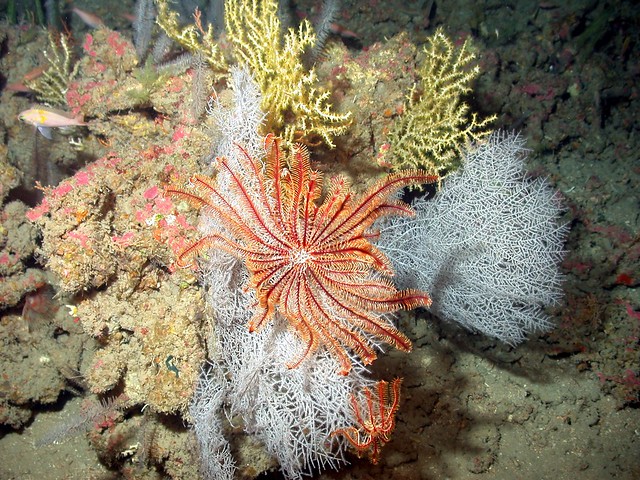 A red crinoid and a white gorgonian. Photo credit: NURC/UNCW and NOAA/FGBNMS.

Sea fans, sea whips and bamboo coral are all members of the order Alcyonacea, one of three orders of octocoral. There are many other types of coral in this order, but these three are common and

interesting deep sea dwelling organisms. Keeping all these corals straight can be confusing because this same order was previously known as Gorgonacea, so corals in the order are commonly referred to as gorgonian corals.

Alcyonacea most commonly occur as branching corals that look like plants, with a main trunk and branching stems (left (white), with an orange crinoid). Ranging from large fleshy masses to smaller feathered-pen-looking organisms, this family of corals is among the most diverse of deep sea corals and are united by having bony skeletons.

There are a number of sites in the Gulf that have uniquely high densities or diversities of gorgonian corals. Three specific sites, Green Canyon 234, Green Canyon 354, and

Sea fans, contrary to their name, are not always fan-shaped. Some, like bottle brush, branch in different directions from a central axis. Bottle brushes tend to have small polyps, while other species of soft corals and sea fans will have much larger polyps. Bubblegum coral, for example, growing up to 20 feet tall, looks very different than bottle brushes. Often pink, bubblegum coral are covered in knobs that look look balls of bubblegum. Sea fans are also unique among corals in that they plant themselves in muddy or sandy bottoms instead of hard substrate like most species of coral need to establish.

Sea whips are a group of corals characterized by long, whip-like branches, with and tend to be brightly colored. The polyps of sea whips grow on top of each other, and are given structure though the spicules within the polyps tissue. Sea whips have anywhere from one one or two branches, up to tens of branches.

Bamboo coral have a unique structure: they have a jointed skeleton. Polyps grow on calcareous portions of the skeleton, which are broken up by protein nodes (in the image, the calcareous portions appear white, and the protein portions appear black). Found as deep as 15,000 feet, bamboo coral is truly cosmopolitan - inhabiting many different oceans at different depths. Bamboo corals skeleton is also being explored for use in bone grafting for humans.