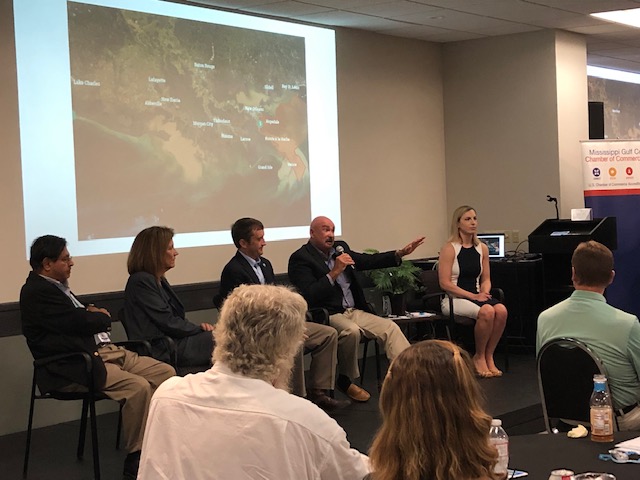 At the Sun Herald newspaper's recent Community Forum on the opening of the Bonnet Carre Spillway and its effects on coastal Mississippi, the discussion moved from the advertised topic to Louisiana's Mid-Breton Sediment Diversion, as yet unbuilt, but part of the Coastal Protection and Restoration Authority's coastal master plan. Unfortunately, the sponsoring Louisiana agency, CPRA, was not represented on the Sun Herald's speaker panel to take part in the discussion.

The Sun Herald’s editor, Blake Kaplan, welcomed about 200 guests to the Knight non-profit center in Gulfport recently for a community forum about this year’s opening of the Bonnet Carre Spillway in Louisiana, and the effects caused by the river water that was routed for a total of 123 days through Lake Pontchartrain into the Mississippi Sound.

‍
We were there to hear a panel of four speakers answer questions from Lauren Walck, the Sun Herald’s senior news editor. Her questions included “When did you first know this event was going to be bad?”, “What is wrong with the Mississippi River water?” “What are the measureable impacts?”, “Who are the decision makers involved with the Bonnet Carre?” and, “What about land loss and the areas around the bird’s foot delta in Louisiana?” Her questions were to Anita Lee, a Sun Herald reporter, Dr. Moby Solangi of the Institute for Marine Mammal Studies in Gulfport, Rick Burris, Director of the Miss. Department of Marine Resources, Marine Fisheries section, and Fishing Charter Captain George Ricks, from St. Bernard Parish, President of the Save Louisiana Coalition (SLC).

‍
Speakers compared notes about the point during the spring of 2019 that they knew a problem existed – when they could see dead or sickened wildlife (dolphins, turtles), or perhaps when sport fish and shrimp had evacuated marshes and bays ahead of the river water. But it didn’t take very long in the questioning for the main issue of the night to arrive. It was in Mr. Rick’s very first answer. After he noted seeing the first dead dolphins on April 10th, he veered into an explanation of the reason that SLC exists - which is to oppose the Louisiana sediment diversions along the Mississippi River, adding, “The Mid-Breton diversion will definitely affect the Mississippi Coast – you guys over here.” This theme took over from the stated topic: the operation of the 2019 Bonnet Carre Spillway.

‍
The issue of potential impacts of Louisiana’s sediment diversions dominated the meeting after this, and the discussion never quite returned to the Bonnet Carre Spillway. We didn’t hear how the State of Mississippi might petition Congress and the Corps of Engineers to manage Spillway openings to be less damaging to the Mississippi Sound. (Delbert Hosemann, Mississippi’s Secretary of State had been talking extensively about this Spillway water management issue during the previous weeks.)

‍
Everyone on the panel agreed on the answer to the second question – that the fresh water from the Mississippi River coming through the Bonnet Carre is polluted with sediment, chemicals and high levels of nitrogen and phosphorous (fertilizer runoff from the farms of the Midwest). People generally agreed that Congress and the Corps were the decision makers about the Bonnet Carre operations.

‍
What mostly happened as the night wore on was a switch from a discussion of the Bonnet Carre Spillway opening to criticism of the Mid-Breton Diversion project, although the diversion structure hasn’t been built yet, the purposes of the Spillway and diversion aren’t the same, and the timing and volumes of Mississippi River water they transmit are different. They don’t deliver discharged river water to the same places either. These important differences became lost.

‍
Nobody on the Sun Herald panel was prepared to speak objectively about the Mid-Breton sediment diversion or about Louisiana’s land loss problem, and Mr. Ricks was skeptical of the basic direction that Louisiana’s Coastal Protection and Restoration Authority (CPRA) has moved for years -  building land in the face of subsidence and sea-level rise. Ricks said: “modeling doesn’t really say how much land can be built, it’s not gonna build that much land - dredges can build land.”

‍
For some charter fishing captains, river diversions will likely change the salinity and ecology of the marshes and coastal waters they now use for their livelihoods. My country doctor grandfather used to say “what side you’re on all depends on whose ox was gored” and one can see what side some charter fisherman might take. The “ox” here is the speckled trout resource - finding them in coming years in the same places they are found today. Fish do move in response to changing ambient salinity, but also move due to variations in water temperature, tides, seasons, and available food. Diversions of river water will make fish adjust their position in marshes and bays.

‍
Ms. Lee and Mr. Ricks commented about who in Mississippi was looking out for the state’s interest. Reporter Lee asked: “Is anyone from Mississippi at the CPRA meetings?” and Ricks responded, “Mississippi officials don’t know what’s going on in Louisiana.” This produced gasps in the room, but wasn’t quite correct.

‍
In presentations I’ve attended by Mississippi’s Department of Marine Resources at its annual “State of Our Coast” conferences it’s been very clear that MDMR (Mississippi) and CPRA (Louisiana) and the Army Corps of Engineers ( the Feds) all talk together about dredging and land building projects in the two states.  I’ve seen presentations by MDMR on proposed beneficial use of dredge sediments, for example at Three Mile Pass on the eastern edge of the Biloxi Marshes where Hancock County borders St. Bernard Parish. The Sun Herald has also attended and reported on every one of MDMR’s “State of Our Coast” conferences. The people in the agencies do know their counterparts across state lines and they talk to one another. To imply that Louisiana and Mississippi operate their coastal programs in total isolation from one another was sensational to hear, but not right.

‍
Perhaps the Sun Herald can do a story soon on this collaboration to offer a balance to its Bonnet Carre Spillway Community Forum which was very interesting, but drifted considerably from its advertised discussion topic.