Common sense and bipartisanship work for the Gulf 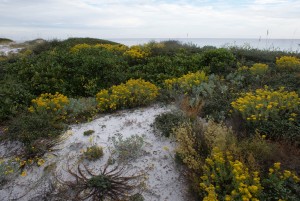 Woody goldenrod blooms along the dunes at Deer Lake State Park in the Florida panhandle. The area is part of the Coastal Barrier Resources System.

The House of Representatives actually got something right. In an age of growing frustration at political divisions that create legislative gridlock, the House did something that most citizens say they want more of: They passed a bipartisan bill. Even better it's one that's good for our environment and the Gulf of Mexico. In this case, H.R. 5787--the Strengthening Coastal Communities Act-- passed by a landslide vote of 375 - 1. The bill helps to protect coastal areas along the Gulf of Mexico and beyond, using modern mapping techniques to correct and expand the boundaries of the Coastal Barrier Resources System (CBRS). The CBRS consists of hundreds of undeveloped coastal areas along the Gulf and Atlantic coasts where federal taxpayer funds may not be used to subsidize development due to the risky and environmentally-sensitive nature of those areas.The program has saved taxpayers over $1.3 billion while helping to protect sensitive coastal areas. The premise is that landowners are free to develop their lands with their own monies, but not with subsidies from taxpayers. That means no artificially-cheap federal flood insurance, beach nourishment funds, or post-disaster monies. In Florida, places such as Lido Key, Venice Inlet, Sanibel Island, and many others are further protected by this bill and its removal of federal subsidies.Our GRN supporters and allies pushed for passage of this bill, and now we're pushing the U.S. Senate to take-up and pass the bill during their remaining time before the holiday recess. You can help us by clicking here to send a letter to your U.S. Senators asking for their support. Even if Senate passage doesn't happen, we have a headstart on getting a future version of the bill through Congress and into law. Protecting and expanding the CBRS is so important in the age of sea level rise and stronger hurricanes, as it helps keep new development out of these high-risk areas. When our coastal barriers and wetlands are free from the heavy hands of development, they can ebb and flow with the vagaries of nature as they soften the impacts of storms and rising seas. If new development does come to these areas, at least with these protections the taxpayers are not on the hook for fixing the storm damages that will surely follow. Common sense, bipartisanship, protecting the environment, saving taxpayer money...H.R. 5787 and the Coastal Barrier Resources System remind us that smart conservation is good for the Gulf coast in so many ways.