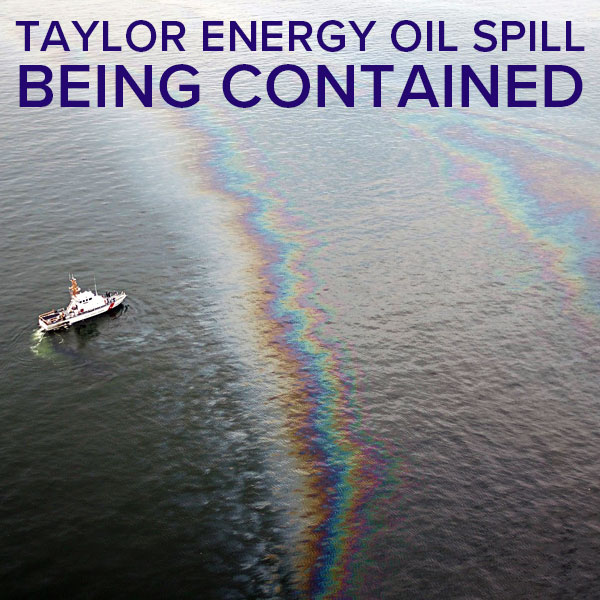 The Taylor Energy oil spill has been dumping thousands of gallons of oil a day into the Gulf of Mexico for more than 14 years. According to the U.S. Coast Guard, the longest oil spill in U.S. history is now being contained.

As a part of court proceedings, the U.S. Coast Guard revealed in a status update that:

“The containment system is now fully installed and operating as planned. The collection tanks of the system have been pumped three times and the recovered oil transported to shore. More than 30,000 gallons of oil have been recovered. Based on the amount of oil captured to date, the Coast Guard is preparing a standard operating procedure for containment operations and maintenance.”

“After 14 years, we are glad the Coast Guard is taking action to contain this runaway oil spill,” said Dustin Renaud, communications director for Healthy Gulf. “Now we must make sure that they follow through on a permanent solution and ensure a spill like this never goes unchecked again. Rather than relying on industry self-reporting in the future, we must employ independent science and hold companies accountable to the law.”

We couldn't do this work without members like you. Please contribute today so that we can continue to defend the Coast Guard's cleanup efforts to ensure that remediation of the Taylor spill is taken seriously and that a long term plan is in place to stop the release of oil into the Gulf of Mexico.

Collapsed wells at Taylor Energy’s drilling site approximately 15 miles off the southeast Louisiana coast have been discharging oil into the Gulf of Mexico since 2004, when Hurricane Ivan caused the company’s oil platform to topple and sink. Neither Taylor nor the federal government had undertaken comprehensive containment or control measures until October 2018, when the U.S. Coast Guard ordered Taylor to propose a plan to immediately contain the ongoing oil release. When Taylor failed to comply with the order, the Coast Guard contracted with a remediation company, Couvillion Group, to work quickly towards capping the spill. Taylor is seeking to reverse that order in federal court. Taylor’s lawsuit seeks to bar any work by the federal government or its contractor on the spill response, effectively asking the court to allow its oil spill to continue indefinitely. Now that the Coast Guard says containment efforts are fully installed and operational, Taylor’s efforts to block containment may be in vain.

“Taylor’s main argument against cleanup efforts has been that the visible sheens are solely residual oil coming from the oil-soaked seafloor, and containment efforts would disturb the seafloor and cause damage to the environment,” said Renaud. “In reality, the seafloor is a part of the environment, and now that the Coast Guard has collected 30,000 gallons of oil, the surface sheen is “barely visible”-- making Taylor’s argument indefensible.”

Healthy Gulf and its partner organizations discovered the existence of the Taylor Energy spill by chance in 2010 when out on a monitoring mission for the Deepwater Horizon spill. Since then, the organization has repeatedly asked the federal government to hold Taylor accountable and stem the uncontrolled flow of oil into the Gulf of Mexico. Now that the government has finally taken such action, Healthy Gulf is moving to help defend that action and ensure that remediation of the Taylor spill is taken and that a long term plan is in place to stop the release of oil into the Gulf of Mexico.

“It’s good news from the Coast Guard that the containment device appears to be working and has already recovered 30,000 gallons of oil.,” said Brettny Hardy, attorney from Earthjustice.  “Now that Healthy Gulf is a party in the litigation, we can continue the fight to ensure that the containment is complete and effective in putting an end to the 14-year long Taylor Energy oil spill.”