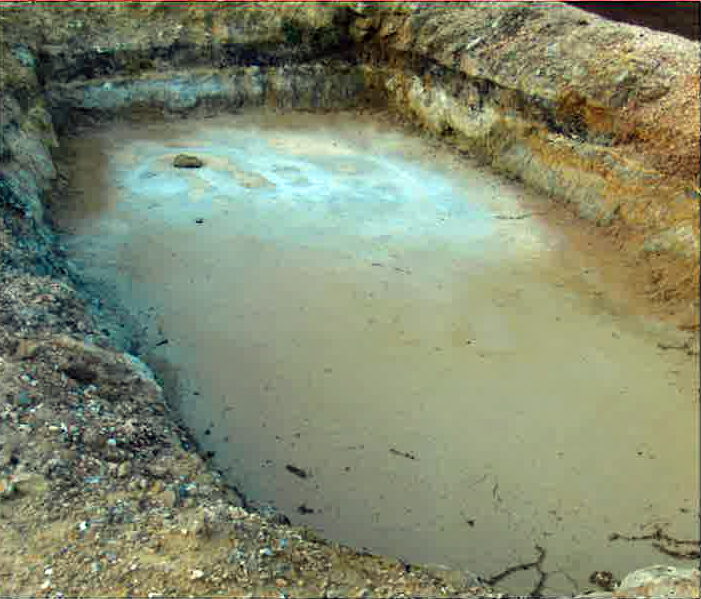 Open pit with oil sheen - component of an oilfiled waste injection well next to Baucum property and home, Laurel, Mississippi

This article updates a blog post from 2014 on the oilfield waste deep injection well on land next to Marlan and Deidra Baucum's home in Laurel, Mississippi. The Jones County Circuit Court decided that it will hear Mrs. Baucum's claims for damage to her health. She is able to avoid presenting these claims to the Mississippi Oil and Gas Board. This agency process can be a quagmire of delay and frustration for a person making a damage claim due to the actions of a company that the Board regulates.

In Laurel, Mississippi, on Monday August 19th Circuit Court Judge Dal Williamson made a ruling on a motion in a civil case for damages to health and property due to oilfield waste pollution in Deidra Baucum’s lawsuit against Petro Harvester and a group of other oilfield service companies. Petro Harvester and predecessor companies operated a saltwater disposal (injection well) that was used for more than 20 years by oil and gas operators in the Laurel oil field. This well is on land adjoining the Baucum’s land and home in Laurel. Mrs. Baucum, now has a type of cancer that may be linked to her chemical exposure, and her attorneys asked the Circuit Court to allow her case to be heard as a lawsuit in that court rather than make her present her claims to the State Oil and Gas Board in an agency administrative hearing.

‍
In this situation, it is important to note that the offending waste disposal well was permitted by the Mississippi Oil and Gas Board, and according to documents presented as evidence to Judge Williamson, state inspectors visited it numerous times and allowed the well to continue to operate over almost two decades. This was despite the presence of open waste pits adjacent to the well, a messy worksite, and clear signs of contamination of soils by spilled petroleum products and liquids near the well. These things should have been obvious to state inspectors and were even noted in the due diligence reports that Petro Harvester obtained at the time it purchased the disposal well from another company.

‍
Mrs. Baucum’s attorneys challenged the jurisdiction of the Oil and Gas Board to hear her claims by citing legal precedent from a group of Mississippi state court cases that give exceptions to the jurisdiction of the State Oil and Gas Board. This was done to free her from the requirement of exhausting her administrative remedies at that agency. For some of her claims, it worked.  Judge Williamson agreed that a type of exception was applicable to her personal injury claims and ruled on the motion presented by attorney Mike Simmons of Jackson so that part of her suit’s claims can remain in Circuit Court while others are heard by the Oil and Gas Board. Baucum attorney David Baria explained, “When the property at issue is not subject to a lease or within a unit agreement, and the claims are in the nature of personal injuries, parties such as the Baucums may choose to seek relief from Circuit Court.”

‍
The legal concept of “exhaustion of administrative remedies” means that people’s claims or appeals relevant to agency matters must be presented to a state agency hearing officer so the agency has a chance to provide relief before the people take their claims to the Mississippi court system. In most instances, the state agency stubbornly defends its actions and provides no relief on hearing the claim or appeal, and the person making the claim gains nothing and loses precious time before being able to file the matter as a suit in a state court.

‍
The result of the Judge’s ruling was good news because the Circuit Court of Jones County will retain jurisdiction over Mrs. Baucum’s claims for personal injury, pain and suffering, and her medical costs.  Petro Harvester and the other service companies that operated the disposal well should have their activities and records examined in a trial.  By allowing her injury claims to be retained by the local Circuit Court, what the Judge did for Mrs. Baucum was helpful and should save some time. The State Oil and Gas Board can be a frustrating place to present damage claims for neighbors of oilfield operations like this.  The ruling was a compromise; at least some of Mrs. Baucum’s claims can avoid the administrative appeal process at the agency. Claims for property damage to her land, Common Law nuisance claims, and infringements on quiet enjoyment of property will nevertheless be routed to be heard by the Oil and Gas Board, and the agency itself may have to do more testing at the wellsite and on the Baucum’s property to determine how far the petrochemical pollution has spread from the well.

‍
The case speaks clearly about how people dislike the state agency administrative law process in Mississippi. The Oil and Gas Board isn’t the only administrative agency appeal board that people would avoid if they could. The Mississippi Department of Environmental Quality has its Environmental Permit (MDEQ) Board that regularly disappoints people who oppose permits that allow polluting industries to be built too close to their homes, so that property value, community and human health are threatened. The disposal well near the Baucum property in a Laurel neighborhood should probably never have received a permit for operation from the Oil and Gas Board. Petro Harvester certainly shouldn’t have been allowed to continue taking waste for disposal if the well was already documented polluting the soil and water around it. Inspections by the state regulators should have revealed the problems.

‍
When people confront one of these situations, jumping through hoops to exhaust their administrative agency remedies is a terrible drain on limited resources: time, money, patience, morale and community cohesion. Fortunately, Mrs. Baucum has very solid legal representation to help her navigate a daunting process.   People are often confused by the agency administrative appeal process and hurt financially by its results. Overall, this creates distrust toward state agency administrative boards. Permitting decisions coming from the Mississippi Oil and Gas Board and the MDEQ Permit Board disrupt people’s lives and diminish property values. They find it strange and disorienting to be in adversarial positions against state agencies that their own taxes support to protect their health. Finally, without the services of an attorney, most people are at a severe disadvantage when they oppose a permit for a poorly conceived project, seek enforcement for a permit violation, or present an appeal or damage claim.