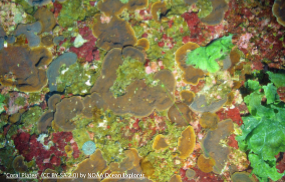 This blog series has covered a variety of corals that live in theGulf of Mexico. These corals are an amazing natural resource for theGulf, but they are also under threat. Right now, the Gulf of Mexico FisheryManagement Council is considering extending new protections to 15 deepwater coral sitesin the Gulf. An additional eight areas were identified as unique or importantsites, but were not given any fishing regulations which would protect thecorals - the logic being a lack of regulations due to a lack of current fishingefforts.

Many of the images used inthis blog series have come from expeditions in the Gulf that is exploring thesesites. More images of deep sea corals may be coming soon as there is currentlyan expedition off the Florida coast.

Many of the sites proposed forprotection are unique in some way - either in terms of number of corals,diversity of corals, or other important ecosystem functions. The sites werepicked by scientists and stakeholders by dividing the Gulf into four zones, andthen identifying 47 specific locations for protection. The 15 sites that arecurrently up for protection were reached through conversations with the ShrimpAdvisory Panel.

Pulley Ridge, locatedoff Florida about 100 miles west of Key West, is one site up for additionalprotection measures.  While parts of the site are already

protected, the currentlegislation is expanding the area to protect the numerous species of platecoral (a type of hexacoral), black coral, and sponges.Additionally, parts of the extended area are known to have red grouper pits,which not only serve as the groupers home territory, but also add to the diversity of the seafloorby attracting a wide range of organisms.

Roughtongue Reef, locatedoff the coast of Alabama, is very steep and is dominated by black cup coral andstony coral, but also has octocoral, sponges, and other marine animals. This site received its name due to the high occurrence of roughtonge bassobserved at the site.

Viosca Knoll 862/906, alsooff the Alabama coast, has some of the densest live corals in the Gulf, andvery high fish densities.  Some of the species associated with this siteinclude snowy grouper, barrel fish, blackbelly rosefish, roughies, andtinselfish. Royal red shrimp are also commonly pulled up from around this site.

Green Canyon 852, locatedoff Louisiana, is the only current site up for protection that has documentedprecious corals (right).  Precious corals, which can be polished to reveala high luster and are thus valued in jewelry, tend to be quite slow growing(even for corals) making it harder for them to recover. Harvesting has notoccurred in the Gulf, but does in other places where these corals can be foundsuch as Hawaii.

Unnamed Bank (Harte Bank),located off southern Texas, is one of a series of sites that provide “biotic stepping stones fororganisms migrating from the southern Gulf to the northern Gulf”. This siteis unique from the others due to its fish and coral assemblage. Harte Bank hashigh fish diversity (in addition to high coral diversity) included ofroughtonge bass, amberjack, and red snapper.

Below is a list of all thesites up for protection - more information at detailed descriptions about eachones and its individual coral assemblages can be found here.

Areas that were recommended tobe HAPCs with no fishing regulations: