A holiday gift from Washington: Good news for the Florida coast 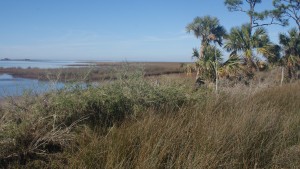 Along the shores of Florida's St. Joseph Bay, where the Coastal Barrier Resources System helps to protect the area from unwise development while also saving taxpayer money.

�A bit of bipartisanship snuck into the holiday season, and thousands of acres of dunes, seagrass beds, and other coastal habitat in Florida is all the better for it. On December 21, 2018, President Trump signed into law H.R. 5787�the Strengthening Coastal Communities Act of 2018. Out of 435 members of the House of Representatives and 100 Senators, only one nay vote was cast. The bill helps to protect coastal areas along the Florida Gulf coast and beyond, using modern mapping techniques that correct and expand the boundaries of the Coastal Barrier Resources System (CBRS). The CBRS consists of hundreds of undeveloped coastal areas along the Gulf and Atlantic coasts where Federal taxpayer funds may not be used to subsidize development due to the risky and environmentally-sensitive nature of those areas. That means no artificially-cheap Federal flood insurance, beach nourishment funds, or post-disaster monies�all of which help to fuel coastal development. While the bill's remapping of these areas may sound somewhat mundane, the real impact is that thousands of acres of barrier islands, dunes, wetlands, open water, seagrass beds, and mainland shoreline in Florida was added to the CBRS. I've seen firsthand the positive impacts of CBRS protection in places like Cape San Blas in the Florida panhandle�the most rapidly-eroding part of the entire FL coast. Coastal property owners there are funding beach renourishment the old fashioned way: They're paying for it themselves rather than relying on Federal taxpayers. Meanwhile, the lack of Federal subsidies has likely helped to contribute to diminished development pressures (and the resultant septic tanks and stormwater runoff) in this high-risk, flood-prone area. That's a huge benefit in protecting water quality in the adjacent St. Joseph Bay, which is an incredibly unique waterway of clear water and lush seagrass beds that looks more like the tropical Caribbean. The Bay supports bay scallops and many species of fish and invertebrates that depend on the highest quality water and habitat. It's one of those little gems that makes the Gulf Coast so special. We extend our fullest thank you to the many loyal GRN supporters and allies who pushed for passage of this bill. Your voices made a difference!��